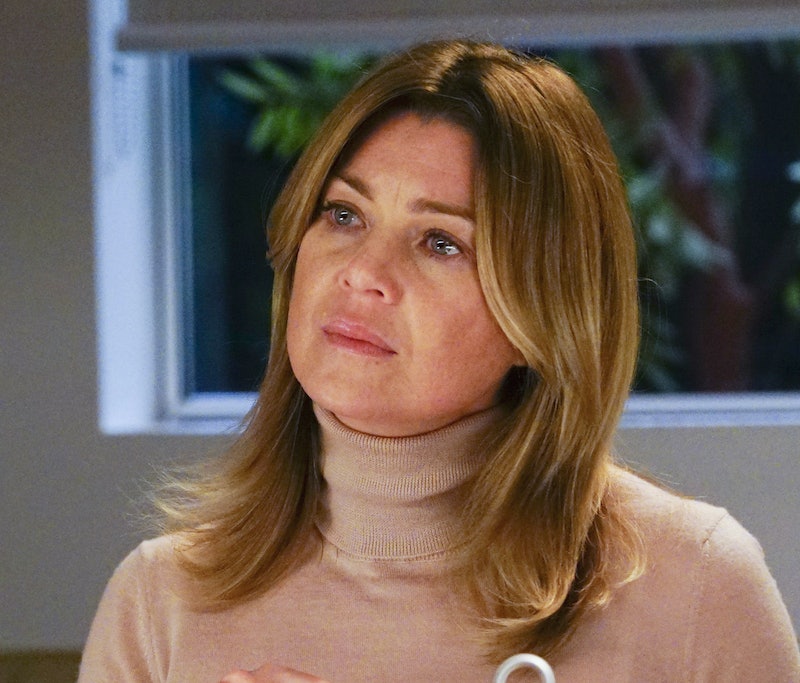 Like many TV productions right now, Grey's Anatomy's filming schedule has also been impacted by the coronavirus pandemic. On March 12, Deadline reported that the medical show had suspended production "out of an abundance of caution," with just 21 of the 25 Grey's Anatomy Season 16 episodes filmed. Initially, that shutdown was supposed to be for two weeks, but with the pandemic escalating, there's no sign of a return to normalcy for TV shows.

Update: On Friday March 27, The Hollywood Reporter reported that Grey's Anatomy would not resume production on Season 16, cutting the season from 25 episodes to just 21. The finale for Season 16, "Put On A Happy Face," will air on April 9.

A rep for the show tells Bustle that the next three Grey's Anatomy episodes will air as scheduled on Thursday nights at 9 p.m. ET. That takes the series up to the 21 episodes it completed before production was suspended. It's unclear when or if the remaining four episodes will be filmed and released. Some affected shows have simply decided to cut their seasons short. According to TV Line, the CBS show FBI will come to an end on March 31, three episodes shy of its original season order. Fox's medical show The Resident comes to a close on April 7, also three episodes short of its Season 3 order.

Even if production can start back up again soon on Grey's Anatomy, they may not have the necessary props to use in filming. Deadline reported that Grey's donated its back-stock of medical equipment like gloves and gowns to local healthcare workers to aid in the fight against coronavirus. Executive producer Krista Vernoff said, "We are all overwhelmed with gratitude for our healthcare workers during this incredibly difficult time, and in addition to these donations, we are doing our part to help them by staying home."

No decision has been made as to whether Grey's will simply cut Season 16 short or eventually get those remaining episodes out. But, in the meantime, fans can count on at least three more weeks of the show's normal scheduling. Here's what viewers can expect from the remaining episodes.

Synopsis: "Richard preps to present his PATH pen at the LA Surgical Innovation Conference but becomes distracted by his issues with Catherine. Maggie and Teddy run into people from their past at the same conference, while Hayes relives moments from when he met his late wife."

Synopsis: "Owen and Link treat an older woman who wakes up from surgery and can’t stop singing, while Teddy helps Koracick stay afloat after an estranged loved one from his past comes to the hospital looking for help. Meredith, Bailey and Maggie focus their efforts on a difficult patient with a tricky diagnosis."

Synopsis: "Link tries to convince Amelia to take it easy during the final stage of her pregnancy. Hayes asks Meredith a surprising question, and Owen makes a shocking discovery."

In the short term, the fate of Grey's Anatomy Season 16 is a mystery beyond April 9. But, in the long term, the show has already been renewed through Season 17. At some point, when this pandemic is finally over, fans will get more episodes. It's just a matter of waiting this hiatus out and knowing that we'll be back at Grey Sloan Memorial in due time.

More like this
Ellen Pompeo & Patrick Dempsey Just Showed Why They Should Team Up Again
By Brad Witter
This House of the Dragon Character Will Create Another Scandal For Rhaenyra
By Kadin Burnett
Nicola Coughlan Shared A Lady Whistledown Excerpt From ‘Bridgerton’ Season 3
By Grace Wehniainen, Alyssa Lapid and Sam Ramsden
Devi Is Going To Meet A “Smoldering Bad Boy” In ‘Never Have I Ever’ Season 4
By Jack Irvin and Gabrielle Bondi
Get Even More From Bustle — Sign Up For The Newsletter