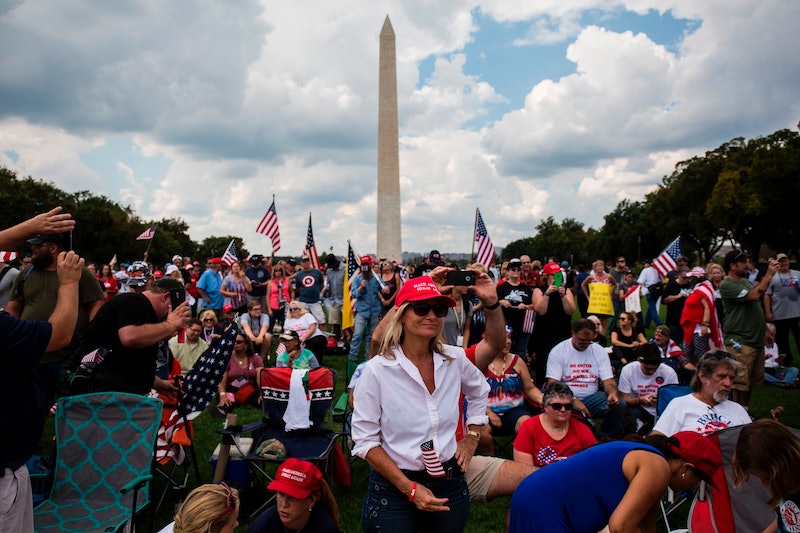 What was hailed as the "Mother of All Rallies" turned out to be more like the Baby of All Rallies, drawing not even 200 people to the National Mall in Washington D.C. on Saturday. But despite being billed by its promoters as the "Woodstock of American Rallies," turnout for Saturday's "Mother of All Rallies" was low. Real low. According to reports, attendance for the conservative pro-Trump rally fell significantly short of initial expectations.

Last month, the National Park Service in Washington said it believed Saturday would turn out to one of its busiest days of the year as some 30 events were set to compete for space and attention on federal park land throughout the city. Initially organizers behind the "Mother of All Rallies" had estimated that thousands of people would descend on the nation's capital for their event. In fact, the rally, which promoters billed as the "Woodstock of American Rallies," was expected to be one of the day's biggest and most noteworthy events with some 2,000 people marking themselves as "going" on the event's Facebook page. Another 6,000 people were marked as "interested" in attending.

In a statement given to CBS News last month, one of the main organizers behind the "Mother of All Rallies," who goes by the monikers "TommyGunn" and "The Pissed off American" – but whose real name appears to be Tommy E. Hodges Jr. – said he'd been inspired to organize the rally by a desire to create a "huge" event for supporters of President Donald Trump. Moreover, the event's Facebook page stated the goal was "to rally 1 million patriots to Washington D.C. to send a shock-wave message to the world that they have to go through us to take this country or change its culture."

Yet photos of the rally's small turnout drew jokes and comparisons to previous events held at the National Mall from several users on Twitter. One Twitter user called the event "itty bitty." Another joked they'd "seen bigger crowds at Whole Foods." Another compared photos of the "Mother of All Rallies" to photos taken during The Women's March on Washington, which, according to crowd counting experts, drew at least 470,000 people.

While the organizers behind the pro-Trump "Mother of All Rallies" stressed the event was open to "all people regardless of race, religion, sexual orientation, age, or political affiliation," many reporters covering the rally reported seeing members of white nationalist groups. Among the allegedly white nationalist groups documented at the "Mother of All Rallies" was the Indiana-based American Guard, which sprung from a U.S. chapter of Soldiers of Odin, an anti-immigrant and anti-refugee group, in 2016.

The "Mother of All Rallies" was billed by organizers on its official Facebook event page as an event focused on "protecting and supporting President Donald Trump, protecting our Constitution, and protecting our flag and all that it stands for." In a statement posted to the "Mother of All Rallies'" official website, organizers claimed the event would send a message "that the voices of mainstream Americans" needed to be heard. It was not made clear who the group considered to be so-called "mainstream Americans."

"Due to increasing political and social unrest, many believe that core American values, customs and traditions are being sacrificed," a statement on the rally's official website notes. "Rally participants will demand protection for traditional American culture while they express their love for the United States and the America First agenda."

Across the National Mall, a separate and unrelated protest organized by fans of the hip-hop duo Insane Clown Posse, who call themselves Juggalos, appeared to outnumber attendees at the "Mother of All Rallies."