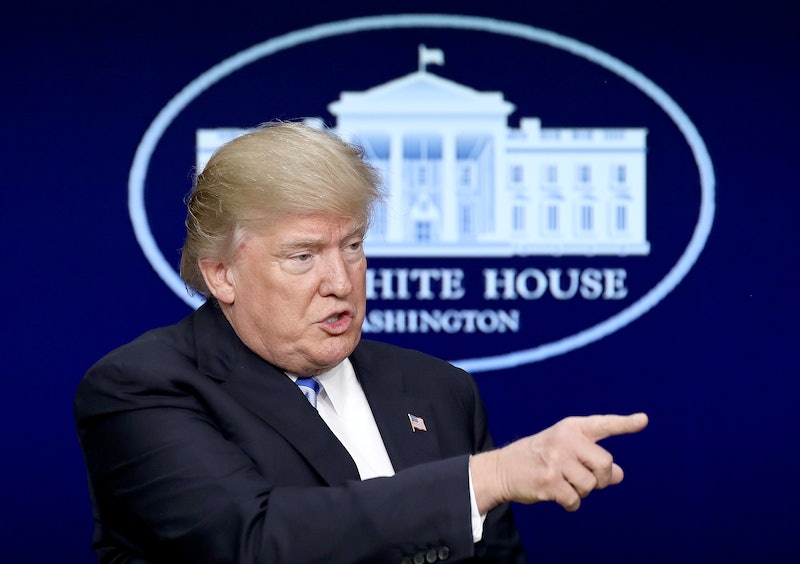 Earlier this week, the Assad regime unleashed a chemical gas in Syria that, according to The New York Times, is one of the worst chemical attacks since the beginning of the civil war in the nation state. The airstrikes by the Syrian government targeting the rebels sparked international outrage, and in a contradiction to countless previous statements, President Donald Trump reacted with an unexpected missile strike against the before-loyal-to-him Assad regime. The attack, of course, also took a human toll — how many people died in Trump's airstrike?

The latest body count of the unannounced U.S. attack, in which 59 Tomahawk cruise missiles were aimed at a Syrian air base, adds up to nine civilians, according to The Telegraph. Of those nine civilians, four are children. This, on the heels of the original attack by the Syrian government against its own people which claimed the lives of 72, including 20 children (at time of writing).

This attack is the first of its kind from the current administration. Even after Trump has been adamant about not getting entangled with the unfathomable human destruction happening in Syria since taking office, not to mention a number of warnings and criticism in 2013 to the Obama White House, this was, according to the White House, a necessary reaction to what President Trump says "crosses many lines."

But Trump has officially changed his tune, saying immediately after the attack by Assad: "I will tell you, what happened yesterday is unacceptable to me. ... And I will tell you, it’s already happened that my attitude toward Syria and Assad has changed very much."

Many others are in support of Trump's pivot. At the forefront of that backing is the United Kingdom — a spokesperson for Prime Minister Theresa May said on Friday, "The UK government fully supports the US action, which we believe was an appropriate response to the barbaric chemical weapons attack launched by the Syrian regime, and is intended to deter further attacks." U.K. Defense Secretary Sir Michael Fallon went even further to comment, "I hope Russia will learn from what happened last night and use its influence against Assad to bring this slaughter to a stop."

But Russia may not be interpreting the attack as a teachable moment, instead condemning the U.S. over the attack, and even going as far as to say that Syrian rebels were to blame for the nerve-gas attack on innocent civilians — an accusation that, in a statement to Reuters, U.S. officials reject.