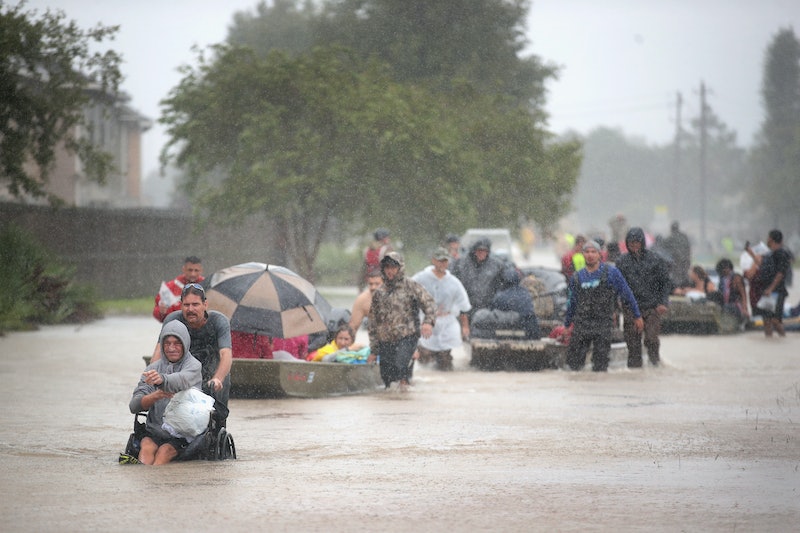 After making landfall in Texas on Friday, Hurricane Harvey forced thousands to evacuate the most heavily hit areas, particularly the city of Houston. With the storm still currently active, the exact number of people who have had to leave their homes has yet to be determined, but officials estimate that 30,000 will end up having to seek refuge in shelters.

"Once we move them we’re able to extract them from different areas; we've got to get them into shelters,” said Brock Long, emergency administrator for the Federal Emergency Management Agency said during a press conference on Monday. “This shelter rescue is going to be a very heavy lift. We're anticipating 30,000 people placed in shelters temporarily to basically stabilize the situation and provide for their care.”

By Sunday evening, somewhere between 800 and 1,200 people in Galveston County had been rescued, according to County Judge Mark Henry. By Monday, The Red Cross had served around 2,500 Houston residents in the George R. Brown Convention Center, where the organization had set up a makeshift hospital. The city of Dallas will be opening a "mega-shelter" on Tuesday morning with the capacity to accommodate 5,000 evacuees.

Despite the dire weather forecasts, not everyone chose to leave. Roughly 5,000 residents of the city of Rockport, where one person was discovered to have died in a fire after Harvey's landfall, opted to remain for the storm.

Nearly half a million people are expected to seek emergency aid in response to the hurricane. "Underneath the president's disaster declaration, we have turned on what we call individual assistant programs,” said Louis Uccellini, director of the National Oceanic and Atmospheric Administration. “We are expecting, based on this event, over 450,000 potential registers of disaster victims. That is a huge number but we are ready to go, process. We've already processed nearly 15,000 calls over the last 24 hours.”

Some Texas officials have been criticized for not mandating evacuations after learning of the hurricane's severity. Houston Mayor Sylvester Turner, who had previously told residents to not evacuate and to instead ride out the storm, responded to the criticism by insisting that instructing an entire city to leave would've resulted in more damage.

"You literally cannot put 6.5 million people on the road," Turner said Sunday. "If you think the situation right now is bad, you give an order to evacuate, you are creating a nightmare." The mayor added that, unless an evacuation is prepared far in advance, calling for one would "literally [put] people in harm's way" and create "a far worse situation."

More like this
Chris Kaba's Family Continue Fight For Justice After Viewing Police Bodycam Footage
By Sophie McEvoy
5 Ways To Help People Impacted By Hurricane Ian In Cuba & Florida
By Emma Carey
Black History Month UK’s 2022 Theme Calls For Action, Not Words
By Maxine Harrison
Mel B Speaks Out Against Domestic Violence In A Powerful Speech
By Sophie McEvoy
Get Even More From Bustle — Sign Up For The Newsletter