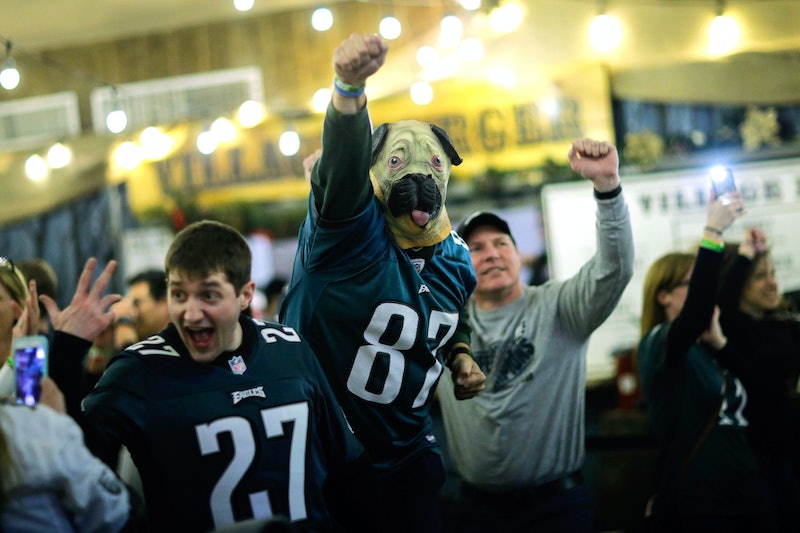 Perhaps the singlehandedly most anticipated sporting event of the year, the Super Bowl attracts viewers from all walks of life — football fans or not. How many people watch the Super Bowl each year varies a tiny bit from year to year, but usually over 100 million people tune in either for the game or the half time show.

ESPN reported that NFL game viewership fell by nearly 10 percent this season, but even if that percentage is skimmed from last year's rating, that still puts estimates well ahead of the 100 million mark. ESPN's Darren Rovell points to several factors for the overall season decrease. Among them are President Donald Trump's tirade against the NFL (whose ratings he repeatedly mocked), which hinged on the #TakeAKnee protest. But, Rovell writes, the league faced other issues this season, including changes to how the league airs commercials, and generally dropping cable subscriptions.

Whatever the reason, folks tend to tune into the big end-of-season game, and this year isn't expected to be much different. Last year, the Super Bowl boasted about 113.3 million viewers, according to Nielsen, a research organization that tracks media ratings. That was a slight decline from the year prior, when 113.9 people watched. But, slight decline aside, Nielsen also reported that 70 percent of televisions on in the United States were switched to the Super Bowl.

The Super Bowl is, at its core, a display of nationalism. As sports games often do, it bolsters a sense of patriotism, even though its commercial success relies on evoking intense regional pride. This is especially true when you consider the sheer number of American viewers that watch the show, and the fact that no matter who wins or who loses, it's always going to be an American team. People dress up, yell, cheer, and celebrate their allegiance to their favorite team, and when their team wins, it evokes a sense of pride not unlike, say, the way that more traditional patriotic events might affect others.

(Of course, it's worth mentioning that part of American patriotism relies on the First Amendment, which guarantees freedom of speech. So, engaging in protests at a national sporting event doesn't necessarily mean that participants are demonstrating against the United States.)

And, team preference isn't generally a decision you make autonomously as an adult. While it is possible, and it can happen, many NFL fans are raised to be NFL fans, with team allegiances encouraged at a young age. (A simple search for baby NFL outfits yields seemingly limitless options.) As such, cheering on any given team can be as much a product of local pride as it is a family bonding experience. To many NFL fans, Super Bowl Sunday is as much a holiday as any that are legally recognized.

All of this results in one fact: the Super Bowl is one of the most widely-viewed events on television, year after year. Sports Illustrated reported that 19 out of the 20 most-viewed television programs of all time have been Super Bowl games, with the single exception being the series finale of the now-defunct television show, M*A*S*H.

Increasingly, the big game has a bit of something for everyone — music fans tune into the halftime show, football fans tune into the game itself, and for the rest, there are the commercials, which reportedly go for about $5 million per thirty seconds. What will and will not happen is discussed intensely in the weeks leading up to the game, and again for several weeks (or years) afterward. It seems that just about everybody has at least one strong opinion about one or another aspect of the spectacle, and 2018, viewership numbers aside, doesn't look like it's going to be any different.