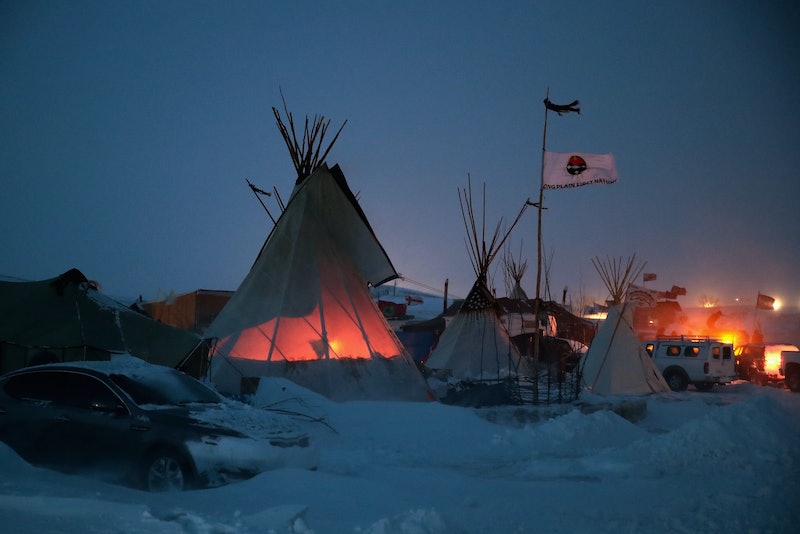 Following the expiration of a 2 p.m. deadline to leave the Dakota Access Pipeline protest camp or face arrest, many people seemingly chose the former option. According to Lt. Tom Iverson of the North Dakota Highway Patrol, 10 people were arrested at Standing Rock by Wednesday evening. The camp is now officially closed, though another estimated 25 to 50 people remain in the encampment.

The Oceti Sakowin camp has served as a gathering place and home for Dakota Access pipeline protesters for months. Indeed, at its most populous point, the camp reportedly held over 10,000 protesters. The camp's closure comes after the issuance of an easement (ordered by Donald Trump) that will allow Energy Transfer Partners, a natural gas company, to complete the pipeline project.

Many protesters have voluntarily left the camp since it was announced earlier in February that the camp would be closed. Additionally, about 100 people left the camp on Wednesday morning ahead of the deadline, and continued to wave flags as they exited the camp.

Protesters have pursued a variety of paths after leaving the camp. Some chose to move to other pipeline protest camps, including nearby Sacred Stone camp. Others have likely headed home, either with their own resources or through the state of North Dakota's offer to pay for a bus ticket out-of-state for protesters exiting the camp.

Of course, despite the camp's closure, up to 50 people still remain in the camp, according to North Dakota Gov. Doug Burgum. As of Wednesday evening, the state's governor also said the remaining protesters will be able to exit the camp Thursday morning without facing arrest, unless of course, they resist.

Those who are staying remain steadfast in their commitment to the camp. Valerie Armstrong, who chose to start building a house in the camp to signify her intention of staying long-term, stated to CNN,

"I'm not going anywhere. I carry a knife with me all the time. But I am handing that over so that I have no weapons on me. I will stay and pray, even if they come to remove us."

However, former campers have expressed concern for the safety of their fellow campers who chose to remain. In an interview with The Guardian, former camper Floris White Bull stated,

"I’m praying for no loss of life. I’m praying that no one gets hurt ... I know for a fact that every single person that’s going to be forcibly removed … is going to be traumatized and suffer distress."

While the Oceti Sakowin camp is officially closed, it is important to remain vigilant about ensuring that those who chose to stay in the camp are treated with respect and dignity by law enforcement and that their rights are protected. While the arrest count for Wednesday was relatively low, that does not mean that there does not still exist a risk for remaining campers. It also certainly does not mean that the protest against the construction of the Dakota Access Pipeline is over—just that it has moved elsewhere, to other camps and to the courts.