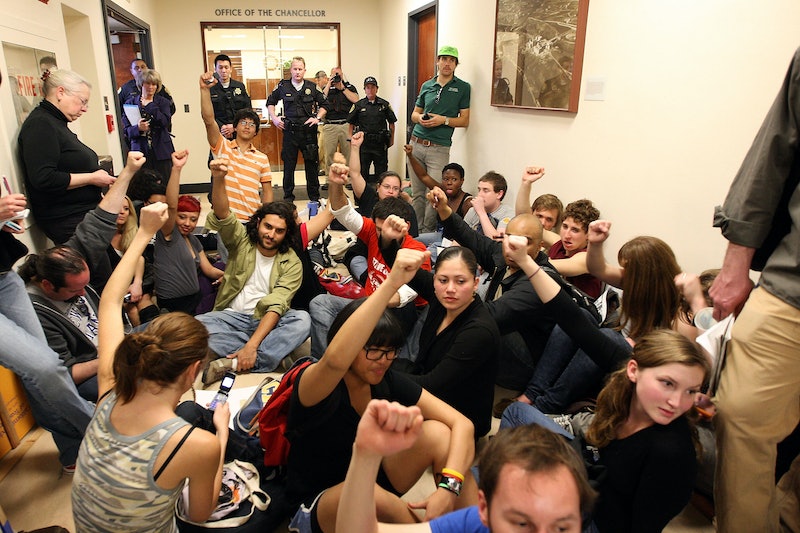 One month after the mass shooting at Marjory Stoneman Douglas High School in Parkland, Florida, students and teachers around the country will stage a walkout protesting gun violence in the United States. There are currently thousands of schools participating in the National School Walkout, which will last for 17 minutes — one minute for each victim of the massacre.

The walkouts, which are the idea of EMPOWER, the youth branch of the Women's March, are occurring all over the country and even internationally, with one in Mexico and one in Canada. According to the walkout's website, more than 2,545 schools will see walkouts Wednesday. Students want to use their voices to enact change when it comes to gun legislature in America, which currently has the 31st highest rate of gun violence in the world.

"We are not safe at school. We are not safe in our cities and towns," the Facebook event for the protest, "Enough! National Student Walkout," reads. The ultimate goal of the walkouts is to get Congress to "take meaningful action to keep us safe and pass federal gun reform legislation that address the public health crisis of gun violence."

More and more students continue to register events at their schools in the days leading up to the national walkout. To organize your own, EMPOWER offers tool kits and host guidelines, including what, specifically, they'd like from Congress. The list of demands includes an assault weapons ban, a ban on high capacity magazines, expanded background checks, a federal gun violence restraining order law, funding for research on gun violence, and promotion of safe storage laws, which encourage responsible gun-owning practices.

"Students and staff have the right to teach and learn in an environment free from the worry of being gunned down in their classrooms," EMPOWER said in a statement. "Parents have the right to send their kids to school in the mornings and see them home alive at the end of the day."

In the wake of the Parkland massacre, students who survived the shooting have been vocal advocates for responsible gun legislation. "If all our government and president can do is send thoughts and prayers, then it's time for victims to be the change that we need to see," said Stoneman Douglas senior Emma Gonzalez.

Since the time of the Founding Fathers and since they added the Second Amendment to the Constitution, our guns have developed at a rate that leaves me dizzy. The guns have changed, but our laws have not.

EMPOWER is also offering students interested in hosting their own walkouts the aid of an "adult ally with experience in organizing," according to the group's tool kit. And they're offering template letters for students to send to their administration in order to get their support.

Organizers have stressed, however, that anyone not affiliated with a school not participate in the walkouts, due to safety concerns. But if you still want to show your support for the movement, EMPOWER encourages people to wear orange and/or walk out of their workplaces for 17 minutes on Wednesday.

According to CNN, many schools are approving the walkouts, and some have provided additional security for students. Others, however, are asking the students to protest in different ways. For instance Washoe County School District in Nevada wants students to do things like "tying ribbons on the school fences or observing moments of silence," according to ABC affiliate KOLO, and Chesterfield County School officials in Virginia told students they can either hold a memorial service for the Parkland victims, or an assembly about school safety, according to CBS affiliate WTVR.

Following the National School Walkout on March 14, there will be a March for Our Lives protest on Saturday, March 24, which began with Parkland survivors. Thousands across the country will once again demonstrate against gun violence in America and further pressure Congress to act.