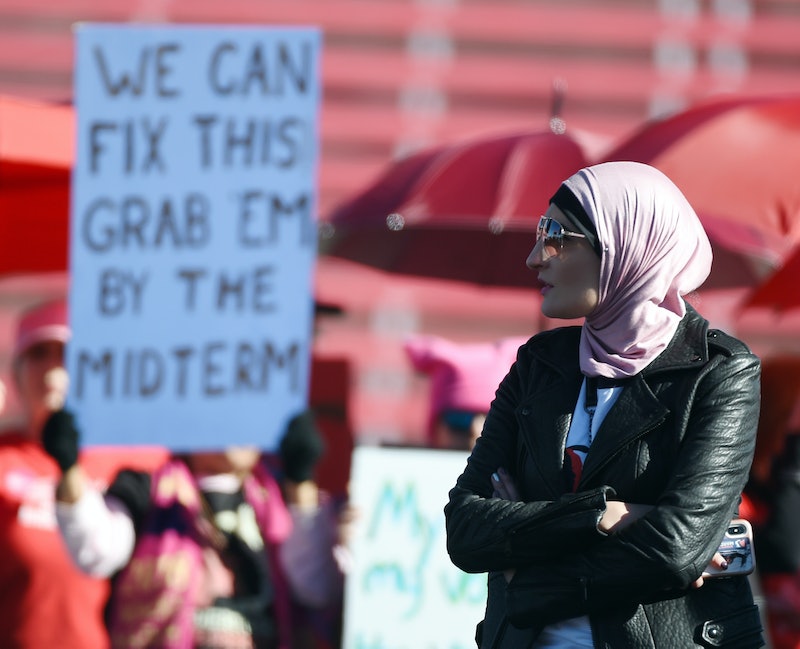 Last year, Virginia's House of Delegates — the state's local legislature — witnessed a wild upset when Democrats flipped 15 seats previously held by Republicans. That upset was compounded by the fact that 11 of those 15 newly-elected lawmakers were women. But those 11 women represent something else, too. Upon their swearing in last month, women now make up 25 percent of legislative seats in the United States — the highest percentage to date.

In Virginia, specifically, the upheaval revoked the previously-held Republican majority, a legislative stronghold in the state. The Washington Post reports that the switch was the largest party flip the state has seen since the Reconstruction era. That most of those seats were flipped by women candidates added to the elections already historic nature.

But, there's even more good news. The female candidates' success also appears to suggest that Democratic are getting down to serious business when it comes to campaigning, meaning even more Democrats could be elected in the 2018 midterms.

While hitting the one-quarter threshold is certainly reason to celebrate, Katie Ziegler, program manager of National Conference of State Legislature's Women's Legislative Network points out on the organization's blog, it took a really long time for women to get this far. The 20 percent mark, she writes, was reached in 1992, the so-called "Year of the Woman." Many are asking whether 2018 might be a re-vamp of the historic victory.

But while many are optimistic, Ziegler also offered some additional sobering facts, namely that in the last ten years, there has been virtually no shift in the number of legislative seats held by women. That means that while it's fine to pat each other on the back in the short-term, it's important not to lose focus on longterm goals, like someday eventually scoring, at least, gender parity.

However, in November's elections, it's entirely possible that you could see the number of women in elected office shift even higher, if election registration numbers are any indication. Reportedly, more than 500 women are running for office in this year's midterms.

NBC News reports that in 2016, 167 women from major parties ran for office, and at the time, it was considered to be a remarkable figure. But, just two years later, women candidates are pitched to outdo that figure more than twice over. EMILY’s List, a group dedicated to helping pro-choice Democratic women get elected to office, reports that fielded inquiries from more than 30,000 women interested in running for office since the 2016 election.

"This isn't a moment. It isn't a wave. It's a sea change," said Stephanie Schriock, president of EMILY's List. "These 30,000 women are the next generation of leaders and candidates - and they will change the face of politics and power in this country forever."

The #MeToo movement demonstrated the power of our collective voice. The women-led opposition to the Republican health care bill showed we will not allow our rights to be ripped away. And the 2017 elections proved, beyond a doubt, that Democratic women can win elections.

Many have pointed to women's disappointment in President Donald Trump as a reason for increased interest in running for office. He has been consistently polling very low among women voters — recently clocking in at a sub-40 percent approval rating, according to Gallup. Researchers behind the same Gallup poll report that having such a low approval rating — and it's below 50 percent for both men and women — is unprecedented. It seems that, especially women, plan on using this dissatisfaction as fuel to mobilize.

As the saying goes, if you're not at the table, then you're on the table. It looks like women plan on pulling up several hundred chairs in 2018.