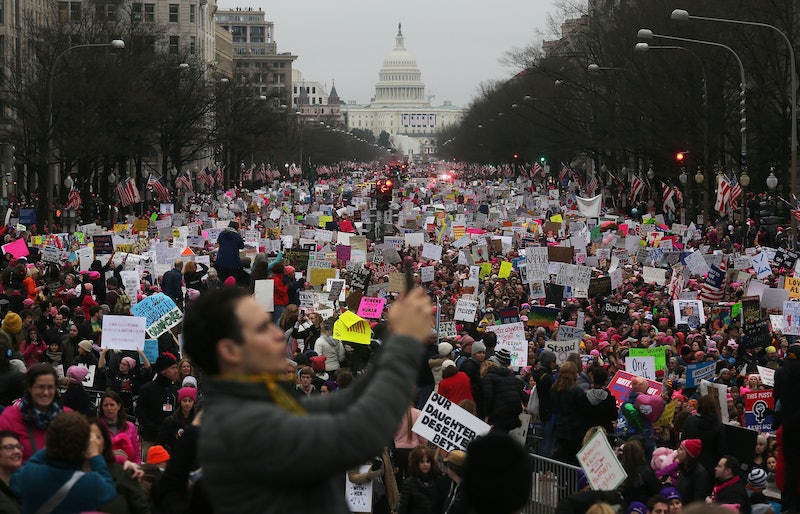 Jan. 21, 2017, was a seminal moment for women around the world, as the first Women's Marches commanded the news and millions of women globally marched for their rights. A year later, the momentum hasn't dissipated; the #MeToo movement and continuing fights against gender discrimination worldwide have only intensified the attention on women's rights and gender inequality. And when it comes to celebrating the anniversary of the first Women's March, hundreds of thousands of women are ready to take to the streets again. So how many Women's March anniversary events will there be in 2018?

This year, the centralized event will be held on Jan. 21 in Las Vegas, Nevada, and is being arranged by activists around the theme Power To The Polls, to empower women to vote, gain political voices, run for office and make their political weight and power heard. Las Vegas is a powerful focal point, as it was the site of America's deadliest mass shooting in history, after a gunman opened fire on Oct. 2, 2017, killed 59 people and injured hundreds. But Nevada is also a key player in the future of American politics in 2018; CNN notes that people in the state voted for Hillary Clinton in 2017, and now has a Republican Senator and Governor, both of whom look vulnerable in their positions. The rally, and its sister events across the U.S., will aim to form women's anger into concrete political action in every state, including a huge voter registration drive to get more women to vote. Around the world, the Women's Marches have the central rallying cry "Look Back, March Forward," in recognition of past fighters for gender equality and in pursuit of new movements forward.

The Power To The Polls map of events, marches, collective action, and meetings surrounding the anniversary of the Women's March numbers over 500 across the U.S., Canada and across the South American continent. Over 400 of these events are U.S.-based, many are marches or preparatory events for marching, and there is at least one event in every U.S. state, including Hawaii — often several events at once. Accurate numbers are difficult as the list contains some duplicates, but the overall impression is a wave of women who'll enter Jan. 21 in droves, fighting for their future, their political power and their voices to be heard. And the range and variety of events is startling: Women in Aspen, for instance, are participating in a community ski lap across Aspen Mountain and then marching across the city.

Worldwide, protests and marches are also gearing up. In 2017, over 670 international Women's Marches grabbed headlines, and in 2018 anniversary marches are planned in London, Athens, Barcelona, Paris, Munich, Lyon and Toulouse, among other locations. Solidarity marches may also, as they did in 2017, erupt after the first wave of events, so this is far from the finalized number.

If you're searching for the closest march to you, Power To The Polls has a zip code search that allows you to find the location of the nearest protest events and their preparations. And if you're under 21, you're invited to the party too. There's also a specific youth-targeted chapter of the Women's March, EMPOWER, created through a collaboration of organizations including Teen Vogue, Rock The Vote and Peace First, that helps activists in high school and college create chapters of Women's Marchers and develop their own tools for political change.

The first Women's Marches represented a huge wave of anger, hope, and power. With over 500 marches and events planned around the world to carry those messages into 2018, with focused intent and big plans to increase women's political power, the Women's March is only just getting started.