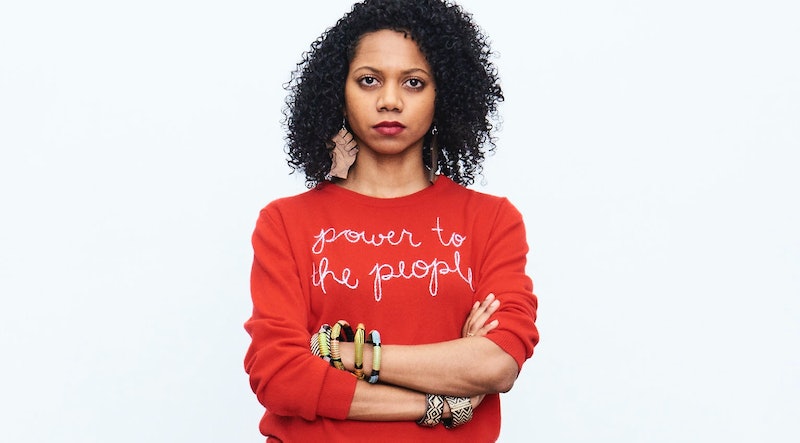 As thousands of students get ready to storm the nation's capital to demand stricter gun laws, there's another group working behind the scenes to make Saturday's March For Our Lives happen. The Women's March organizers, famous for their January rallies steps away from the White House, have been partnering with high schoolers nationwide since a gunman opened fire at Marjory Stoneman Douglas High School in Parkland, Florida, killing 17. The powerhouse coalition is lending its expertise to student activists through weekly calls, in-school trainings, and mentorship from trained "coaches."

"We saw a need to really tend to the voices of young people and to make space for them and we started organizing," Tabitha St. Bernard-Jacobs, 35, Youth Director for Women's March, tells Bustle. She's also a fashion designer whose label, LIVARI, is a women-led brand focused on sustainability and zero waste.

After news of the shooting in Parkland broke, gun violence survivors within the Women's March network and young people involved with the Women's March, known as Ambassadors, called on the extended network to leverage its influence. Calling for gun control is a departure from the pro-feminism, anti-Trump message that drove millions of women to protest in January 2017 and 2018 wearing bright pink "pussy hats" (a dig at Trump's boasts about groping women on the Access Hollywood tape). But now in the wake of Parkland, the Women's March is turning its attention to strengthening the country's gun laws.

"Women's rights isn't just about like, reproductive right or equal pay. Women's rights are rights that affect everybody," St. Bernard-Jacobs says. "These issues that we're talking about like gun violence prevention affect many women all over the country and they have a right to really stand up and say, 'We want safe spaces for ourselves, for our children, for our families,' and as an organization, we stand behind that."

Gun Violence Is Not Just A School Safety Issue

On the Women's March website, organizers state their demand that "Congress pass legislation to keep us safe from gun violence at our schools, on our streets and in our homes and places of worship." The movement, as Empower sees it, is far bigger than school gun violence alone.

"We really wanted to shed light on those types of gun violence as well and bring them into the national conversation that's happening right now," St. Bernard-Jacobs says.

"We have seen Black Lives Matter activists speak out and not be treated the same way that youth are being treated in this moment."

"Some of the feedback that we were getting very early on was that young people have been trying to use their voices in black and brown communities to speak about the gun violence," St. Bernard-Jacobs says. "We have seen Black Lives Matter activists speak out and not be treated the same way that youth are being treated in this moment, and we saw the need very early on to extend to the work of black and brown communities."

How Empower Is Teaching Students To Take The Lead

As the Women's March lends organizational power and media savvy to a growing movement, adult organizers are being careful not to take credit.

"This is a completely youth-led movement," St. Bernard-Jacobs says. "I'm a youth ally and we have a couple other youth allies who are involved, but the Women's March as an organization has been very very sort of generous, really, with any sort of help that the young people need." She says holding weekly calls with ACLU reps and college coordinators, or publishing a toolkit with tips on organizing, helps clear the way for young activists to take the lead on strategy. "We been trying to support them with the more mundane tasks," she says.

The group's youth arm, Empower, started taking shape in November 2016, as the Women's March began to gain steam. Around 300 students from all over the country applied to be Ambassadors to the Women's March in Washington; 31 were chosen. St. Bernard-Jacobs says those young people were quick to join the Parkland students in their fight for gun control.

"Our young people wanted to ... talk about gun violence in a very honest and frank way and to use their voices as students," St. Bernard-Jacobs says. Empower reached out to other young people nationwide who emerged as leaders in the days and weeks after the shooting. While early organizers of protests, rallies, and national walkout movements have told Bustle that they were contacted by representatives from the Women's March, not all of the students in the nationwide movement calling for gun control are working with the group.

Why A Clear Mission (& Message) Is So Important

Yet, Women's March Empower has put forward one of the clearest sets of goals for this geographically and ideologically diverse movement. Where some protests and walkouts around the country have focused on remembering the lives lost on Feb. 14 or counteracting NRA, Empower's goals are pointed: Enact universal background checks and ban assault weapons. President Trump's proposal ultimately didn't back either measure, and there isn't enough support in Congress to bring either to a vote.

"We don't believe in arming teachers."

"We believe these things are possible," St. Bernard-Jacobs says against all odds. "This is a platform that we came up with that is really representative of what is needed at this moment. We don't believe in arming teachers," she says, regarding President Trump's proposal to solve the crisis, "and we also don't think that more cops in schools is the answer. We need more counselors in schools. We need more support in schools."

Getting In There To Teach Students To Get Out There

That call for inclusivity and intersectionality is central for Martin Urbach, a music teacher at Harvest Collegiate High School in Manhattan. He also facilitates the youth activism and Black Lives Matter after-school clubs, and led students on a March 14 walkout. More than half of the school's 400 member-plus student body walked out on the one-month anniversary of the Parkland shooting. Urbach says St. Bernard-Jacobs visited his school that morning.

"She's a big, big part of what we're able to do," Urbach says. "She spoke to the students a little bit about organizing. ... She also linked us up with people from Rock the Vote and different press and so we are building a strong foundation on which to keep this youth activism movement at Harvest and continue it."

"My part in this was facilitating a space where the youth can be organized about organizing."

Through collaboration with the Women's March, Urbach says his students "understand that they're part of a larger movement" of young people who have been calling for gun control for years — specifically, youth in black and brown communities. He says his students are "unpacking the way media and society reacts and responds to youth of color when they are calling to end gun violence than they do for white youth."

Like St. Bernard-Jacobs, Urbach makes sure to highlight that it's the students who are behind this wave of activism. Urbach is also quick to downplay his involvement in the March 24 walkout that was attended by half of his school's student body: He says he only got a room, markers, and snacks. "My part in this was facilitating a space where the youth can be organized about organizing," he says.