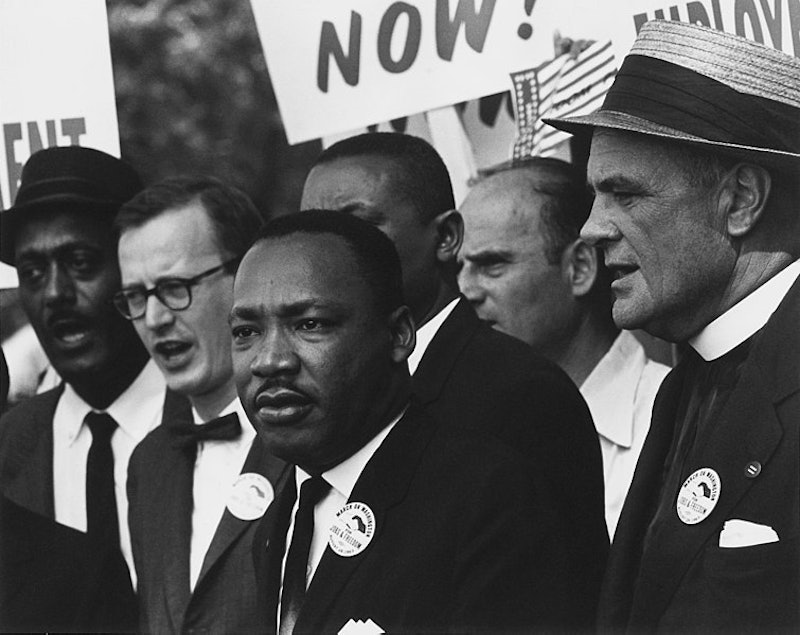 On Martin Luther King Jr. Day, it's easy to share noncontroversial quotes from the Reverend about how we should all get along, but King's genius is shown in his lifelong willingness to confront hard truths. For King, Christianity was a catalyst that made him speak out against racial inequality and social injustice, not an excuse to shy away from it — something that made him stand out in the 1960s, and would likely make him stand out in today's political climate. I'm a lifelong Christian, but I often get discouraged when I look at today's evangelical church. King's faith-driven activism reminds me that it's possible to actually make the world a better place instead of using faith as an oppressive tool. The discouragement I currently feel is something King knew well, and it's a reason his activism is so important.

Consider this excerpt from the famous "Letter from a Birmingham Jail": "In the midst of blatant injustices," King writes, "I have watched white churchmen stand on the sideline and mouth pious irrelevancies and sanctimonious trivialities. In the midst of a mighty struggle to rid our nation of racial and economic injustice, I have heard many ministers say: 'Those are social issues, with which the gospel has no real concern.' And I have watched many churches commit themselves to a completely other worldly religion which makes a strange, un-Biblical distinction between body and soul, between the sacred and the secular."

King's frustration with the white evangelical church feels familiar. More than 50 years later, I still find myself wondering why churches are so slow to speak out about the systemic racism we still see today. On Jan. 5, a prominent evangelical leader asked Christians to pray that President Trump wouldn't face impeachment. On Jan. 7, a Tennessee pastor reportedly told his congregation he'd been involved in a "sexual incident" after being accused of sexual assault by a woman — and received a standing ovation. And of course, there's that statistic that never gets old: 81 percent of white, born-again evangelicals voted for Donald Trump in the 2016 presidential election.

We've come a long way since King penned that letter, but we have a long way to go. When I see prominent church leaders defending people who call Black Lives Matter "Black identity extremists," I wonder whether we've learned anything from King's yearslong social justice campaign — or his violent death by a white sniper. After white nationalists hosted a rally that turned deadly in Chartlottesville, Virginia, last summer, some people wondered whether white pastors would finally address racism among their ranks — an issue King talked about nearly 60 years ago.

And though I'm often disappointed in the church, my faith has remained strong, mainly because I've made a conscious decision to familiarize myself with the works of Christian leaders like King. When I see people unafraid to speak out about the ways Christians can do better, I find it both comforting and convicting. It reminds me that I'm not alone. An excerpt from Advice for Living, an advice column King wrote in 1958, reads:

I know of no way to separate God from the noble work that the NAACP is doing. Religion at its best is a two-way road. On the one hand it seeks to change the soul of the individual so that he can be one with himself and with God. On the other hand it seeks to change environmental conditions so that the soul can have a chance once it is changed. Therefore any religion that professes to be concerned about the souls of men and is not concerned about economic conditions that cripple them and the social conditions that damn them is a dry as dust religion in need of new blood.

Given King's clear frustration with the way the church handled racism over 50 years ago, I sometimes wonder what made him stay. I think I ponder that because I often ask the same question of myself — why would anyone associate with any belief system that allows harmful behavior to continue? Why do I?

King often referenced Scripture in his writing. "I Have A Dream" quotes Amos 5:24: “But let justice roll on like a river, righteousness like a never-failing stream!” His activism, along with that of Malcom X., helped inspire Black liberation theology, a theological movement that emphasizes God's heart for the oppressed and poor. I look at King's clear respect and reverence for the Jesus of the Bible, and I'm reminded why I've stuck with Christianity even when it's broken my heart. Our religious text provides a clear directive to seek equality, take care of the poor and welcome refugees and foreigners. It's fair to say that King's Christianity isn't seen in a lot of churches today, but it's also fair to say that Jesus's Christianity isn't there, either.