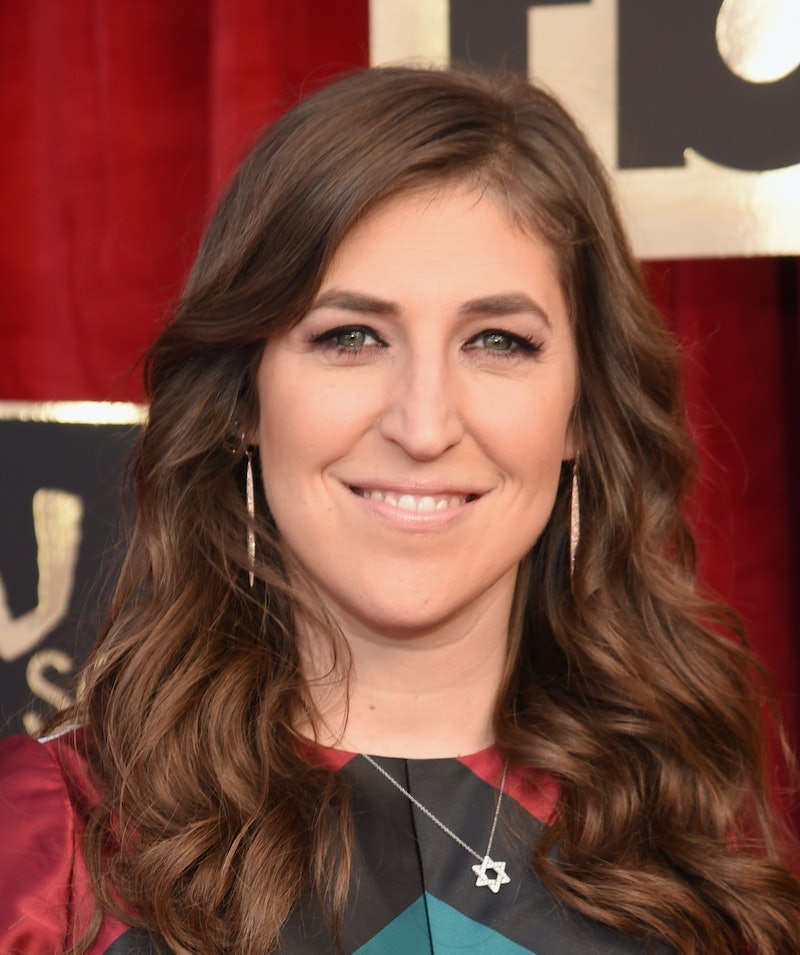 Even in the modern Hollywood landscape, where it's de rigueur for celebrities to also be authors, activists, and lifestyle gurus, Mayim Bialik's offscreen resume stands out from the rest of the red carpet crowd. Yes, she's best known for her Emmy-nominated turn as Amy Farrah Fowler on The Big Bang Theory, one of the most popular shows of the past decade. But before then, Bialik was a feminist teen icon in the 1990s, challenging long-held stereotypes of girls on television with her role on Blossom. And the feminist teen grew up into a feminist adult (and, incidentally, one with a doctorate in neuroscience from University of California, Los Angeles). This year alone, Bialik wrote Girling Up: How to Be Strong, Smart and Spectacular, and made a viral video on why it's important to not refer to grown women as "girls."

Bialik is also a Zionist, and she is not afraid to talk about what it does and doesn't mean to identify as one. Her willingness to jump into the fray of recent debates in which many prominent women, including Women's March organizer Linda Sarsour, suggested that Zionism is not compatible with modern-day feminism, may be what truly makes her an anomaly in 2017.

On March 15, Bialik wrote "Feminism & Zionism: Definitions And Exclusions," for her website, GrokNation, after observing more people arguing that the the two identities were mutually exclusive.

There's not a planet that exists that should make me choose between being a feminist and being a Zionist.

While some people vary in how they define Zionism, and while there are different types of Zionists, the base-level definition Bialik used in her post for GrokNation is: "the belief in the right of the Jewish people to have an autonomous state in Israel." Bialik proceeded to declare:

Bialik reiterated this point when speaking with Bustle about her article. "There’s not a planet that exists that should make me choose between being a feminist and being a Zionist," she says. Yet many feminists (myself included) are worried we're being forced to make that choice.

Bialik's post came hot on the heels of a growing debate over whether women who identified as Zionist could have a place in the modern feminist movement. Days before Bialik's post, The Nation's Collier Meyerson interviewed Sarsour about this very issue.

In full disclosure, it was in response to a piece I had written for The New York Times about how the International Women's Strike had some prominent elements which potentially alienated Zionist feminists like myself. Namely, its platform called for the "decolonization of Palestine" without any affirmation of Israel's right to exist and without censure of any country other than Israel and the United States. There was also the fact that one of the original organizers for the event was Rasmea Odeh, a woman who was convicted for her role in a 1969 bombing that killed two Israeli college students. (Odeh has testified she was tortured into her confession. An independent International Red Cross observer verified her trial was fair and Cornell Law professor William A. Jacobson noted Odeh's timeline about the torture details did not match the timing of her confession nor the evidence of bomb-making materials found in her bedroom. Last week, Odeh agreed to a plea deal to leave the United States after being found guilty of lying about her terrorism conviction on her entrance forms.)

During her interview with Meyerson, Sarsour said, "It just doesn’t make any sense for someone to say, 'Is there room for people who support the state of Israel and do not criticize it in the movement?' There can’t be in feminism." She also said, "You can't be a feminist in the United States and stand up for the rights of the American woman and then say that you don’t want to stand up for the rights of Palestinian women in Palestine."

However, what Sarsour — and many others who argue Zionism and feminism are incompatible — fails to realize is that being a Zionist does not mean an unwillingness to support Palestinians, nor an unwillingness to criticize Israel. Bialik makes this very point during our interview.

"I do not believe [Israel] is a perfect country. I do not support all the policies of its government. I don't support any military actions that are taken against civilians that are unnecessary, racist, or anything like that," she says. "But there are a lot of ways to be a Zionist, and one of them is by also supporting the rights of Palestinians, while not wanting to sacrifice the security of Israel. Those things are compatible."

Nor should being a Zionist be incompatible with the other causes that Bialik supports. In addition to being an outspoken feminist and a Zionist, a quick glance at her Twitter feed reveals she is an ardent critic of Donald Trump, especially when it comes to both of his executive orders targeting Muslim-majority countries.

At the SAG Awards in January, when asked about her red carpet outfit, Bialik used the attention to pivot toward what she saw as a more important issue: Trump's travel ban. She told Women's Wear Daily, "We don't all have to agree on politics, but the fact is I'm not just an actor, but I'm a mom and I'm the grandchild of refugees and I'm child of civil rights activists."

The fact that Bialik is willing to declare she'll register as a Muslim if Trump ever makes good on his registry threat — or that she threw her support behind the Women's March and the International Women's Strike — isn't good enough to prove she is sufficiently feminist or liberal to some critics. As a number of people have argued, including AlterNet's Max Blumenthal, being a Zionist nullifies other progressive credentials.

"For many of us who are liberals who also believe in the right of the state of Israel to exist, this feels like the far left is tearing liberals apart," Bialik says. "It's terrible. I think it's devastating because there are so many — in particular, so many Jews — who are trying to be part of progressive and liberal politics. It's horrible that this is being used against us."

I think the misinformation about the state of Israel is one of the biggest problems.

While not without its own controversy and backlash by any means, identifying as a feminist when you live and work in a fairly liberal, progressive environment carries relatively little stigma or risk. However, identifying as a Zionist does because support, even measured and critical support for Israel, is often quickly painted as support for an "oppressor" or "colonizer."

"I’m going to be honest," Bialik says when asked why she wrote her GrokNation piece, "the two women I asked, with all due respect, didn't want to do it." She explains they were afraid to go public for fear of backlash. "There were people who didn’t want to touch this because of exactly what I am experiencing."

Since publishing her piece on Zionism and feminism, Bialik says she has been dealing with "a lot of blatant anti-Semitism." She says some commentators have written remarks, such as "'You Jews are making this up.' 'You Jews haven’t been oppressed.' 'You Jews need to stop doing this. You control the media.' A lot of insanity like that." Because of her post, she recently had to ask her social media manager to ban the word "Zio-Nazi" from her page.

We need to build something better than using Israel as the whipping post for the left.

These comments don't surprise Bialik because she is already well-versed in how deeply pervasive misconceptions about Zionism are. "When I came out as a person who believes in the state of Israel, people literally thought Zionists are killers," she says. "People were like, 'She wouldn't be a Nazi.' Literally, young people on the internet were coming to my defense, saying 'Mayim Bialik would never be a Zionist. She's such a nice person.' The word has become equated with something so horrendous."

Bialik finds the comments disturbing for what they reveal about people's perceptions of Israel and Zionism. "For me, it is incredibly upsetting to see Israel lumped into that category [with Nazism]," Bialik says. "I think the misinformation about the state of Israel is one of the biggest problems. We're losing a PR war in terms of the facts about what Israel is and what it’s not, and what Zionism is."

And as a self-identifying "bleeding-heart liberal," Bialik is disappointed that there are efforts from the left to force out people because they support Israel (even if they also support Palestinian statehood).

"The notion of excluding people from liberal politics, whether it’s feminist politics or other kinds of liberal politics, simply because they are Jews or Zionists, nothing good comes from that," Bialik says. "I believe in Zionism and I believe in the rights of Palestinian people — men, women, and children. We need to build something better than using Israel as the whipping post for the left."