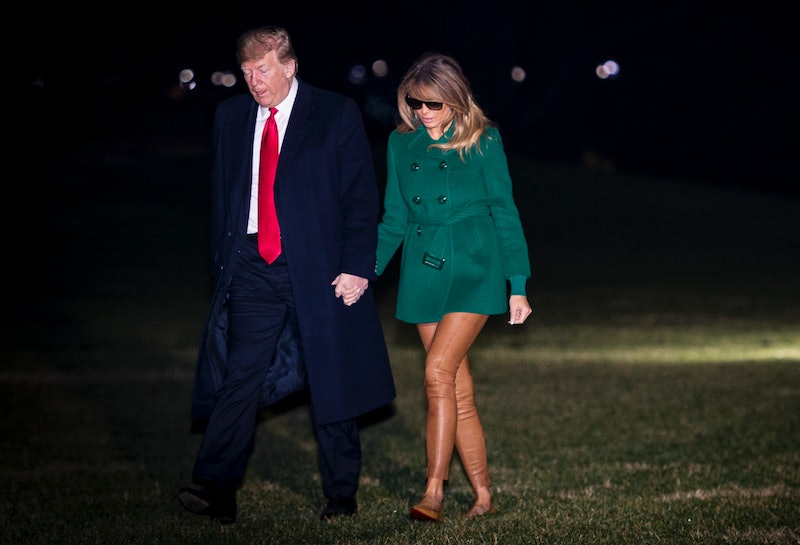 POTUS has been his regular active self on social media straight through the holidays, so anyone with a Twitter account probably knows that he spent this time at the White House. But for anyone wondering how Melania Trump spent New Year's 2019, you might be surprised to know that it was spent with the majority of the Trump family, at their usual haunting grounds: Mar-a-Lago Resort in Palm Beach. Per CNN, Melania took over the position of host for the annual New Year's bash in her husband's absence — and it's safe to say her evening was markedly different than her husband's.

Though Melania's celebration was described by CNN as a more relaxed event than what was done in recent years at Mar-a-Lago, Donald was tweeting from the Oval Office as the world rang in the new year. As Donald Jr. and his girlfriend, Kimberly Guilfoyle, celebrated alongside Melania in Palm Beach, the president wrote tweets like this one: "I’m in the Oval Office. Democrats, come back from vacation now and give us the votes necessary for Border Security, including the Wall."

Per CNN, Trump told reporters on Jan. 2, "I was here on Christmas evening, I was all by myself in the White House, it's a big, big house except for all those guys out on the lawn with machine guns. Nicest machine guns. I was waving to them."

Melania did spend Christmas with the president, though. CNN reports that she and Barron returned to the White House on Christmas Eve and were there through Dec. 27, before returning to Palm Beach.

According to People, a number of notable celebrities, politicians, and influencers attended the New Years Eve festivities at Mar-a-Lago alongside Melania. Some guests included Australian billionaire Anthony Pratt and Paolo Zampolli, the United Nations ambassador for the Commonwealth of Dominica.

A spokesperson for Melania confirmed to People that there was nothing spontaneous about the New Years Eve arrangements between Melania and POTUS. At least, not on FLOTUS' side. The spokesperson said, “It was always her plan to spend the winter holiday at Mar-a-Lago with [Barron]."

As different as their actual holiday celebrations were, their holiday messages to the American people drew an even starker contrast. On Twitter on Jan. 1, Trump wrote:

HAPPY NEW YEAR TO EVERYONE, INCLUDING THE HATERS AND THE FAKE NEWS MEDIA! 2019 WILL BE A FANTASTIC YEAR FOR THOSE NOT SUFFERING FROM TRUMP DERANGEMENT SYNDROME. JUST CALM DOWN AND ENJOY THE RIDE, GREAT THINGS ARE HAPPENING FOR OUR COUNTRY!

In comparison, Melania pulled a surprising social media move and posted a selfie of herself and what many believe to be the head of Barron, who rarely graces her or Trump's social media accounts. Melania's Instagram read, "Wishing everyone a Happy, Healthy, Peaceful and Prosperous New Year! ✨"

Three days into 2019, and Melania and POTUS are back together at the White House, though the government is still in partial shutdown mode. Trump has not given word on when a compromise might be reached regarding border wall funding.