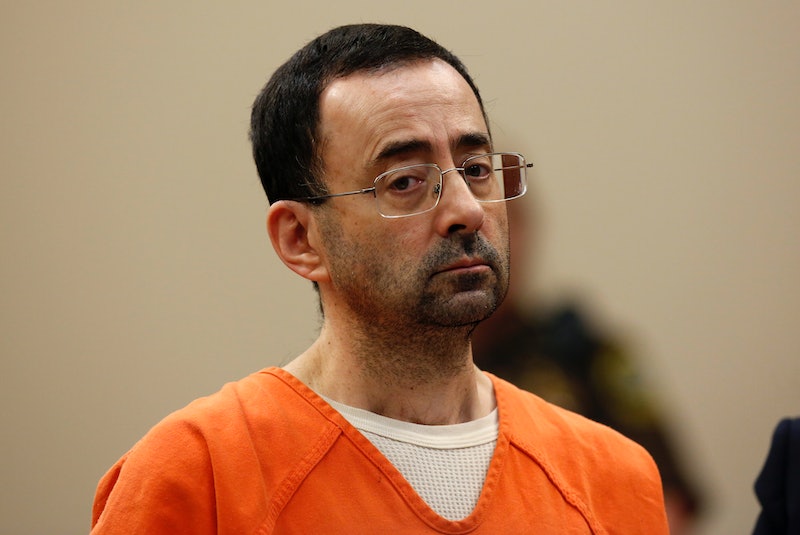 Even in the months before Larry Nassar pleaded guilty to molesting girls, critics were calling for an investigation into how USA Gymnastics allegedly mishandled the investigation into the former Team USA gymnastics doctor. But it's becoming increasingly clear that Nassar's other employer, Michigan State University, botched its Title IX investigation — which critics say ultimately enabled the abuse.

Title IX investigations into sexual assault allegations are often controversial. According to Alan Sash, a New York lawyer specializing in Title IX, that's because most schools simply aren't capable of investigating or adjudicating such cases. "No matter what kind of training they get, investigators are not trained law enforcement professionals," Sash says. "Some are biased and some have an agenda."

Sash says that Title IX investigators typically are attorneys, and many work only part-time as investigators while holding other jobs at the university itself. "If the goal is to find out the truth, why have any potential conflict of interest or appearance of conflict of interest?" he asks. In its 2014 Title IX investigation of Nassar, MSU relied on three medical experts, one of whom was a close friend of Nassar's, according to Inside Higher Ed.

As investigators aren't trained in collecting evidence the way a police officer would be, Title IX investigations are often flawed — ultimately leading to flawed outcomes.

Although Nassar's crimes only came to light in recent years, the allegations against him go back at least two decades. In 2014, both the Michigan State Police Department and Michigan State University's Title IX office investigated Nassar after a student athlete claimed he had behaved inappropriately. The school ultimately cleared him of any wrongdoing, concluding the doctor's accusers didn't understand the "nuanced difference" between the medical procedure he purportedly conducted and sexual assault.

"Do you really want the botany professor deciding the issue of intent? This isn't a jury of peers and they don't necessarily have legal training."

Despite mounting allegations, MSU didn't fire Nassar until 2016, at which point a series of articles about alleged sexual assault and abuse in USA Gymnastics had already begun to appear in The Indianapolis Star.

The adjudication of Title IX investigations can be as flawed as the investigations themselves. Those who hear the case typically apply for the role. Like the investigators, Sash says the people who adjudicate a Title IX case also may be composed of part-time university employees, and therefore have a bias. "Do you really want the botany professor deciding the issue of intent?" says Sash. "This isn't a jury of peers, and they don't necessarily have legal training."

In lawsuits naming both the university and USA Gymnastics as defendants, more than 100 of Nassar's alleged victims claim Michigan State looked the other way and allowed Nassar's assault to continue unabated — and the number of victims to accumulate.

So, the timing of Nassar's firing raises a couple of questions: Why did MSU wait so long — and did school administrators cover for the doctor?

The case has echoes of another university athletic sexual assault scandal: that of former Penn State assistant football coach Jerry Sandusky. Larry Nassar has three times as many alleged victims as Sandusky, who in 2012 was convicted of sexually assaulting 10 boys over 15 years. The charges against Sandusky — and the claims that the university had covered up the abuse for years — ultimately tarnished the legacy of veteran football coach Joe Paterno and led to massive sanctions against the school's football program, as well as jail time for the school's former president and two other administrators.

The Larry Nassar scandal potentially could have more severe consequences for Michigan State than the Sandusky scandal did for Penn State. And yet MSU has not faced the same kind of punishment, or even drawn the same level of public outrage, as Penn State, despite the fact that Nassar now has pleaded guilty to at least some of the charges (he also pleaded guilty to child pornography charges).

People who generate revenue get a lot of passes.

Lawyers for some of Nassar's alleged victims have said the university heard complaints about the doctor as early as 1997. MSU has denied receiving any allegations prior to 2014, according to Inside Higher Ed.

The 2014 Title IX investigation that the school conducted has been mired in controversy. The university faces allegations that it cleared Nassar of wrongdoing by relying on the backing of other school employees, including some of the doctor's close colleagues. In March, NBC News quoted a former student who said that Michigan State discouraged students from talking to reporters about the case.

One of the biggest conflicts when it comes to Title IX investigations, particularly when the investigations concern a school's athletic department, is revenue. "The dodgeball team probably isn't going to get a pass on stuff," Sash says. "But people who generate revenue get a lot of passes, because other people love the money they're bringing in." In 2016, MSU saw its athletic revenue hit $108.7 million — and while the engine behind most of that growth is football, the school's gymnastics program is also used as a recruitment tool.

A June op-ed in MSU's college paper, The State News, asks why heads haven't yet rolled at the school the way they did at Penn State:

It is hard to comprehend that the MSU Athletic Department had no knowledge that Dr. Nassar was fired last September by the USA Gymnastics, the sport's national governing body, or the reasons for the dismissal. Why has the MSU Board of Trustees not dismissed President Lou Anna K. Simon?

In order to determine whether there's been a cover up, the writer of that op-ed, MSU doctoral alumnus Salvatore Castronovo, suggested "a complete investigation and cleansing are required."

MSU has launched an internal review of its handling of the Nassar controversy, although the school isn't planning on releasing the findings of that investigation. Instead, it plans to send the results to its Board of Trustees, which will then start an "action-oriented review," according to the university. Whether that will result in any house-cleaning remains to be seen.

More like this
The 2023 Super Bowl Commercials Feature A 'Breaking Bad' Reunion & Missy Elliott
By Alyssa Lapid
11 Super Bowl Instagram Captions To Use On Game Day — Even If You Don’t Like Sports
By Alexis Morillo
All The Ways You Can Watch The Super Bowl In The UK
By Asyia Iftikhar and Darshita Goyal
Twitter Is Shook As Tom Brady Holds Back Tears Announcing His 2nd Retirement
By Marina Watts
Get Even More From Bustle — Sign Up For The Newsletter
From hair trends to relationship advice, our daily newsletter has everything you need to sound like a person who’s on TikTok, even if you aren’t.