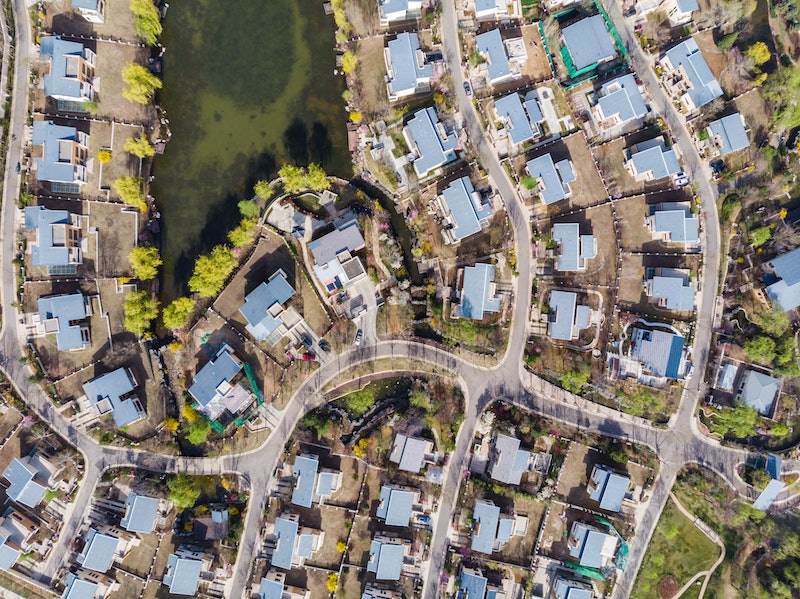 In the wake of protests against the death of George Floyd, many people who belong to their neighborhood's Facebook group came to realize that some of the people that they engage with online — from offering business recommendations to participating in lost dog searches — can be pretty racist. As community members turned to their Facebook groups to share information about protests, comment sections were set ablaze with discourse that gave moderators a tough decision: censor their neighbors, or allow racist language to represent their town.

"We have to essentially make it up as we go along using our best judgement and common sense, and go back to the mission of this group — to be a safe haven and to share information for any or all folks interested in our town and the surrounding community," the moderator of one southern Massachusetts group tells Bustle.

On June 5, Facebook published a guide for navigating community pages discussing race and social issues, suggesting that moderators create clear guidelines for what topics are permitted in the group, and encouraging moderators to make sure diverse voices are supported and protected. But while the majority of Americans support the Black Lives Matter movement now compared to 2014, Kevin Roose, technology columnist for The New York Times, told The Daily on June 22 that the current predominant opinion on Facebook is "overwhelmingly posts that oppose Black Lives Matter." Roose goes on to explain that the movement is being "undermined" by high-engagement posts that call the movement itself racist. (Bustle reached out to Facebook for comment on these claims, and we'll update this post when the company responds.)

Community moderators are now facing this kind of offensive content daily, as the moderator of the southern Massachusetts group, who asked to remain anonymous to protect the integrity of their small town, knows well. A post asking for recommendations of local Black-owned small businesses to support turned into a community-wide argument when another group member suggested broadening the list to "all small businesses." The moderator had to make the call about whether to allow the "all lives matter" type response, which is now generally understood as rooted in racism, conscious or not.

Though the moderator considered eliminating all political posts for the sake of avoiding conflict, they decided that "civility would be the rule and would be enforced." Unfortunately, this dictum has not led to the progressive discussions they were hoping for. Leading up to local Black Lives Matter rallies in the town, the moderators decided that even though people in the community might not consider the phrase "all lives matter" racist, it would be prohibited from the boards on those grounds. While most community members supported the decision, a few commented that they felt censored.

"It would be easier and cleaner to ban all discussion and controversy, but rhetorically is that still a community page?" the moderator says. "Silencing certain voices just increases the tension and stubbornness."

In a Chicago neighborhood, moderators in a mothers-only community group are having better luck turning animosity into support. "As a moms group founded by two Black women, we felt that it was critical that we took a stance for our lives and the lives of our family members," Shanya Gill-Gray, one of the moderators, tells Bustle. In a large, predominantly white community where, according to Gill-Gray, many public service employees and police officers live, race has been part of the conversation for years. "When everything started happening, we were clear to let everyone know that we would not be tolerating any incidents of hate in the group and if people did not agree, they can choose to leave the group."

Since George Floyd's death, according to the Gill-Gray, over 100 people have left the group, a mix of elective exits and bans. To ensure that newcomers understand the stance of the group, the moderators added a question about what it means to be anti-racist in the request to join forum.

"We pride ourselves on this, being a safe space for diverse moms of all backgrounds where they can feel welcomed," she says. "Tense" conversations have occurred, she says, but many have gently evolved into positive dialogues. "We have had conversations about education, community involvement to activism and raising anti-racist kids," the moderation explains. One white mother in the group is now leading a book club on how to raise anti-racist kids.

"We have chosen to not only take an anti-racist stance but to also find ways to bring our community together to celebrate diversity," she says. "It’s not easy but it’s worth it."

More like this
TikTok's "Damp" Lifestyle Is All About Mindful Drinking
By Carolyn Steber
It’s About Time Black Girls’s Voices Were Heard – & 'Girlhood Unfiltered' Is The Start
By Paula Akpan
The Best Lat Exercises With Dumbbells, According To Trainers
By Carolyn Steber
The 8 Best Pilates Exercises For Lower Back Pain
By Carolyn Steber
Get Even More From Bustle — Sign Up For The Newsletter