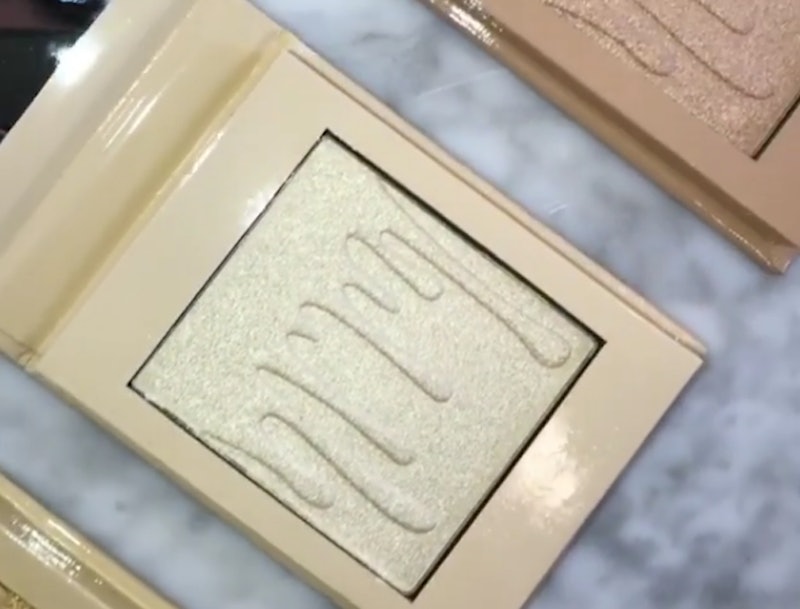 If you thought last year was good, just wait until you see what this brand has in store for 2017. According to social media, Kylie Cosmetics created Kylighters for their second new product of the year. Considering fans have been waiting a while for this moment, this is a pretty big deal. How much are Kylie Cosmetics' Kylighters, you ask? Well, we don't have all the details just yet, but the brand has announced a bunch of information. Here's everything that the brand has announced so far.

This launch is a little bit different than most. While Kylie Jenner is known for her sneak peeks and hints of upcoming products, this time she's telling it all. Well, except for one minor detail — the price. Right off the bat, Jenner showed the packaging, shades, and even swatches of the six cheek shines. She announced their names too — Banana Split, French Vanilla, Salted Caramel, Cotton Candy Cream, Strawberry Shortcake, and Chocolate Cherry.

The brand also announced on their Instagram that the Kylie Cosmetics Kylighters will be available Feb. 28 at 6 p.m. ET. The only thing that they forgot to mention was the price. There's no word on what the price tag will read, but Bustle reached out to Kylie Cosmetics for comment.

It's hard to speculate how much they will cost, since this is the first time the brand has created the product. Because they all come in their own case with a mirror, I'm willing to bet it will be pretty pricey though. If I had to guess, I'd say that it's somewhere in the $30 range, based on the prices of the brands other products.

This isn't the only upcoming launch from the brand either. On Feb. 24, kylie Cosmetics is adding Apricot and Head Over Heels into their permanent collection as well. Basically, there's a lot of new makeup to snag in the upcoming week.

Let's be honest for a second. No matter what price point Kylie Cosmetics marks on their Kylighters, there will be people that are will to buy. There's just something about the Jenner-inspired makeup phenomena that makes people want to give her all their money. Judging from the swatches, this time will be no different.