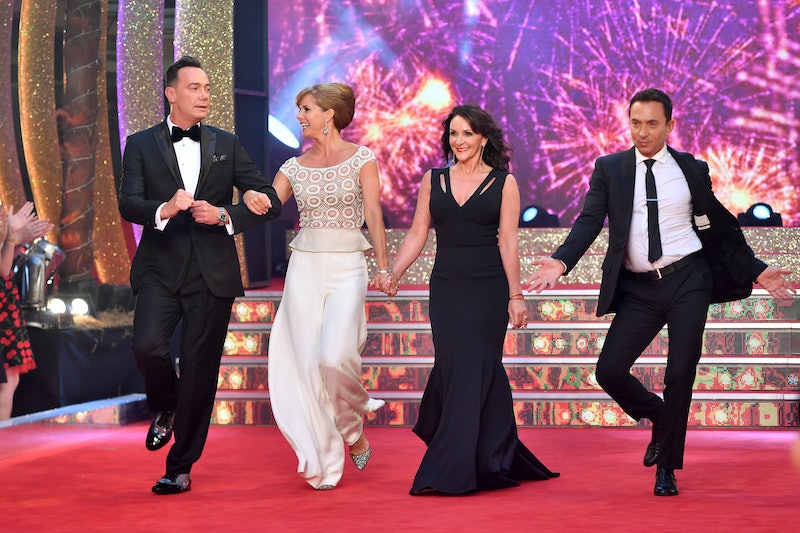 Only a few more days before the rest of the year gets real camp, real quick. On Sept. 8, sequins and sassiness will accompany a panel of former pros judging a bunch of celebrities on the premiere of the latest season of Strictly Come Dancing. The trophy's fancy, the outfits are dazzling, and the judging panel will always bring their A game. And now with this season's celebrity lineup — including the series' first-ever YouTube star — complete, you'll get to see a new selection of unwitting celebs snarked on and adored over by the good cop/bad cop panel. They all have the expertise and the attitude, but how much are the Strictly Come Dancing judges paid for the job?

While Len Goodman's departure from the panel in 2016 is still being felt, the returning judges — Shirley Ballas, Craig Revel Horwood, Bruno Tonioli, and Darcey Bussell — have enough drama between them to at least keep things interesting. Earlier this year, Ballas and Horwood were the subject of headlines involving a gender pay gap at the series. Upon learning that the former head judge Len Goodman earned £70,000 more than her with his £250,000 salary, Ballas demanded for her pay to be matched. When it was revealed that only a third of female presenters made the BBC's list of its top 96 earners, Ballas was granted a significant raise.

Even still, a war of words continued between the judges. "Yes, I think women should be paid the same as men," Horwood told The Sun in July, "but what would you say to a woman coming in after you’ve been in the job for 15 years when they’ve done absolutely nothing to earn it? I don’t think that’s right."

Ballas and Horwood, however, aren't the only stars who have spoken out about compensation on the franchise. Mel C has reportedly turned Strictly down multiple times, because, as she told the Daily Star back in Oct. 2016, "the money’s s***!" But are the rest of the judges satisfied? They definitely don't seem to be complaining. Horwood and Tonioli have each had a huge pay raise since their reported £17,000 starting salary. Having served 14 years as judges on the show, they've since seen their salaries skyrocket past the £100,000 prize given to the winner. According to a source close to The Sun, they now earn an estimate of £110,000 a year. That's quite a lot more than the contestants, but still a small fraction of presenter Claudia Winkelman's reported salary, which lies somewhere between £450,000 and £499,000, according to Metro.

This was all revealed in last year's annual report for the BBC. For the first time in its history, the broadcaster had to disclose the earnings of anyone who was paid more than £150,000 a year. Hopefully in the years to come, when it comes to the gender pay gap, Strictly will learn to have as much balance as its dancers.