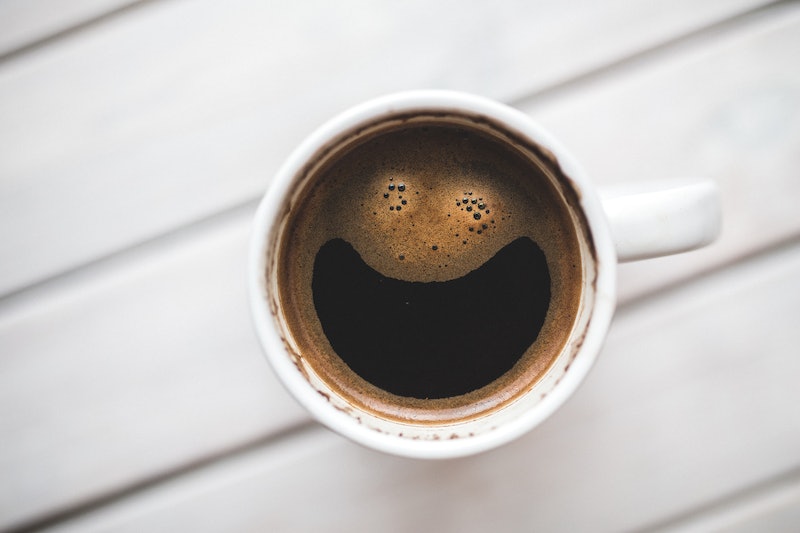 Craving a third coffee of the day, but worried that your caffeine intake might be verging on a little too high? There's no longer any need to tough out those drowsy afternoon hours, as new research reveals you can drink 400 mg of caffeine a day — the upper limit recommended by the FDA — and be totally fine! To reach that quantity of caffeine, a person would have to consume approximately four cups of brewed coffee, two 16-ounce cold brews, or, for those who prefer soft drinks, 11 cans of soda — meaning a healthy adult can now feel free to sip on that latte morning, afternoon, and night! I'm going to give die-hard coffee lovers a moment to celebrate (and refill their well-used mugs) real quick.

Caffeine, the naturally occurring stimulant found in things like coffee beans, tea leaves, cocoa beans, guarana, and kola nuts, is an extremely popular psychoactive drug (yes, it's a drug) with approximately 90 percent of Americans ingesting at least one caffeine-containing substance daily. One study estimates that on average, Americans consume 165 mg of caffeine a day, while another has the number pinned at a significantly steeper 300 mg. As someone who regularly drinks three cups of joe a day, and will gamely finish dinner with a shot of espresso, between 250 and 350 mg is about what I need to get through my day and perform at my best. I grew up watching Gilmore Girls, so I see nothing wrong with my consumption, and now science will finally back my up.

Between 2001 and 2015, thousands of studies examined the possible short and long-term side effects of caffeine consumption. For the review, researchers from the International Life Sciences Institute analyzed 740 studies which looked at adverse side effects of moderate caffeine consumption (up to 400 mg) from a variety of sources, including "coffee, tea, chocolate, cola-type beverages, energy drinks, supplements, medicines, energy shots, caffeinated chewing gum, caffeinated sport gel, and caffeinated sport bars."

The review, published in the journal Food and Chemical Toxicology, found after extensive analysis of the data that "the evidence generally supports that consumption of up to 400 mg caffeine/day in healthy adults is generally not associated with adverse cardiovascular effects, behavioral effects, reproductive effects, acute effects, or bone status." While common advice notes that pregnant women should cut caffeine entirely out of their diets or switch to decaf — which, for many devoted coffee drinkers, is a nightmare — there was yet more good news. "Evidence also supports that a daily consumption of up to 300 mg caffeine/day in healthy pregnant women is generally not associated with adverse reproductive and developmental effects," the study's authors wrote, meaning those coffee shop fans hoping to start a family can down two cups a day without a side of fear.

Sadly, these new findings don't boil down to there being no such thing as too much coffee. Only you know how your body reacts to caffeine and whether an extra cup will turn you into a jittery mess or make you feel like a rockstar. Consuming too much coffee can lead to headaches, stomachaches, irritability, and insomnia, so while 400 mg of caffeine won't hurt you in the longterm, it's important to know how your body will react before taking your caffeine consumption to the limit. Drink wisely!