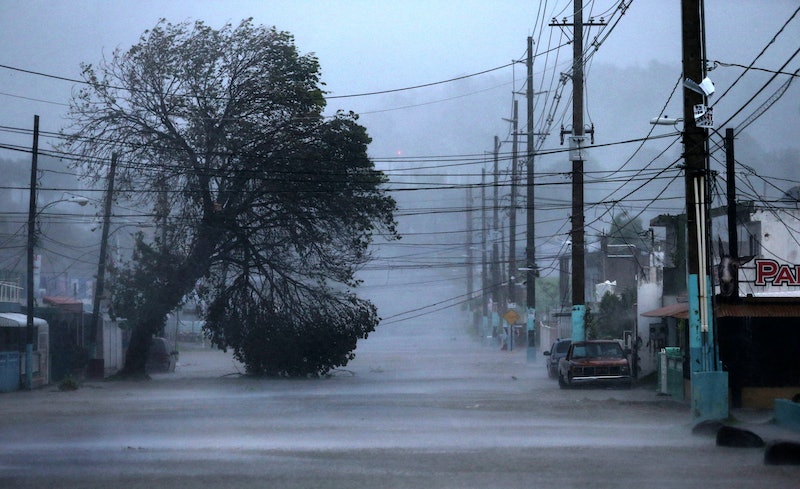 On Wednesday, several Caribbean islands were pummeled by Hurricane Irma, including Puerto Rico, which experienced significant damage. Widespread power outages, lack of drinking water, and destroyed buildings have been reported on the island since the storm made landfall.

According to CNN's Leyla Santiago, Irma's winds had caused 900,000 people in the capital city of San Juan to lose power. The Associated Press reported that nearly 50,000 people had no water and that power at 14 of the island's hospitals had gone down, leaving them with no choice but to use generators. Both tourists and residents have found themselves stranded in Puerto Rico, with at least 1,000 having taken refuge in shelters, according to officials.

The National Hurricane Center said Irma is the most powerful storm the island has seen since Hurricane San Felipe in 1928. Nearly 3,000 people were killed in Puerto Rico and Florida by Felipe.

The Puerto Rico Electric Power Authority estimates that the storm is strong enough to leave parts of the island without power for four to six months. When asked if he felt this projection was realistic Gov. Ricardo Rossello said that, due to weak energy infrastructure, "anything above a Category 3 hurricane hitting Puerto Rico would be devastating towards that infrastructure."

Juan Tosado, a state maintenance worker, told ABC News that Hurricane Hugo — a storm that killed dozens and left 28,000 homeless — left him without power for three months in 1989. "I expect the same from this storm," he said. "It's going to be bad."

Abigail Acevedo, a Puerto Rican resident who survived Hugo, told The New York Times that Irma is the worse of the two. “This is phenomenal,” Acevedo said. “There is nothing like this.”

The storm has also caused devastation in other Caribbean islands. Prime Minister of Antigua and Barbuda Gaston Browne said on Wednesday that Irma had destroyed over 90 percent of the island's buildings and left Barbuda "literally a rubble." The French region of Saint Martin was said to be "95 percent destroyed" by a top local official.

On Wednesday, President Trump declared a state of emergency in Puerto Rico, as well as in the U.S. Virgin islands and Florida. "Just spoke w/ Governors Rick Scott of Florida, Kenneth Mapp of the U.S. Virgin Islands & Ricardo Rosselló of Puerto Rico," he tweeted. "WE ARE W/ YOU ALL!"

Irma is expected to hit the Dominican Republic, Cuba, Haiti, the U.S. Virgin Islands, the Bahamas, and the southern region of Florida in the upcoming days.