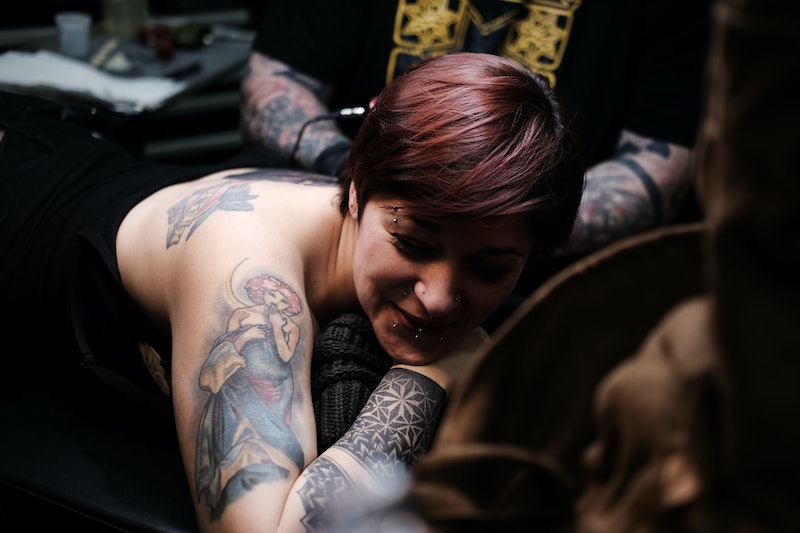 Something about that tattoo design is calling to you — but you're not sure how painful it's going to be in the tattoo studio, and how much pain you can actually stand. Wondering how much a tattoo really hurts is very common, and while I can't tell you that it won't be pain-free, there are some ways to make it, if not less painful, then at least a little less intense. Preparing for the pain of a tattoo session involves planning and forward thinking, and a couple of conversations with your chosen tattoo artist about how to make your time with them as comfortable as possible.

First, be aware of the fact that there are multiple factors that influence the pain of a tattoo, and your reaction will likely shift during the tattooing session depending on what's being done and where it's being placed. I have a tattoo on my foot, and can testify to the fact that the initial inking isn't necessarily the most painful element of a tattoo session; it's often more intense during shading, highlighting and deepening, where tattoo artists use many small strokes and go back over areas that have just been inked.

Placement also matters. The tops and bottoms of feet are one of the most painful areas for tattooing because of their lack of padding and many nerve endings; other areas that can incur a lot of pain, according to tattoo artists, are the ribs, the sternum, and the head. In my case, my foot tattoo was more uncomfortable than painful in the moment — although the tattoo gun's tendency to make the bones in my feet vibrate was thoroughly disconcerting.

Don't think that placement will necessarily save you from pain, though. Tattoo experts at Inked note that the inner arm and chest, which are relatively popular places for ink, can be very painful — but there's no area of the body which is completely pain-free for a tattoo, thanks to the nature of the tattooing process. Modern tattoo guns push ink into the skin as many as 150 times per second, and the ink for a permanent tattoo has to be lodged into the lower layer of skin known as the dermis, where your pain receptors live.

Sadly, there's no universal measure for pain when it comes to tattooing because of the individual nature of pain and nerve sensitivity. The sensations of being tattooed, explains Healthline, can include scratching as the tattoo gun shades areas with small strokes, sharp intense pain during repeated applications of the tattoo gun, and "dullness," in which you feel general rather than distinct pain after being tattooed for a while. How you react personally, however, depends heavily on your nerves, the placement of the piece, and the design; tattoos which require a lot of shading and repeated detail will always hurt more than quick pieces without detailing.

If you're concerned about pain while getting your tattoo, it's crucial to have a conversation with your tattoo artist early on. If they're skilled, they can suggest placements where you may experience less pain, and modify the design so that it's less complicated and will require less time under the needle.

There are also tips and tricks to practice during the session that can help. Inked suggests taking judicious breaks during the session if you're experiencing a lot of pain: "Take these brief periods of time to eat something and collect yourself before going back under the needle. We recommend a small snack like orange juice and a chocolate power bar. However, make sure you aren’t taking too many breaks or breaks for too long. The piece will begin to swell a lot more during your breaks and constant starting and stopping will interrupt a lot of the tattoo process and adrenaline build up." Eat properly beforehand, too, as being hungry will not help your discomfort, and bring along a friend to support you and hold your hand through the session.

Tattooist Nick Baxter wrote on his website that meditation during the session may also help you deal with the pain. "The simplest way to reach this relaxed state is to focus all thought upon one’s breathing, literally one single breath at a time, if needed. The brief pauses in the tattoo process, when the tattooer is dipping into his ink caps or cleaning her needle tips, provide frequent opportunities for taking a deep breath, releasing tension, and resetting one’s mental focus." An app such as Calm on your phone that helps guide meditation sessions may be helpful here.

Tattoo artists themselves are divided on whether using numbing creams and tattoo-oriented anesthetics actually help. The experts at Modern Body Art note that when the topical anesthetics wear off, the session can become very difficult. "They tend to work for a relatively short period, usually less than an hour, and once they have worn off people seem to really struggle," they explain. "Whether this is physiological or psychological is unclear but we have seen it time and time again."

However, tattoo commentators at Tatring believe it can be effective for multiple-stage tattoos: "Sometimes a bit of numbing cream could be the difference between finishing your tattoo and having to come back again for a second or third session. If you know your tattoo will go over a particularly sensitive area such as the elbow, you could just use the numbing cream for that particular area only." Whatever your choice, always discuss it with your tattoo artist first, preferably during your consultation, and apply the numbing cream according to directions.

Afterwards, painkillers are a pretty good idea to deal with the ache, but there are some definite no-gos. "It is important not to use aspirin as it will stop the clotting process and make you bleed more. This is a nightmare for tattooing," explain the tattooists at Modern Body Art. "The same thing goes for alcohol, and this includes drinking the night before." Do not turn up for a tattoo drunk or hungover; tattoo artists will likely refuse to complete the tattoo until you're completely sober.

Ultimately, all tattoos are going to hurt. With a bit of planning, you can have a more comfortable session — but know that you'll likely grit your teeth and gasp for breath at least once in the process of getting your beautiful body art.