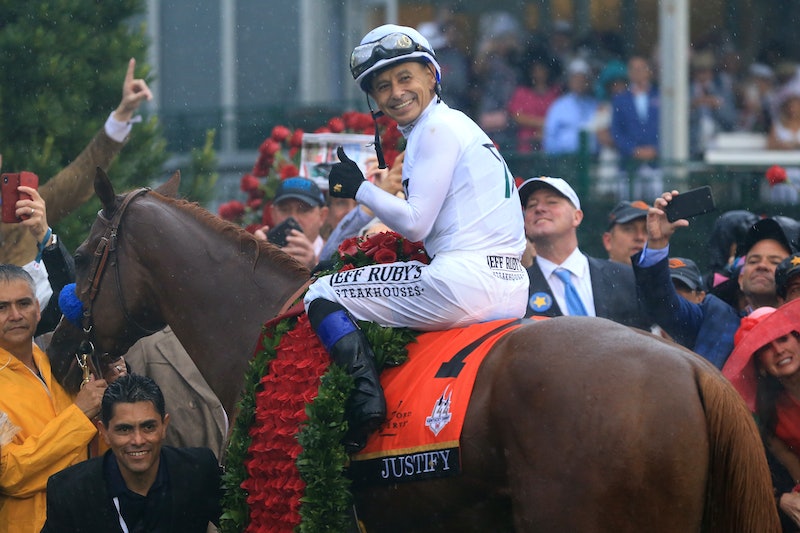 While bragging rights may be enough for some victors, a little moolah certainly never hurts — and the 2019 Kentucky Derby winners split a prize purse of considerable size. In fact, for the winners at least, the 145th running of the Kentucky Derby is set to be the most lucrative run in the race's history. Churchill Downs recently boosted the annual race's purse size by $1 million.

In January, Churchill Downs announced that it had raised the purse for the Kentucky Derby to a guaranteed $3 million thanks to early returns from the historical racing machines at its Derby City Gaming facility in Louisville, Kentucky. "Our recent investment into historical racing machines is paying immediate dividends to Kentucky horsemen," Churchill Downs Racetrack President Kevin Flanery said in a statement, adding that it was "extremely gratifying" to be able to substantially raise the purse for not only the Kentucky Derby but a series of other races in the racetrack's program as well.

"Our steady growth in available prize money is truly exciting for the Kentucky horse racing and breeding industry," Flanery said in the statement.

But the Kentucky Derby isn't a winner-take-all race, meaning the first-place finisher isn't given the entire $3 million purse. Instead, it's split between the race's top five finishers. According to Churchill Downs, the winner of the Kentucky Derby will take home $1.86 million along with the coveted gold trophy and blanket of roses. The remainder of the purse is then divided amongst the remaining finishers with the runner-up receiving $600,000, the third-place finisher $300,000, fourth place $150,000 and fifth $90,000.

What's more, the purse set to be awarded at the 2019 Kentucky Derby has certainly come a long way from what was won at the first running of the Kentucky Derby in 1875. According to the race's official website, Aristides, the first horse to ever win the Kentucky Derby, powered his way across the finish line ahead of the pack to win a purse worth just $2,850.

Still, it's likely that winning the Kentucky Derby is about a lot more than winning the purse. Because entering the race is far from free — according to CNN, hopefuls must pay $25,000 to enter with an additional $25,000 fee paid to start, not to mention the money spent on training and prep — the big payout of racing in the Kentucky Derby isn't money, it's prestige.

Twenty horses will line up at the starting gate at Churchill Downs on May 4 for their own chance at glory.