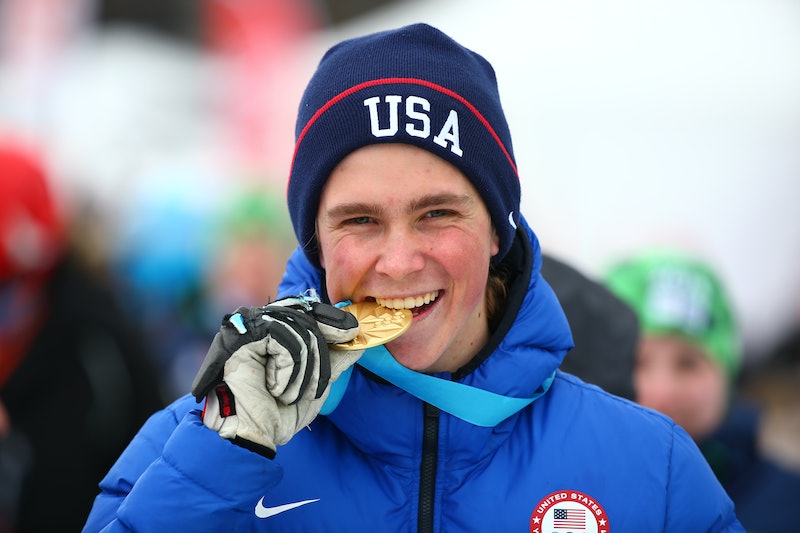 Years of intense dedication. Countless hours of back-breaking, physical work. Training that separates you from loved ones for weeks at a time. If you ask an athlete how much an Olympic gold medal is worth in 2018, they might have a lot of meaningful answers for you. If you're talking about money, though, it's a whole different ball game.

It might be kind of a letdown, but gold medals aren't entirely made out of gold. The PyeongChang medals will be weighing in at 586 grams — making them the largest medals ever given out at an Olympics — and the current price of that in gold would be absurd. Specifically, each gold medal could cost upwards of $21,000 — but only if it were entirely made of gold.

Instead, the PyeongChang medals will (like all of the other Olympic gold medals since 1912) be made mostly out of silver and then plated with gold. The gold coating each PyeongChang medal will amount to 6 grams total, and the scrap-metal price of that with the silver would total out to over $500. In other words, if you melted a gold metal down into its constituent metals and then sold them like that, that's approximately the amount you would get.

The thing about gold medals, though, is that they're not just scrap metal — they're a reward for a lifetime of hard work and dedication, and they're forever tied to the athletes who won them. If you brought a gold medal to an auction, you'd get a whole lot for, say, one of Jesse Owens' hugely symbolic gold medals from the 1936 Berlin Olympics — where Owens, the black grandchild of a former slave, won in front of Hitler at the Games that Hitler had wanted to use to prove the dominance of the Aryan race.

You would get less, most likely, for say, Georgian Vladimer Khinchegashvili's gold medal in freestyle wrestling from Rio in 2016.

In other words, Owens' medal would probably be worth multiple times the amount of money most people ever see in their lifetimes — whereas Khinchegashvili's medal probably means far more to him on his mantle than it would if he put it up on Ebay.

A typical gold medal can generally get between $10,000 and $50,000 at an auction house. But one of those Jesse Owens medals once sold for about $1.5 million. For a particularly famous modern Olympian like Michael Phelps, a single gold could be expected to fetch about $100,000 at an auction — not that he needs it, though, with all of the endorsement deals that his gold medals also brought him.

And while of course Olympians don't buy their way into the Games, they do have to shell out serious money in order to get the chance to compete — or, in many cases, their parents do. National teams in the U.S. and elsewhere fund training for their athletes, but only once the athletes have qualified. That means that before they hit it big with the sponsorships, their parents might be paying something in the neighborhood of $5,000 to $10,000 a year for training, depending on the sport. And with all of that training time, kids who have their sight set on the gold could also miss out on a lot of education, and therefore a lot of opportunities to make money in the future.

That's a cynical way to look at it, though. More than anything else, a gold medal is a symbol and celebration of the dedication that went into the victory, and it's not about the money. Athletes have sold their medals for various reasons, long after the big moment on the podium — and you can be certain that the potential auction price of the medal isn't on any athlete's mind as she's accepting her gold and then hearing her anthem playing behind her.