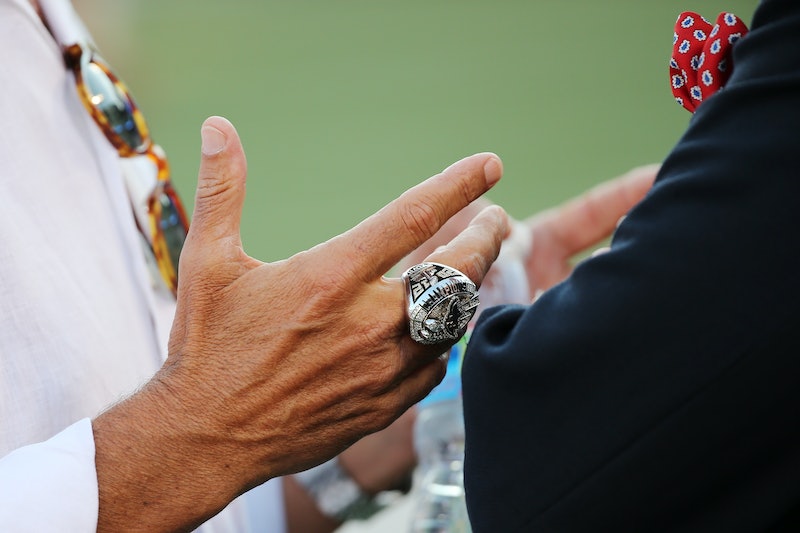 The New England Patriots and the Philadelphia Eagles faced off in the Super Bowl 13 years ago, and they'll have a rematch when Super Bowl LII kicks off in Minneapolis on Sunday. As always, every member of the winning team will take home a highly-coveted ring to commemorate their victory, and if you're a diehard fan of the game — or a jewelry collector — you may be wondering how much a Super Bowl ring is worth in 2018.

It's impossible to say exactly how much the 2018 Super Bowl rings will cost, namely because they haven't been produced yet. Super Bowl rings are custom-made for the team that wins, but the bidding process for ring manufacturers doesn't even begin until after the game itself, according to CNBC.

According to a 2009 football encyclopedia, the NFL itself pays the first $5,000 of the cost of each Super Bowl ring in any given year; there are 150 rings produced every year, according to CNBC, which means that league is ponying up $750,000 every year on Super Bowl rings. But that's just the beginning. Some team owners want even pricier rings for their team, and they have the option of getting them — but they have to foot the bill for the extra cost.

How much extra might an owner pay for a ring? That, too, is unclear, because the NFL doesn't announce the final production cost of the rings, even after they've been made.

Complicating matters further is the fact that, as with any rare good, the true value of a Super Bowl is solely in the eye of the beholder — that is, the buyer. A Super Bowl ring is worth whatever the highest bidder is willing to pay for it, and that number varies wildly depending on the circumstances. A ring given to a team's MVP, for instance, will likely go for a lot more than one worn by a kicker who played no significant role in the Super Bowl. Similarly, a ring might fetch a higher price if it was won by a team that rarely wins Super Bowls, or if it's simply more aesthetic pleasing than other Super Bowl rings.

Having said that, players have sold their Super Bowl rings in public auctions in the past, so some ballpark figures are available. The most expensive Super Bowl ring was the one that New York Giants linebacker Lawrence Taylor won in Super Bowl XXV, which is worth a whopping $230,000, according to KIRO 7. Taylor is generally regarded as one of the best defensive players in NFL history, and the Giants won that game by a single point, so it makes sense that Taylor's ring would go for such a high price.

Most Super Bowl rings are worth much less than that, of course, but make no mistake: They're still very, very expensive. In general, the rings that have been publicly valued  — or, as is sometimes the case, sold on eBay — are worth between $40,000 and $65,000, according to data from CNBC and KIRO.

It's worth noting that although 150 Super Bowl rings are produced every year, there are only 53 players on an NFL team's roster. The extra rings go to the team's staff and owners — and in some cases, a team will produce even more rings to give to former players. In those instances, the owner foots the bill for the extra rings.

If the Patriots win on Sunday, team owner Robert Kraft get his fifth Super Bowl ring — and yet he'll only have four in his possession. According to Kraft, Russian President Vladimir Putin stole his Super Bowl XXXIX ring in 2005 when he was visiting Russia, which is reportedly worth $25,000. Kraft later issued a statement saying it was a "gift" to Putin.

More like this
Twitter Is Freaking Out Over Rihanna’s 2023 Super Bowl Halftime Show Announcement
By Stephanie Topacio Long
TV Schedules Undergo Major Changes For The Queen's Funeral
By Sam Ramsden
'Survivor' Host Jeff Probst's Salary Per Season After 22 Years Is The Real Winner
By Hugh McIntyre
What Is Miles Teller’s Net Worth? The 'SNL' Host's Bank Account Is No Joke
By Meg Walters
Get Even More From Bustle — Sign Up For The Newsletter