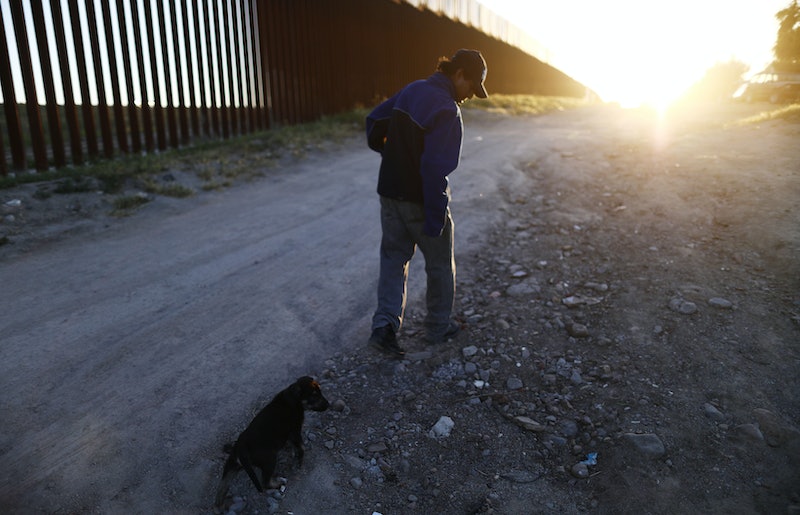 In a testimony before the Senate Defense Appropriations subcommittee, Defense Secretary Pat Shanahan told lawmakers that President Donald Trump's administration is making progress on its proposed border wall. In fact, Shanahan said that the Pentagon expects over 200 miles of the border wall to be built in the near future, Politico reported Wednesday. But how much of Trump's border wall has been built so far?

In December 2018, NBC reported there are 650 miles of fencing along the border, but most of it was there before Trump took office. According to a CNN report from January, no new barriers had been built along the Southern border since Trump took office, though some outdated fencing was replaced with modern alternatives. The Trump administration, however, expects that will change soon. On Wednesday, Shanahan told Senate Defense Appropriations Subcommittee Chairman Richard Shelby that enough money has been placed on contract — from Homeland Security border funding, diverted Pentagon money, and Treasury forfeiture funds — for the Trump administration to build 256 miles of barriers along the Southern border.

“How you will see this materialize in the next six months is that about 63 additional new miles of wall will come online,” Shanahan said. “So about a half a mile a day will be produced.”

According to a proposal issued this week by U.S. Customs and Border Protection (CBP), the agency wants to "replace up to approximately 63 miles of pedestrian fencing and vehicle barrier with new bollard wall" in two Arizona counties. CBP is seeking public comment on its proposal, Newsweek reported, but the 63 additional miles are only the beginning of what's to come. According to Politico, the Pentagon’s fiscal budget for 2020 requests $7.2 billion specifically for the border. This money would be divided evenly between military construction projects and barrier construction, Politico reported.

The Trump administration's funding sources for the border wall have been a contentious subject for months. At the end of March, the Department of Defense announced that it was taking $1 billion from a military personnel account to build a 57-mile fence along the border, NPR reported. Then, just last month, the Pentagon awarded two contracts — totaling almost $1 billion — to construct barriers along the border, per Politico.

Trump has gone to extreme lengths to obtain funding for his border wall, which was one of the primary elements of his 2016 presidential campaign. Earlier this year, the president initially refused to end a partial government shutdown unless Congress granted him the funding he sought for his border wall. After 35 days, however, Trump finally agreed to end the shutdown — but just a few weeks later, he declared a national emergency at the border so he could access billions of dollars in funding, The New York Times reported.

Trump's decision to declare a national emergency quickly prompted criticism from Democrats, per The New York Times, though they have tried to work with the president to improve other types of infrastructure. According to USA Today, Senate Minority Leader Chuck Schumer and House Speaker Nancy Pelosi reportedly agreed to a $2 trillion spending deal on infrastructure last month — though border wall funding appeared to be absent from their deal. In a live interview with The Washington Post this week, Pelosi made it clear that the border wall would not be part of infrastructure negotiations.

Funding for the border wall is not the only defense policy attracting widespread controversy. According to Politico, Shanahan told lawmakers on Wednesday that there are currently 4,364 National Guard and active-duty troops on the border, though he insisted that these deployments will not have a negative impact on military readiness.