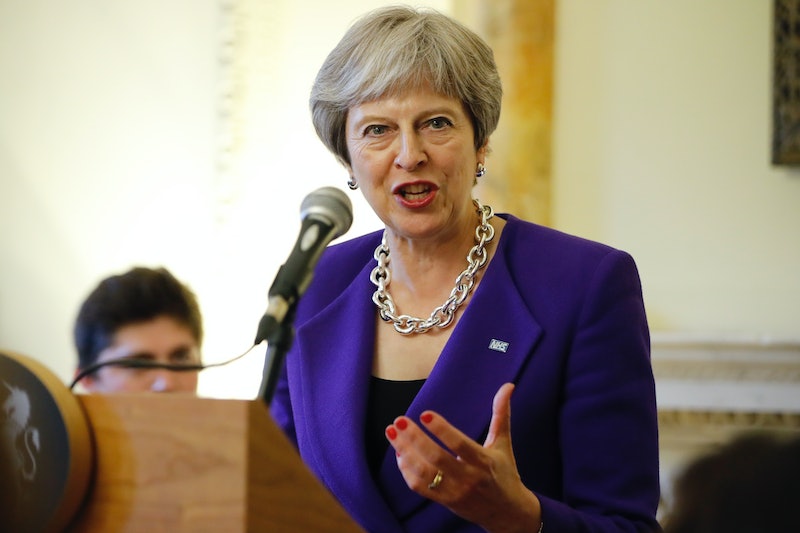 President Trump is scheduled to meet with the British prime minister this week, and it's a gathering that will be watched closely from both sides of the pond. Although the British prime minister and the U.S. president are both heads of their respective governments, the parliamentary style of governance is different from the presidential system in the United States. How much power Prime Minister Theresa May has differs from the amount of power that Trump enjoys, though they are each very important political figures, both domestically and internationally.

On Thursday, President Trump is slated to land in London for a much-anticipated visit to the United Kingdom. During his trip, he is scheduled to meet with a number of UK dignitaries, including May and Queen Elizabeth II.

While May leads the UK government, she wasn't elected to the position by the general UK voting population. Instead, in the UK, voters elect representatives to the lower house in the legislature, the House of Commons. Those representatives are called "members of parliament," or MPs, for short. If one party holds a clear majority in the House of Commons, that party's leadership is generally chosen to be the prime minister. If there is no clear majority, coalitions will sometimes be formed among various parties, who may unite to select the new leader.

Whoever is chosen is then technically appointed by the monarch, though the monarch may not personally select whomever he or she prefers. The process of appointment is a constitutional requirement, as the monarch is still technically the head of state, though they are expected to abstain from partisan politics. Their job, primarily, is to preserve a strong, unified United Kingdom, not to make political decisions.

Unlike the U.S. president, the prime minister can be removed from her position at virtually any time. All that is required is what is called a "vote of no confidence." These are motioned for by other members of parliament. Per the UK parliamentary website, the government is then given two weeks to reorganize itself, should the motion pass. If MP's are unable to come to consensus, the government is then dissolved and a general election must take place.

Unlike President Trump or members of Congress, there is no guaranteed term length once a prime minister is appointed. This necessarily means that May has less latitude to govern unilaterally than Trump and his GOP majority, because the system requires that she serves at the pleasure of her colleagues, and by extension, their constituents. The British Prime Minister must maintain a positive morale within the legislature, or else she could face an ousting.

This is not to say that May is politically toothless, by any means. She still acts as the face of the United Kingdom, and participates in summits with other world leaders. She also is required to meet with the Queen from time to time. Although she is not technically the head of state, the way that Trump is in the United States, she functions as the political backbone for her country.

Unlike in the United States, where there is a codified separation of power, in the UK, those powers are consolidated. Whereas the administrative branch is its own wing of the government, May is actually a member of the legislature, meaning that the two divisions operate as one. It's not that the British government has less power than the government in the United States, it's that it's simply distributed in different ways.

As for how May and Trump's meeting will go, that's a much more challenging outcome to predict. The two have historically been lukewarm with one another, and their relationship has undergone several serious peaks and valleys. Both will be expected to represent their country and their constituents' interests, eyes from around the globe will be watching.