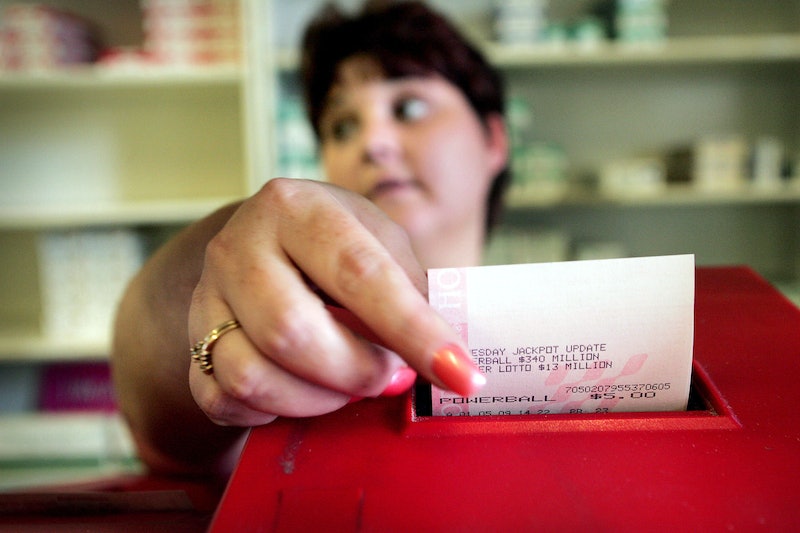 While one lucky winner bought the over $700 million Powerball jackpot ticket in Massachusetts, there's already another possible beneficiary: public schools. Lotteries including Powerball claim ticket sales go to fund education and other government-run services, such as veterans' health, elderly care, and state parks.

Once considered a source of corruption, government-sponsored lotteries became more publicly acceptable in the 1960s as a moneymaking solution to state fiscal problems. About 29 percent of the Powerball money goes to education, while another 16 percent funnels into state general funds and "other."

State-run lotteries operate in 44 states, plus Washington D.C., Puerto Rico, and the U.S. Virgin Islands. At $2 a pop, more than 100 million Powerball tickets have been sold for the current jackpot, according to Texas Lotto Report. Overall, roughly half of all lottery ticket revenue goes to the winner themselves. States keep the rest of the profit and decide how to spend it after paying for operational expenses, according to the the Multi-State Lottery Association, the organization that runs Powerball. These expenses can range from advertising to employee salaries. In a state-by-state breakdown, the vast majority of lottery revenue in all but five states goes to the lottery winners and administrative costs, not to state programs.

Powerball is not without its critics. In one episode of Last Week Tonight, host John Oliver criticized what he considers a state-run gambling operation sold as charitable foundations for public schools.

Powerball ticket revenue doesn't always go where politicians claim it's going either. Some of the lottery money that's intended for education tends to be diverted to the state's general revenue pool after a few years, said political science professor Patrick Pierce to CNN Money.

Pierce, who co-authored the study "Lotteries for Education: Windfall or Hoax?", found that while education spending jumps in the first year after a state adopts a lottery system, the pace of education spending tends to slow down after that. By the eighth or ninth year, education spending ends up lower than it would have been if the lotto had not been adopted. One example is North Carolina, which started the North Carolina Education Lottery in 2005. The state claimed 100 percent of the proceeds would pour into the state's public education budget. By 2009, the state cuts its education funding by 12 percent and now North Carolina divvies up a smaller cut of its budget to education than it did when the lottery started.

That's because lottery earnings tend to replace rather then supplement money that would have otherwise gone to education. Lottery money is also meant to make up the difference in tax cuts that politicians promised their voters. But in cases like in Oklahoma, tax cuts can cost more than what lottery revenue brings in.

In 2014 Americans spent $70 billion on lottery tickets, which is more than what Americans in all 50 states spent on sports tickets, books, video games, movie tickets, and recorded music sales. Whether Americans are benefiting from Powerball and other lotteries is questionable.