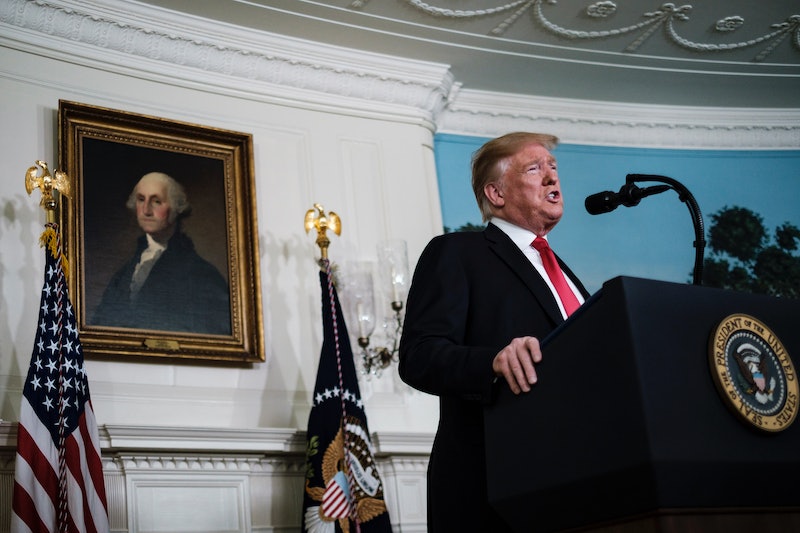 Although the government has finally reopened, the repercussions of its five-week closure are continuing to ripple through the country. In a new report released by the Congressional Budget Office on Monday, the agency estimated how much the government shutdown cost. CBO's analysis shows that around $11 billion was lost, $3 billion of which will never be made back.

Part of the irony, of course, is that the shutdown funding battle was over $5.7 billion for a border wall. The $11 billion lost is roughly twice that. According to the report, $18 billion in federal workers' wages was delayed while the government was closed. The Trump administration has announced that these employees will receive back pay; but federal contractors won't get the money they would have made during the shutdown.

CBO says that the shutdown's cost to the economy came mostly from work that was not done by furloughed workers, federal dollars that stopped flowing to goods and services, and some consumers' reduced ability to make purchases (800,000 workers weren't getting paid). "CBO's estimates do not incorporate other, more indirect negative effects of the shutdown," the report notes. "For example, some businesses could not obtain federal permits and certifications, and others faced reduced access to loans ... Such factors were probably beginning to lead firms to postpone investment and hiring decisions."

CBO points out that some businesses in the private sector will never get back the money that consumers declined to spend because of the shutdown. The federal government has also permanently lost some funds it would have acquired in fines and fees, the report says, such as the money some people would have spent on visits to national parks that had to be canceled. The government usually makes $500 million from such fees in a given year.

Additional billions have been lost because the shutdown forced the Internal Revenue Service (IRS) to temporarily reduce its taxpayer oversight. Normally the agency conducts activities to guard against tax evasion (though many analysts have argued that the IRS doesn't yet investigate fraud thoroughly enough because Congress hasn't given it enough resources). After a temporary reduction in those oversight activities, the CBO report "estimates that tax revenues will be roughly $2 billion lower in fiscal year 2019 because of the shutdown."

It's not just a lapse in oversight that the IRS is dealing with. CBS reports that the IRS was unable to open 5 million pieces of mail while the government was closed and that it may take the agency a year or more to catch up. Tax returns could be delayed as it also struggles to return to business as usual, according to The New York Times (luckily, there are steps you can take to help ensure that you get your return on time).

Of course, the costs of closing the government will spike still further if Congress and the president are unable to come to a budget agreement within the next three weeks and another shutdown results. The continuing resolution that opened the government only lasts until Feb. 15, and President Donald Trump said on Friday that he is willing to shut down the government again over money for a border wall.