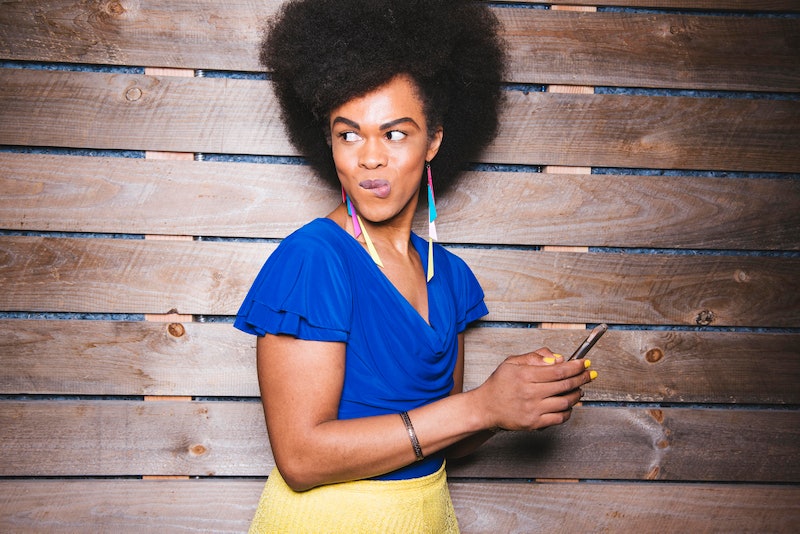 It's far too easy to waste time at work. You start reading the news or checking your personal email, and the next thing you know you're down a distraction hole looking at the Instagram of your kindergarten boyfriend. We all know it happens, but you're probably wasting more time than you realized. Because NetQuote, the free online quote provider, surveyed 1,004 Americans about just how dedicated they were to their work in the office. The answer? Really, really not dedicated.

Seriously. It turns out that over 40 percent of people took selfies at work and more than one in 10 had gotten into a full-blown Facebook argument while working. But perhaps the most interesting statistics were about how frequently people were using their dating apps. It turns out we're spending so many hours swiping and chatting during office hours that it adds up to days over the course of a year. Dating apps Tinder, Bumble, and Hinge came in as the most popular at-work offenders, but other ones played a role too.

"I was most surprised at the amount of time people are spending on dating apps," a member of the creative team for NetQuote tells Bustle. "Not just a few minutes here or there during a slow period at work, but actual DAYS worth of work time spent swiping."

But how do we end up spending so much time on dating apps? It may be that we don't even realize it's happening. "I think it’s an easy distraction to get sucked into," NetQuote's rep says. "You start doing it and suddenly 15 minutes has passed. It’s also easy to have it look like you are checking an email during a meeting, but in reality you’re messaging your latest Bumble match. Plus in many instances you’d be on the apps on your personal phone, so there’s no chance of having your boss see your usage history." Hopefully — yikes.

So exactly how much time are we spending wasting time at work? Here's what the survey found.

More like this
Are Gemini & Scorpio Compatible In A Relationship?
By Kristine Fellizar
The Most Compatible Life Path Numbers, According To Numerologists
By Kristine Fellizar
15 Flirty "Thinking Of You" Texts That’ll Make Your Crush’s Day
By Lexi Inks
Help! My Partner Only Wants Sex Late At Night & Won’t Compromise
By Sophia Benoit
Get Even More From Bustle — Sign Up For The Newsletter