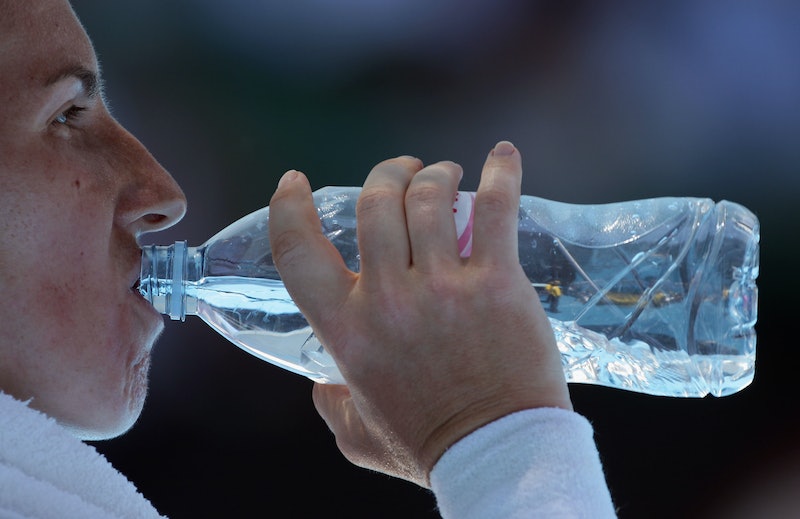 Water is one of the most important parts of maintaining one's health (or just, like, maintaining life in general, honestly). Staying hydrated is necessary in order to feel energized, flush out waste, and get nutrients to flow throughout your body — amongst other things. You've undoubtably heard the "rule" that says everyone should be drinking at least eight glasses of water a day; one of the most common pieces of advice taken from health articles, friends, movies, nutritionists, and even doctors. But this popular rule of thumb might not be as accurate as you think. New research shows how much water you should really drink a day — and you might be surprised by the results.

This isn't the first time a study has challenged the "eight glasses a day" rule. In 2015, according to The New York Times, researchers said it wasn't necessary. Then, according to ScienceDaily, a study in 2016 found that a lot of people were drinking too much water based on this rule. And even back in 2002, according to Physiology, a study proved that there was no scientific evidence behind the idea that eight glasses of water a day was some sort of magic number for our health. It's not really clear exactly where the idea came from, but it more than likely came about as a general way to encourage people to be aware of how much water they're drinking.

So, if eight glasses a day isn't necessary, then what is? Sorry to anyone who likes to follow strict guidelines, but researchers have found that there actually isn't a hard and fast amount everyone should be adhering to. Like so many other things, the amount of water you need depends on you: your lifestyle, your body, and your personal needs. It might be nice to have a goal to meet each day, but when it comes to drinking water, your best bet is paying attention to what your body is saying rather than checking off a box. This is a "rule" that science does back up!

Figuring out how much water you need is a lot more simple than it may seem — it's about focusing on how thirsty you are. The National Academies of Sciences says, "The vast majority of healthy people adequately meet their daily hydration needs by letting thirst be their guide." If you feel thirsty, drink water! Easy to remember, right? Just keep in mind that sometimes thirst is about more than that urgent feeling for a sip of something — signs of thirst can also include headaches, exhaustion, lack of sweat, dry eyes, dark colored urine, and even feeling hungry.

There are other things to remember when trying to figure out how much hydration your body needs. If you sweat a lot, you'll need more water. If you do a lot of physical labor, drink more water.

What you eat also plays a part in how much water you should be sipping on throughout the day. Most food and drinks contain water that counts towards healthy hydration, with some containing more than others. Eating a diet full of veggies and fruits can mean you're getting a lot of your daily intake from the meals you're having. Drinks like coffee and juice also contain water that count towards your hydration. The bottom line is, you're not just getting your fill from a clear water bottle.

OK, so here's what you need to remember: drinking water, like so much else, is a personal experience. Drink as much as you think you need. If you're thirsty, grab a glass. If you feel out of sorts, try drinking some water. Don't force glass after glass down your throat because you think it's what you should be doing, though. Don't overthink it, and listen to your body. It may not be a set guideline, but it's your best way to stay healthy and hydrated.