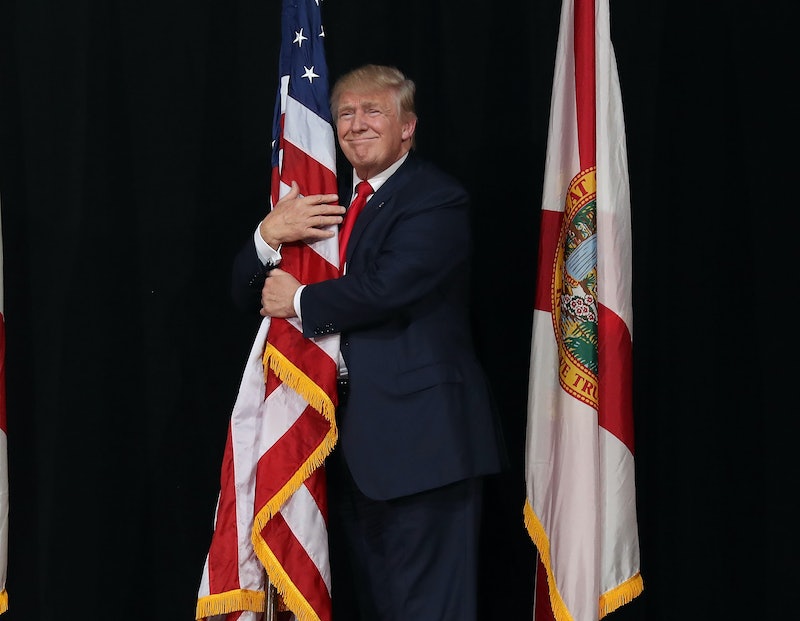 President Donald Trump has urged folks to hold off on making any concrete plans for the Fourth of July just yet, promising to hold what he claimed would be "one of the biggest gatherings in the history of Washington, D.C." But how much will Trump's July fourth event cost? Well, that depends on how the president envisions "A Salute To America."

"HOLD THE DATE!" Trump tweeted Sunday. "We will be having one of the biggest gatherings in the history of Washington, D.C., on July 4th." There's a lot still unknown about Trump's event, which he said would be called A Salute To America, making it hard to even estimate its potential cost. In fact, all the president has revealed so far is that his event will be held at the Lincoln Memorial and include fireworks, entertainment, and a presidential address.

But the Fourth of July is traditionally already a busy day for Washington, D.C., with a myriad of events happening around the city. There's the National Independence Day Parade that weaves its way down Constitution Avenue, the annual A Capitol Fourth concert in front of the U.S. Capitol, and fireworks over the National Mall to name only a few. What's more, it's currently unclear if Trump's event will seek to compete with the city's longstanding Fourth of July events or replace one of them.

While the president's announcement appeared to catch many by surprise, Trump had actually dropped a few hints about his hopes for hosting some kind of event around the Fourth during a Cabinet meeting earlier in the month. "We're thinking about doing, on the Fourth of July or thereabouts, a parade, a 'Salute to America' parade," CNN reported Trump said Feb. 13. But while Trump initially described the proposed event as a parade, he later re-characterized it. "I guess it'd be really more of a gathering than a parade," he said.

For reference, Trump's desire to host a parade has come with a hefty price tag in the past. The military parade he'd wanted to host around Veterans Day last year after watching a Bastille Day event in Paris in 2017, for example, was reported to have an estimated price tag of $92 million, according to CNBC. The president ended up cancelling plans for the parade, blaming "local politicians" for inflating costs associated with it.

This time, however, it seems as if the president has found ways to cut costs. "The fireworks [are)] there anyway, so we just saved on fireworks," CNN reported he said when discussing his tentative ideas of a Salute To America event earlier this month. "We get free fireworks because it's already being done. So, that's very good." According to The New York Times, last year's 18-minute firework display cost the National Park Service $270,000.

On Sunday, a spokesperson for the National Parks Service told The Washington Post the agency was working to create a Salute To America program but that "no final decisions have been made." So because it's unclear just what Trump's proposed Salute To America event will entail, it's impossible to put a number on it just yet.