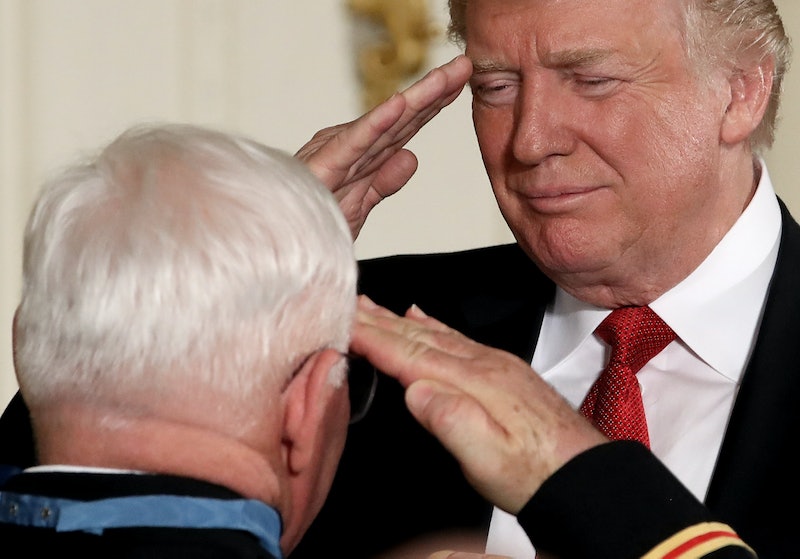 The Washington Post reported on Tuesday that President Donald Trump wants to hold a military parade in Washington, D.C. Reactions to this revelation have been quite strong, with many wondering, among other things, how much a military parade would cost taxpayers. In short, it looks like the parade could be quite expensive, potentially costing millions of dollars.

The Post reported that Trump was inspired to hold his own military parade after watching a Bastille Day parade in Paris back in July. According to military officials via the publication, Trump said, "The marching orders were: I want a parade like the one in France."

As the Post noted, parade planning reportedly got underway after a meeting Trump had with top military brass on Jan. 18. According to a statement from White House Press Secretary Sarah Huckabee Sanders, planning is still very much in the early stages.

President Trump is incredibly supportive of America's great service members who risk their lives every day to keep our country safe. He has asked the Department of Defense to explore a celebration at which all Americans can show their appreciation.

As the Post noted, military parades are not typical in the United States. On top of that, it would be incredibly costly to ship tanks and high-tech hardware to Washington, D.C. to feature in the parade. Military officials also told the Post that they were unsure how the Department of Defense would pay for the parade.

The United States has had military parades before, but they have typically been associated with the celebration of the conclusion of a war, as the Post reported in a different article from Feb. 6. The last large-scale military parade in the United States occurred in June 1991, when the country was celebrating victory in Operation Desert Storm. The Washington, D.C. parade — called the National Victory Celebration — featured thousands of marching troops, marching bands, and a display of weapons.

According to the Post, the 1991 parade cost over $8 million. As reported by CNBC, $3 million of the $8 million in costs were paid for by U.S. government funds and the rest was paid for through private donations.

While it is uncertain whether Trump's envisioned parade would be as grand of an event as the National Victory Celebration, the fact that the parade was that costly nearly 20 years ago perhaps serves as a good indication that holding a similar parade in 2018 could be quite expensive.

Many members of the public and officials in Washington have expressed concern about the potential costs of a 2018 parade, especially since the military is facing budget struggles. Indeed, on Tuesday, Defense Secretary Jim Mattis testified during a House Armed Services Committee hearing that Congress' failure to pass a budget — and reliance on continuing resolutions — was hurting the military. As the Associated Press reported, Mattis revealed that if Congress keeps passing short term spending bills that freeze spending at last year's allowances, the military will not be able to pay troops by the end of the fiscal year, nor will the Army be able to bring in 15,000 new recruits that it had planned on adding to its troops.

We need to fund the entire military for the rest of the year. The continuing resolutions are absolutely not the way to go, especially as it relates to funding the Department of Defense. ... Cost [of the parade] would be a factor.

Zeldin added that he would be open to hearing ideas about an improved Fourth of July celebration to honor U.S. troops, but again echoed concerns about cost.

Finally, in addition to overall cost concerns, many on social media took Trump to task for previously citing tremendous medical costs as one of the rationales behind his (currently halted) transgender troop ban. Many on social media found it ironic that Trump now reportedly wants to spend millions on a military parade while seemingly being highly concerned about defense spending in the past.

Overall, it is likely that, if it comes to fruition, an American military parade could be quite costly. Time will tell if and how Trump decides to proceed with his parade plans — and whether he finds the funding to hold the event.