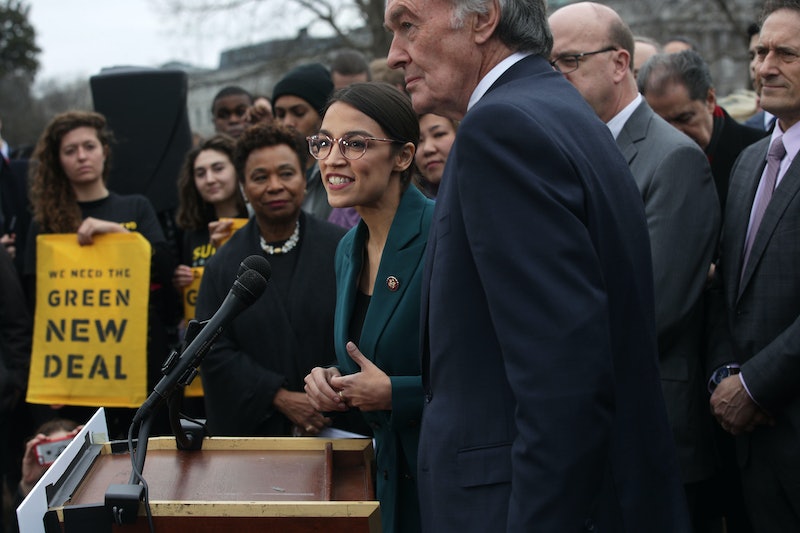 On Feb. 7, New York Congresswoman Alexandria Ocasio-Cortez unveiled a congressional resolution on her Green New Deal. The congresswoman's initiative proposes that the United States implement a host of new environmental and social policies over the next ten years. In light of the many policy proposals it contains, you might be wondering how much the Green New Deal would cost. Some believe that carrying out the resolution would be quite pricy, though Ocasio-Cortez thinks that many of these costs can and will be offset.

Ocasio-Cortez introduced the resolution along with Democratic Senator Ed Markey of Massachusetts. NPR noted that, in its current form, the Green New Deal resolution is non-binding — it's simply considered a guide to creating policies to limit carbon emissions and to improve social and economic equality. According to The Guardian, some of the proposals it suggests include ensuring that the United States achieves net-zero greenhouse gas emissions and diminishing American reliance on fossil fuels. The resolution also proposes providing social guarantees, like universal healthcare and free higher education, to all Americans, the paper noted.

Notably, as Forbes reported, because the Green New Deal is a framework, it doesn't provide detailed information about how to implement its policy recommendations. As a result, assessing the potential cost of the Green New Deal is somewhat challenging. Nonetheless, Howard Gleckman of the Tax Policy Center wrote via Forbes that the initiatives suggested in the Green New Deal would likely cost a very substantial amount of money.

For example, Bloomberg reported that the American Action Forum found that switching the United States over to renewable energy would probably cost at least $400 billion per year. Moreover, providing a free college education to every American would likely cost around $47 billion per year, the outlet noted using a USA Today estimate. Collectively, Bloomberg suggested that, based on a rough estimation, it predicts that the conservative total cost of implementing the Green New Deal would probably be around $6.6 trillion per year. Of course, this number simply represents an estimate developed by the outlet. Ocasio-Cortez has not released her own estimate of related costs thus far.

The congresswoman has acknowledged that implementing the Green New Deal will likely be costly, though she believes that the economic growth sparked by the initiative will help defray its costs, NPR reported. She's also emphasized that the proposal reflects a longterm investment in the future of the country that will pay for itself over time, the outlet noted.

Indeed, on Feb. 7, NPR host Steve Inskeep reflected on this matter when he asked the congresswoman about her about her plan to use deficit spending to help finance the Green New Deal. "So you're saying borrow the money, make the investment. The economy will grow. It will pay off the debt," he said to Ocasio-Cortez. In reply, the congresswoman agreed, saying via NPR:

Absolutely. Because we're creating jobs [in the renewable energy industry and beyond] ... And I think that that is an important distinction to make ... we actually do have the evidence. For every $1 invested in infrastructure, we get $6 back.

Overall, while implementing the Green New Deal would likely be expensive, Congresswoman Ocasio-Cortez believes that these expenses will be mitigated by the economic growth created by the plan. Time will soon tell how other lawmakers view the costs and benefits associated with the proposal, as the Green New Deal resolution will soon face its first vote in the Senate, CNBC reported.

More like this
Why You're Seeing Green Bandanas At Abortion Rights Protests
By Lexi Inks
Police Shove 'Full House' Star Jodie Sweetin At An Abortion Rights Protest
By Radhika Menon
5 Ways To Stand In Solidarity With Women In America From The UK
By Sophie McEvoy
How To Fight For Reproductive Rights, Based On How Much Time You Have
By Courtney Young
Get Even More From Bustle — Sign Up For The Newsletter