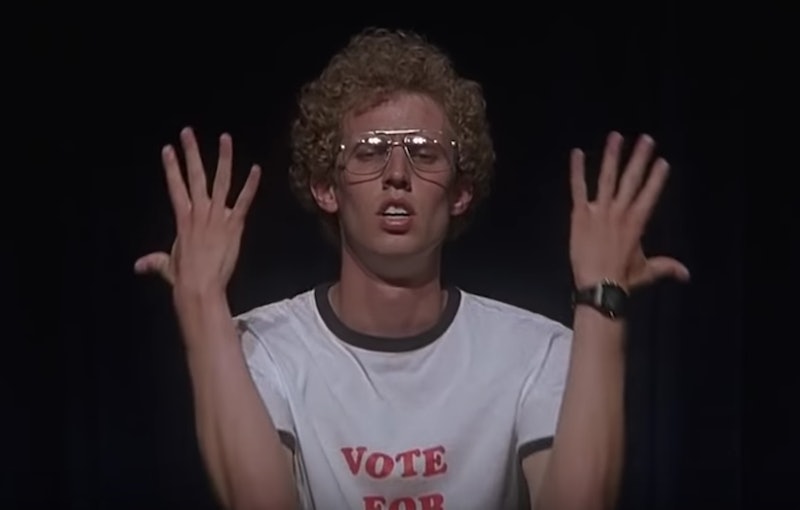 Clutch your ChapStick (for when your “lips hurt real bad!”) — 2004's cult classic Napoleon Dynamite celebrates its 15th anniversary on June 11. As you probably remember, the oddball comedy follows awkward teen Napoleon (Jon Heder) as he — always in his signature deadpan expression — navigates the trials and tribulations of high school in a small Idaho town. There's so much to love about the movie, from Napoleon's llama named Tina to his pal Pedro's (Efren Ramirez) campaign for president. And then, of course, there's Napoleon's unforgettable dance routine to Jamiroquai's “Canned Heat” that occurs at the end of the film.

The now-iconic dance number, in which Napoleon moves alone on stage in an, um, surprising routine, is one of the many parts of the movie that's cemented Napoleon Dynamite’s place in pop culture for generations to come. So to commemorate the film's anniversary, Bustle spoke to the cast and crew involved in the ridiculously memorable scene — Heder, co-star Tina Marjorino (“Deb”), and husband-wife duo Jared (writer and director) and Jerusha Hess (writer and costume designer) — to discuss the climactic (and completely freestyled) finale of the film. Here's what they had to say.

Before Napoleon, There Was Seth

Napoleon Dynamite was based on a 2002 short titled Peluca, written and directed by Jared Hess for a college assignment and starring Heder as the main character, Seth.

Jon Heder (“Napoleon Dynamite”): [Jared and Jerusha] knew I liked to dance. Jared had put me in a short film that we did a few years earlier, and it didn’t really make sense to put [dancing] in the short. So he put it in his back pocket for the time being. Then for [Napoleon Dynamite], he thought, "Hey, why don’t we put that in — not just put that in the movie, but make it the finale, the climax?" Everything sort of rides on this moment.

Jared Hess (writer and director): [While making Peluca]... I turned on the radio and that Jamiroquai song "Canned Heat" was playing, and Jon started busting out these amazing moves, and I was just finishing the little film that I had left. I didn't even use it in the short film, but while I was shooting [with] Jerusha, I was like, "Oh my gosh. This is how we have to end our feature film — with Napoleon dancing like this in front of an audience." The dynamic of him looking like a total nerd but having some amazing moves was such an unbelievable dynamic to watch.

An Education In Freestyling

Equipped with the knowledge of Heder’s love for dancing, Hess instructed the actor to do a complete freestyle for the movie's climactic dance scene in the high school auditorium. Without a choreographer, Heder enlisted help from a co-star.

Heder: I remember talking to [Jared] like, "So how are we going to do this? Are we getting a choreographer?" He was like, "No, just do what you do." The whole production was one of the last things we shot, so I thought, "Well, maybe I’ll plan something." I kept putting it off. I thought I might just wing it [but] actually, Tina Majorino, who played Deb, she was a hip hop dance instructor for kids, so she had worked with choreography before. I was like, "Can you help me?"

Tina Majorino (“Deb”): That was a really, really fun night. I’ve danced my whole life pretty much, and I’d been teaching since I was 15, so when Jon asked me to help him, I was really excited. I road-tripped it out to Idaho [to film, so I] didn’t have all my CDs with me. Obviously, the convenience of iTunes wasn’t around yet. I remember going to the one Walmart they had in town and picking up as many Jamiroquai albums as possible.

Heder: The two of us went to the Rex Kwon Do studio [from the movie] which had mirrors everywhere. I just planned out the first two eight counts — which, dance terms, is really just the first bit where I lean back and forth, where he does the jump, turns around slowly, right as he goes into spirit fingers. Up until that moment, it was choreographed. But then the main thing of the song came into it, and I started dancing and just saw where it took me.

Majorino: It’s super intimidating to know you have to dance on camera, in front of a crew, let alone for an entire song — especially if you’re not a dancer. So it was really just about making up a few eight counts that felt like his character that could ease his mind and get him into his groove. Jon killed it and is such a dope dancer.

Heder: It was sort of a mix of things. I loved watching dance and music videos growing up. I always liked Michael Jackson — any old school ‘80s and ‘90s, those big dance numbers by Janet Jackson. I was a very visual learner. I remember Saturday Night Fever, watching John Travolta do that disco thing and loving that. Some of the more modern stuff at that time were Justin Timberlake, so there were bits and pieces [of that] that snuck their way into the dance.

Majorino: It’s definitely a dream of mine to dance on film one day, but working with Jon in the small way I did was a really cool experience for me. I have always been so passionate about dancing and choreographing, and getting to use that skillset to help my buddy was awesome. But make no mistake, it was all Jon. He made that scene the iconic film moment it is.

Heder: It’s still, to this day, sort of how I dance... when I run into fans, they’re like, "Do the dance! Can you still do the dance?" But it’s like, no! There is no “the dance.” It wasn’t some planned, choreographed thing where I memorized move for move. That was just dancing for me. So if I did the Napoleon Dynamite dance, I would just freestyle.

Heder filmed the actual scene in bits and pieces, in front of a small crew; the audience reaction was filmed separately.

Heder: We were shooting in the high school auditorium and I remember hesitantly asking, "Do we need everybody in this closed set?" as if it were a love scene, like, "Who really needs to be here?" I was a little nervous. I basically requested, "Let’s kick everybody out."

Jared Hess: It was our biggest group of extras that we had... we filmed the audience reacting first, and then got 'em out, because it's tough to wrangle that many people. We weren't paying anyone. It was like, "Here's a bottle of Gatorade. Clap for us." So I was walking them through the motions of what they were responding to, then we cleared everybody out.

Heder: We tried a couple of songs.... The first song I danced to was “Canned Heat.” The second song was a Michael Jackson song from Off the Wall. I just danced for a couple minutes until I thought I’d puke. I’d take a breather, drink some water, and then we’d start up the music and start to dance again. The third song was another Jamiroquai song, so we were definitely channeling Jamiroquai.

Jared Hess: It was towards the end of the shoot. We only had one roll of film to shoot the scene. We had about nine minutes, and a song is about three minutes long, so technically we had three takes. So, what you see in the final product is like the best of those three takes that we were able to shoot [and] chop together into one cohesive dance.

Heder: One of the hardest parts of the dance was trying to stay in character, and doing the scene and trying to keep the Napoleon face [to make] sure that was consistent with the character, [and] making sure he wasn’t gonna break out into this super expressive face. It’s all Napoleon in the face, but I [felt], I'm gonna let my body go and do what it does... once I got into it, it wasn’t too hard.

About Those Moon Boots...

Napoleon's dance moves are iconic, but so is his outfit. Over the years, the character's “Vote for Pedro” tee and Moon Boots have become Halloween costume staples.

Jerusha Hess (writer and costume designer): We literally write in costume ideas into our script... it's just an easy way to set up character and tone. So before I even went to any thrift stores, we knew what Napoleon [was] gonna wear. The Moon Boots were kind of a random find. I don't know if they were written in the script. Were they? They were.

Jared Hess: They were.

Jerusha Hess: We just thought it'd be fun if Napoleon wore his winter Moon Boots all year. We tried to find them in town. But it was summer. No one had them. There was no one selling them. No thrift store had them. And my uncle, surprisingly, had a pair of the perfect Moon Boots. They were like, 20 years old. So I just took them from him. I don't know if I even bought them off him but I took them, then Napoleon wore them the whole summer, for 24 days or whatever it was — and they were falling apart and stinky by the end of it. We had to tape 'em up. I think in the dance scene, you can see tape on the boots.

The Legacy Of An Underdog

In the movie, the dance scene ends with unexpected, rapturous applause from Napoleon's classmates in the audience — a game-changing reception for the underdog.

Jared Hess: We tease [Napoleon's abilities] a little bit in the film when he gets the D-Quan's Dance Grooves video. We see him through the sliver in the door frame dancing, but it's not enough to prepare you for what's to come. So it blindsides the audience, like, "Oh wow"... [the applause] comes as such a surprise and discovery.

Jerusha Hess: It always was an underdog film. It's wish fulfillment for the nerds... Napoleon's kicked on and bullied; he has no friends; he's awkward the whole movie — until the very end. Then you realize, "This guy's really cool and we just didn't see it." So, that's a way to have the whole school cheering him on, just to know he's got it.

Heder: There’s a timelessness to Napoleon. Its theme, its setting, its environment [make it feel] like it’s not trying to pinpoint a specific time period exactly... that and the themes of growing up, friendship, bullying, and family. The story of an underdog coming to age is something that anybody can relate to... that feeling of, ‘Do you fit in your own skin and fit in your world?’ And being true to yourself and happy with who you are. And in doing so, you’ll find success and friendship — and more importantly, happiness with yourself.

Jared Hess: A lot of the characters are people who, in real life, are maybe ignored or dismissed by society. Our hope was that people who normally wouldn't get to know someone like Napoleon realize after the film that a guy like Napoleon is amazing.

Majorino: Napoleon is a character who doesn’t fit in, but is so fully and authentically himself. Same with Deb and Pedro. They are flawed and offbeat but they love themselves as they are, [and] they’re there for each other. I love that Jared and Jerusha wrote a movie with these characters that are so fully themselves, so unapologetically unique, that never attempt to fit in.

Jerusha Hess: We wanted everyone to get their happily ever after.

Heder: It thrills me that the movie still resonates, and people still really dig it.

Majorino: There’s magic in the movie, and I’m just so honored that after all this time I get to keep experiencing new generations discovering it and enjoying it, and maybe, even in the smallest way, getting permission to let their freak flags fly.