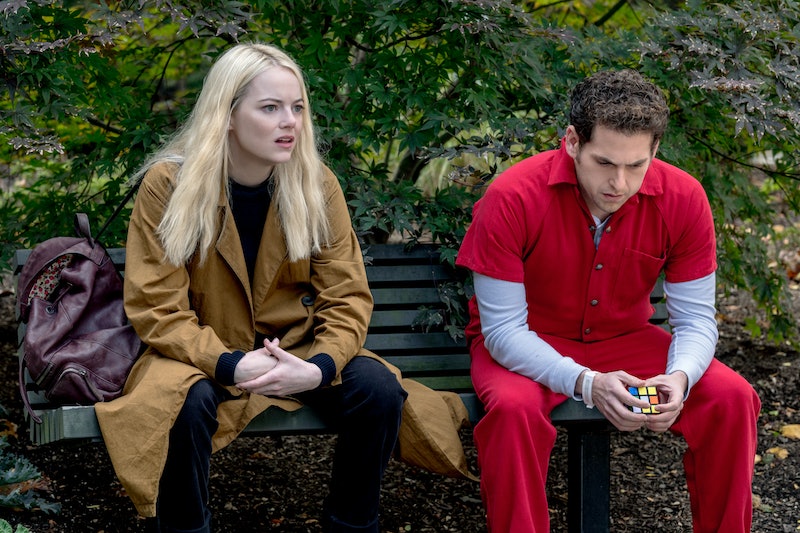 Anyone who's seen even a minute of Netflix's new limited series, Maniac, knows it's anything but ordinary. For one, it's set in a retro-futuristic New York City, complete with mini robots that pick up dog poop and curious businesses like Ad Buddy and Friend Proxy. Its main characters, Owen (Jonah Hill) and Annie (Emma Stone), each suffer from mental illnesses, and although their diagnoses aren't the primary focus, they both struggle to live normal lives while battling their respective inner demons. Maniac tackles the idea of achieving normalcy despite mental illness by thrusting its characters into bizarre, otherworldly landscapes. Ultimately, the show concludes being "normal" is both impossible and undesirable, as characters come to terms with their quirks. Spoilers ahead for all of Maniac.

"I think the intent was to be as sensitive as possible to mental illness — to not make that a joke," Maniac director Cary Fukunaga tells Bustle. "That was also why we didn't set the show in the mental hospital and at pharmaceutical drug trial instead." It's an important point, considering Maniac is loosely based on the 2014 Norwegian show of the same name, which was largely set in a psych ward.

"And this goes to a theme that I think is really important to show — the question of what is normal," Fukunaga continues. "And also about the idea that all of us are struggling with something. And so we just wanted to, in some ways, hopefully break down some stereotypes and stigmatizations, but also just be a little bit smarter about our humor and our themes." So while normal might equal mental wellness in the Maniac world, its creators want to subvert that notion.

The drug trial, which forms the main narrative of Maniac, is facilitated by Neberdine Pharmaceuticals and Biotech. The drug they're testing promises to eradicate the need for therapy in three easy pills, and both Owen and Annie volunteer, desperate for money and — perhaps — a cure. "At the end of this trial, don't be surprised if you experience pure, unaffected joy," Dr. James Mantleray (Justin Theroux) says in a hilariously awful intro video.

And it's no fluke that three of the show's main characters, Annie, Owen, and Dr. Mantleray, all deal with mental illness in some manner or other. In Episodes 5 and 6, the test subjects are assessed and given a final diagnosis. "I'm a friend," Mantleray tells Annie, "and this is normal." Except it's the furthest thing from normal, with no fewer than four cameras trained at her head assessing the honesty of her answers. Annie is diagnosed with Borderline Personality Disorder, while Owen has Paranoid Schizophrenia. However, the fact that his fictional brother, Grimson (Billy Magnussen), keeps popping up as a hallucination probably gave that one away.

"[W]hen I was reading about schizophrenia diagnoses, I was much more drawn toward the everyday experience of people who have that diagnosis than I was to maybe the mechanics of schizophrenia," Maniac creator Patrick Somerville explains to Bustle. For Owen, his day-to-day involves living in a veritable closet on Roosevelt Island and avoiding his family at all costs. "A consistent problem that comes up [for schizophrenic patients] is family members tend to sort of 'other' the person with the diagnosis after the diagnosis," Somerville says, whose wife is a psychotherapist and consulted on Maniac. "And all the family dynamics change around that someone.... Which is a very unique experience. And I just was drawn to that for Owen's character, as well."

However, it's not just the trial subjects who have underlying mental health issues. While it's said never explicitly, Dr. Azumi Fujita (Sonoya Mizuno), is likely agoraphobic. And then there's Mantleray's paraphilia, although he mentions that he rejected that diagnosis. "But we meet him f*cking an object!" Somerville laughs. "So there is some evidence on the table." And while Theroux points out that no one can really diagnose paraphiliacs but themselves, there are obviously some mommy issues going on with his character, too. "In case that wasn't clear!" Somerville interjects.

Indeed, these diagnoses are not the only reasons these characters are struggling, since they also have difficult relationships with their parents. Owen is the passive son in a toxically masculine family, where his schizophrenia is exploited to get his domineering brother, Jed (Billy Magnussen), out of scrapes. Annie's mother suffered from some kind of mental illness and left the family when she was young. Mantleray's mother Greta (Sally Field) is a hugely popular pop psychologist who doesn't seem to apply her own teachings at home.

"My basic point of view is that our relationship with our parents has a profound impact on who we become," Somerville says. "And then there's more." In other words, yes, Annie, Dr. Mantleray, and Owen's families caused a lot of their mental distress, but that's not the whole story. After all, this is Maniac, and that would be too simple. That sentiment is echoed in Episode 6, when Test Subject 11 (Allyce Beasley) says, "I think it's too easy, though, when people blame everything on the parents. As though we're just revisions and mixtures of them. Isn't that what they say?"

And perhaps being ordinary isn't all it's cracked up to be. In Episode 8, Ellie (Julia Garner) tells Annie about a particularly disturbing reaction she had with their mother when she was young. "She swiped my finger across my forehead and asked what she'd done to deserve a daughter like me," Ellie recalls, sadly. "And I asked her what she meant. And she said, 'Utterly, predictably normal.'"

These idealistic pills are meant to help people reach the end of their rainbows, but no one in Maniac is anywhere near theirs. The city of Atlantis and Cervantes's lost chapter of Don Quixote are referenced several times throughout the series, seemingly to represent the unattainability of a magic pill or a simple cure.

It's the green light that recedes before them. "Maybe this last pill does something for me," Test Subject 7 (Stephen Hill) tells Annie during the last phase of the trial. "Make me normal again." And while it's unclear what happened to everyone after the trial concluded, it's doubtful that Neberdine's test subjects became "normal" again. And yet Dr. Mantleray is still unable to give up his life's work, announcing that it was a complete success. "Congratulations," he says through tears. "You are healed." At least Owen and Annie — and us viewers — know it's OK if that's not the truth.

More like this
The ‘Emily In Paris’ Season 3 Release Date Is Here, Plus The First Footage
By Bustle Staff
The ‘You’ Season 4 First Look Shows Joe’s New Identity And Potential Victims
By Bustle Editors
New ‘Lupin’ Part 3 Teaser Hints That Assane Will “Go Out In Style”
By Brad Witter
The First Clip From Netflix’s Queen Charlotte ‘Bridgerton’ Prequel
By Bustle Editors
Get Even More From Bustle — Sign Up For The Newsletter