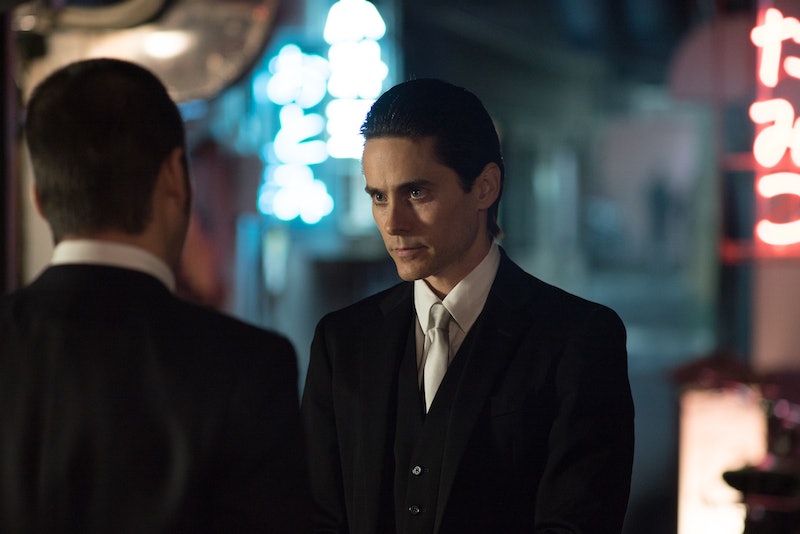 When it comes to race, Netflix's new original film The Outsider, available now, has many problems, the most glaring of which is that it's about a white man (Jared Leto) who joins the yakuza (essentially the Japanese mob). But besides the fact that the movie suffers from a painful white savior narrative and prioritizes a white man's story over those of the Japanese men around him, The Outsider also fetishizes Asian women in a twisted effort to create sympathy for its white male lead.

Spoilers ahead. In the film, Leto plays Nick, an American ex-soldier who makes a connection with Kiyoshi (Tadanobu Asano), a yakuza member, while in a Japanese prison. When Nick is released, he goes to work for the Shiromatsu family, of which Kiyoshi is a member, as an enforcer. Quickly, he earns their trust and a place in their ranks, despite constantly being called "gaijin" — outsider. Already, based on this premise, one can see why critics have been skeptical of the film. While there may not be whitewashing, The Outsider is still just another example of Hollywood using a white protagonist to tell a story about Asian characters.

To make matters worse, the film uses an overly-sexualized Asian female character to enhance this white male lead. There is a long history of fetishizing Asian and Asian American women in Hollywood that has been perpetuated time and time again both on stage and screen, from Miss Saigon to James Bond movies like Skyfall. And as shown by The Outsider, which was written by a white man (Andrew Baldwin) and directed by a white man (Martin Zandvliet), the problem continues to persist in 2018.

Throughout most of The Outsider, Asian women are kept in the background, seen and not heard. They are half naked strippers and prostitutes, actors and arm candy — little more than hyper-sexualized set dressing. This is not only the norm set by the movie, but by the world it portrays. On his first yakuza mission, Nick confronts an American trader who lashes out at him, accusing Nick of "banging some slanty-eyed broad." And this line perfectly sums up how the movie sees Asian women. The one named female character in The Outsider is Miyu (Shiori Kutsuna), and her sole purpose is to entice Nick into bed, get pregnant, get beaten and almost raped, and then get rescued (in that order).

Miyu is Kiyoshi's sister, who works as a waitress at the Shiromatsu bar alongside a group of female strippers. She and Nick share one glance and a few sentences in a scene about 15 minutes into the film. Half an hour later, they meet again and she invites him to go to bed with her. It's at this point that Miyu makes the transition from sexual set dressing to a sexual plot device. Without revealing anything about her past, her personality, or her wants and desires, she lays shirtless in bed as Nick gets dressed to leave and exchanges coy smiles with him when he receives his yakuza tattoo. As the movie goes on, she is his one vice, and he keeps going back to her despite Kiyoshi explicitly telling him not to see her. And, when Miyu is attacked by an old lover and Shiromatsu member Orochi and later reveals her pregnancy, she becomes Nick's path to redemption.

Miyu isn't so much a character as she is a way for The Outsider to justify its white savior ending. The film ends with the Shiromatsu family fractured, its leader dead at the hands of a rival yakuza family. Unsure of what to do, the remaining members (Nick included) are given the opportunity to leave Osaka and live their lives in peace, so long as they never go against their enemies. But Nick has a score to settle. He goes after Orochi, now aligned with the rival group, and slits his throat to protect Miyu and his growing family. When he returns to Miyu, the remaining Shiromatsu who had been guarding her until his return bow to him, recognizing him as their new leader. Her passivity and perceived helplessness, as first a sex object and then a pregnant woman, clears the path for Nick's rise to power, for him to become a literal white savior.

It's bad enough that The Outsider tells yet another story about a white character in an Asian world. But to capitalize on the stereotypical fetishization of Asian and Asian American women in order to promote a white savior story just adds salt to the wound.