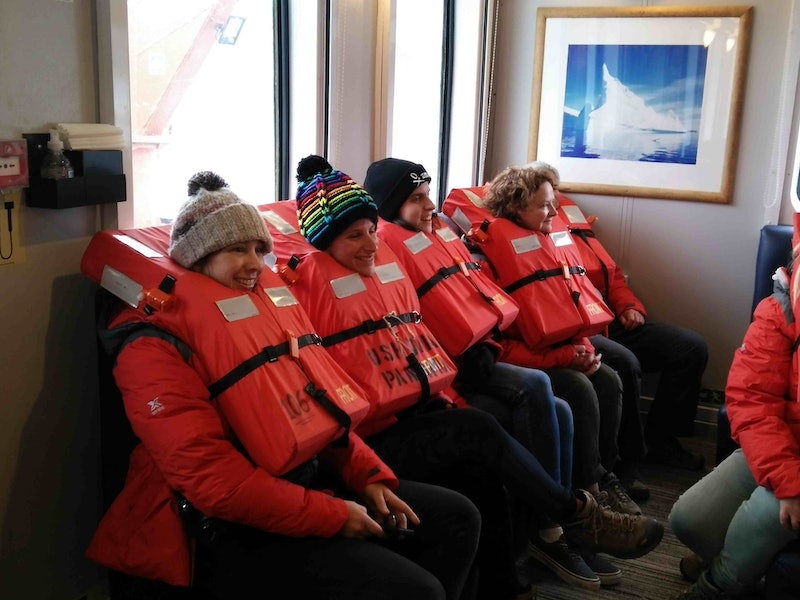 While the goal of networking is to bring people together, one program is proving that you don't have to slap on a name tag and go to a happy hour in a crowded bar to interact with other people in your field. Homeward Bound is a leadership initiative for female scientists, and the program kicked off its efforts last December with an expedition to maybe the least crowded locale on the planet: Antarctica. These women will take their ice below their feet, rather than in a drink, at their meetups.

Homeward Bound looks to provide leadership training to female scientists and increase their influence in policy and advocacy. According to its website, its vision is:

To equip a 1,000-strong global collaboration of women with a science background to lead, influence and contribute to policy and decision making as it informs the future of our planet within 10 years.

The inaugural group of 76 women set sail for Antarctica last December for a three-week excursion, which focused on teaching them how to magnify their research findings beyond the scientific community.

Homeward Bound is filling a void for women in the sciences, participant Heidi Steltzer tells Bustle. Steltzer, who is a climate scientist, points to how her undergraduate program was close to 60 percent female, but at every level of advancement in her education and career, those numbers have dwindled.

"You have your group of friends that you made early, but it doesn't keep getting replenished," Steltzer says. "I have a lot of male colleagues who are incredible and very supportive, but there's something different about having women to talk through some of the career-work balance and desire for impact challenges."

On social media, Homeward Bound talks a lot about encouraging women to "find your voice." Steltzer says that what motivated her to apply to the program was to find her own voice for connect the research she is doing to real-world action.

Scientists are not given the training to work outside of their research, which Steltzer says stunts what they are able to do with their work. According to her, they don't receive sufficient leadership training, and they aren't trained or directed on how to effectively communicate their findings to a non-scientific audience.

"There’s a set of skills that I haven’t been taught as a scientist that are key to any endeavor where you want to have more impact," Steltzer says. "And for me, it's wanting to have the science have greater impact."

The choice to go to Antarctica wasn't just a cursory decision. One of the reasons for going to Antarctica, besides its beauty and inspirational landscapes, Steltzer says, was to push the women out of their comfort zones.

Being in such an environment really allowed the women to intensely bond in the kind of way that comes from sharing a unique experience in a remote location. "It gives you the time to focus more on getting to know each other, on what were learning and on incredibly meaningful conversations," Steltzer says. "One of the best things that happened on the trip, even moreso after the trip, is the discussions I've had with the women I've met."

While science is a very competitive field, one of the great things about this program is that it teaches women to work collaboratively on projects, even across disciplines of science, explains Steltzer.

"How do we create a culture of leadership where we’re really looking to foster strength in ourselves, but also in others?" Steltzer says. "We recognize that there needs to be collaboration and inclusiveness. And I think that women tend to act in those ways as leaders, and so increasing the number of women in leadership positions increases that dynamic."

And the number of women to collaborate and network with will continue to grow over the next decade, with each new group that journeys to Antarctica with Homeward Bound. The inaugural group will help the newcomers when they join the program, continuing to expand the support network they started. But beyond that, participants are encouraged to create their own groups and programs to connect women in science. With each new foot that steps on the glacial ice, the reach of Homeward Bound will grow exponentially, and if all goes as planned, female scientists will continue to expand their influence in the STEM world.

"I feel like Homeward Bound gave me a sense of comfort to move forward boldly on something I've wanted to do for 20 years, but I felt constrained," Steltzer says. "It's easier to be bold when you have friends to be bold with."

More like this
Jiu Jitsu Champ Kim Blake Is Pushing For More Women In The Sport
By Kathleen Ferraro
Which Cast Member of 'Westworld' Season 4 Has the Highest Net Worth?
By Meg Walters
What Is Megan Thee Stallion’s Net Worth? The Traumazine Hitmaker Isn’t Worried About A Budget
By Hugh McIntyre
Gemma Collins' Net Worth Is Only Going Up
By Catharina Cheung
Get Even More From Bustle — Sign Up For The Newsletter