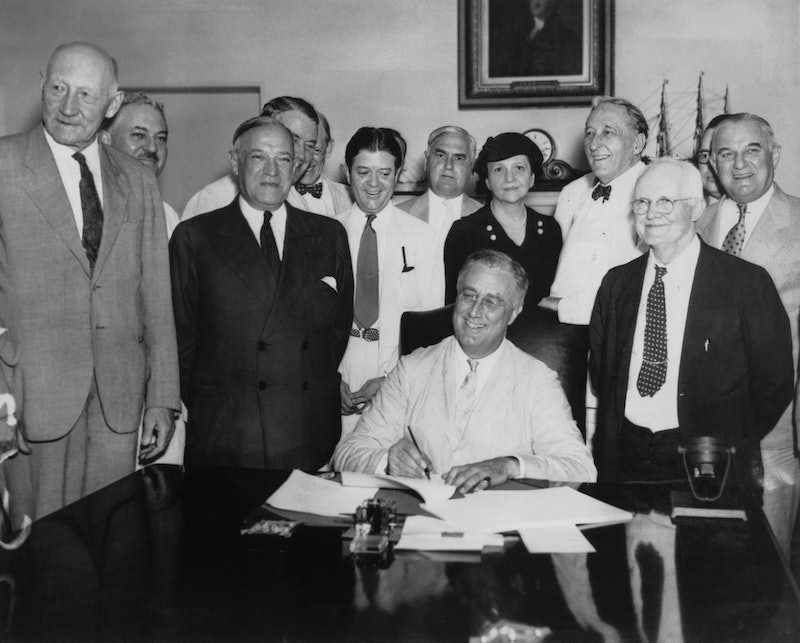 Technically speaking, there are not an infinite number of under-appreciated stories of historically extraordinary achievements by women. "Infinite" is defined as mathematically indefinite and unending, which of course is not the case with human history. But figuratively speaking, there most certainly are an infinite range of mostly unknown stories, and Frances Perkins' is one of those. As the first female member of any president's cabinet, Perkins worked as the secretary of labor for Franklin Delano Roosevelt for 12 years. Because of her work there, Perkins has become known as "the woman behind the New Deal," but that only scratches the surface of her life's enormous impact.

Perkins' early years are commendable in their own right. She attended Mount Holyoke College, where she picked up progressive ideas about women's rights — most predominantly, the suffragist push for voting rights and worker's rights. Growing up in the late 1800s in a strict and staunch Republican household, Perkins had been told that the reason for good people living in poverty was "alcohol or laziness."

But her views changed in college. Perkins had to visit local factories, and found the conditions there abhorrent, especially for women and children. Later on, in 1911, Perkins happened to be in New York to witness firsthand the infamous Triangle Shirtwaist Fire that killed 146 workers, most of them young and female. This was Perkins' "Road to Damascus" moment, a life-changing event that propelled her toward reforming labor laws.

As a younger woman, Perkins had spent time working at Chicago's Hull House, talking with and providing guidance for people living in poverty and unemployment. She also went undercover and posed as one of the young women — often black women from the South and newly-arrived foreigners — who were regularly swindled into prostitution rings. According to Maureen Corrigan at NPR, Perkins knowingly risked her own life in the process.

But Perkins is remembered most of all for her larger political work. During her rise in the wheeling and dealing culture of New York's Tammany Hall politicking, Perkins crafted an intentional mode of working as a woman in a man's world. She kept a file called "Notes on the Male Mind," and took to wearing matronly outfits to purposefully remind the men she worked with of their mothers. Because if they thought of their mother, they tended to treat both her and her ideas with more respect. And the most important thing to Perkins was getting her policies enacted, whatever that entailed.

In the 1918 governor's race in New York, women had the right to vote for the first time. Perkins campaigned for Al Smith, an old friend of hers, and after he won, Smith put Perkins on the New York State Industrial Commission. At a salary of $8,000, she became the highest paid woman in the history of American government. The next man elected as New York's governor was none other than FDR himself, and he promoted Perkins to industrial commissioner.

When the Great Depression hit, Perkins hit back. As the administration of President Hoover issued false employment statistics, Perkins and Roosevelt looked for ways to deal with the economic hardships they saw all around them. Perkins publicly denounced the claims of Hoover, saying, "It is cruel and irresponsible to issue misleading statements of improvement in unemployment, at a time when the unemployed are reaching the end of their resources."

And when Roosevelt won his presidential bid in 1932, he brought Perkins to Washington, D.C., with him, appointing her to his cabinet as the secretary of labor. Perkins' policy goals were a veritable hit list of progressive ideals: Social Security, unemployment benefits, ending child labor, instituting a mandatory minimum wage, limiting the work week to 40 hours, and universal health care. As any close reader will notice, she achieved all but the very last one.

She had to sacrifice to do it. There were plenty of men who objected to a woman holding such high office, and Perkins was not oblivious to the reality of her situation. She even insisted on sitting with other cabinet members' wives at state functions, rather than in her rightful place with the rest of the president's appointees. When she took the job as secretary of labor, her former boss Al Smith commented, "Men will take advice from a woman, but it is hard for them to take orders from a woman.”

Nevertheless, she persisted. And from her perseverance, Americans now enjoy much greater protection from extortioner business practices, a guaranteed retirement income, unemployment benefits, minimum wage, and a 40-hour work week. It's a remarkable inheritance from a remarkable woman.