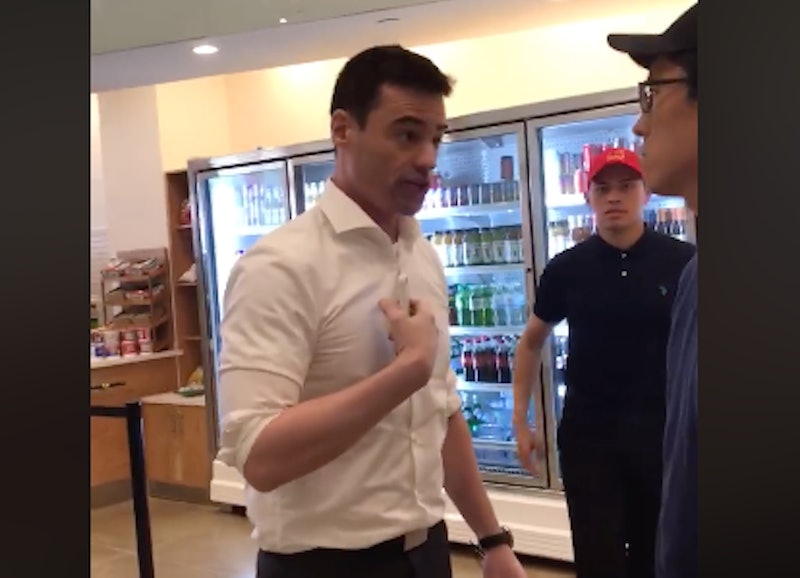 A New York attorney believed to be the man who went viral earlier this week for a heated verbal attack on Spanish-speaking restaurant employees woke up Thursday as the most hated man on the internet. But the fallout from New York lawyer Aaron Schlossberg's alleged racist tirade appears to be costing this lawyer more than just his social media popularity. Folks outraged over the video are targeting his law firm and filing grievances against him as an attorney.

"What was witnessed in the vile video from Mr. Schlossberg, which has since gone viral, is [a] humiliating and insulting attack on the more than 50 years of progress that this nation has made since the Civil Rights movement," the pair wrote in their grievance. "The audacity to profile and verbally assault innocent bystanders and customers in a public commercial location is a violation of our civil society. We watched Aaron's video and we were disgusted."

In the video, the man identified as Schlossberg can be seen threatening to call U.S. Immigration and Customs Enforcement (ICE) after overhearing a restaurant employee speak Spanish. "Your staff is speaking Spanish to customers when they should be speaking English," the man says to someone who appears to be a manager. "My guess is they're not documented, so my next call is to ICE to have each one of them kicked out of my country."

The man then argues that the Spanish-speaking employees and customers should speak English because "I pay for their welfare, I pay for their ability to be here."

A website for Schlossberg's law firm, The Law Office Of Aaron M. Schlossberg, ESQ., P.L.L.C., notes the attorney "is fluent in Spanish."

A spokesperson for Rep. Espaillat told the New York Times the congressman had identified Schlossberg as the man in the video based on "credible reports." However, reporters from the New York Post who confronted Schlossberg outside his home Thursday heard him telling someone on the phone, "They're claiming things that aren't true. ... They're defaming me."

It's unclear if any other formal complaints have been filed against Schlossberg with New York's Attorney Grievance Committee. A spokesperson for the New York Unified Court System tells Bustle that complaints are considered confidential unless and until the committee finds reason to discipline an attorney. A database belonging to the New York State Unified Court System shows that as of Thursday, Schlossberg had "no record of public discipline."

That's not the only fallout Schlossberg is facing after journalists and lawmakers identified him as the man in the video. ABC News' Derick Waller reported Thursday that Schlossberg was "no longer welcome in the building where he rents office space" for his law practice. Security for the Madison Avenue building where Schlossberg's law firm occupies an office told the New York Daily News the attorney would not be allowed to enter.

"If he comes here, we're going to kick him out," an unnamed member of the security team told the newspaper. Schlossberg, however, told the New York Daily News that information was "false."

But Schlossberg may prefer to steer clear of his office for a few days anyway — a GoFundMe campaign has raised enough money to send a mariachi band to Schlossberg's office for a taco and piñatas party. "We are countering hate and racism with the sound of music," Mark Goldberg, the user behind the campaign, wrote in the fundraiser's story.

Outraged users have also flooded a Yelp page for Schlossberg's law firm with one-star reviews, forcing the crowd-sourced review platform to issue an "active cleanup alert" for the listing. Yelp issues such alerts when a business attracts reviews as a result of media coverage.

In a statement issued Thursday, Rep. Espaillat expressed concern that the rhetoric President Donald Trump has used when talking about immigrants was emboldening his supporters to engage in racially-tinged tirades like the one that went viral earlier this week. "The statements made by this attorney at a New York restaurant serves as further proof of the wave of intolerance that is running rampant across our country," Rep. Espaillat said. "The White House is sending a clear message that you can say anything and get away with it. ... We are sending this grievance to say that you cannot engage in xenophobia, bigotry, hate and get away with it. Such behavior should never be tolerated."