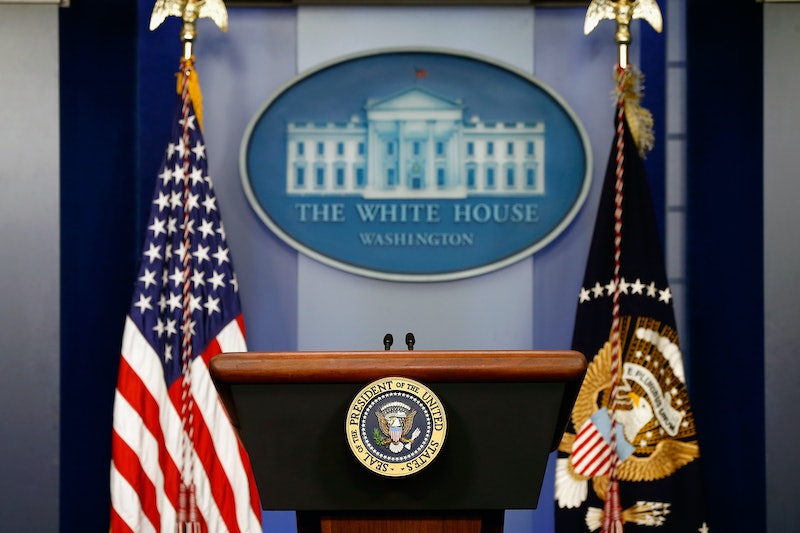 On Jan. 28, White House press secretary Sarah Huckabee Sanders held her first press briefing of the year. Given the length of time — 41 days — since Sanders last took the podium, you may be wondering if allowing so much time to pass in between briefings aligns with the practices of press secretaries past. In looking at how often White House press briefings happened under Obama and other previous administrations, it seems like Sanders' limited briefings may represent a break with tradition.

The Washington Post also noted that, based on data from the American Presidency Project, on average Sanders takes fewer questions from reporters during her press briefings than most prior press secretaries — and also has more contentious interactions with them. Notably, one of Obama's former press secretaries, Josh Earnest, had the most contentious exchanges on average, though he took an average of 15 more questions per briefing than does Sanders, the paper reported.

Sanders reflected on why the Trump administration holds fewer briefings during an interview on Fox News Sunday in September 2018. Sanders asserted that the administration prefers to prioritize Trump's direct interaction with the press over secretary-led briefings. As Sanders described on Fox News (via The Hill):

As CNBC described, Trump does frequently directly address the public and the press via Twitter. He has also held more short question-and-answer sessions and conducted more interviews in his first year and a half in office than Obama and Bush, according to a study from Martha Joynt Kumar, an emeritus political science professor at Towson University (via CNBC).

However, the New York Times reported that Kumar also said that Bush and Obama's press secretaries' "held regularly scheduled briefings independent of whether their president answered reporters’ questions.” Indeed, some members of the press believe that media access to the president isn't a substitution for the press briefings. Olivier Knox, the president of the White House Correspondents’ Association, told the paper that the decrease in briefings represents a "retreat from transparency and accountability." Knox also added that the "... public back-and-forth we’ve come to expect in the James S. Brady briefing room helps highlight that no one in a healthy republic is above being questioned."