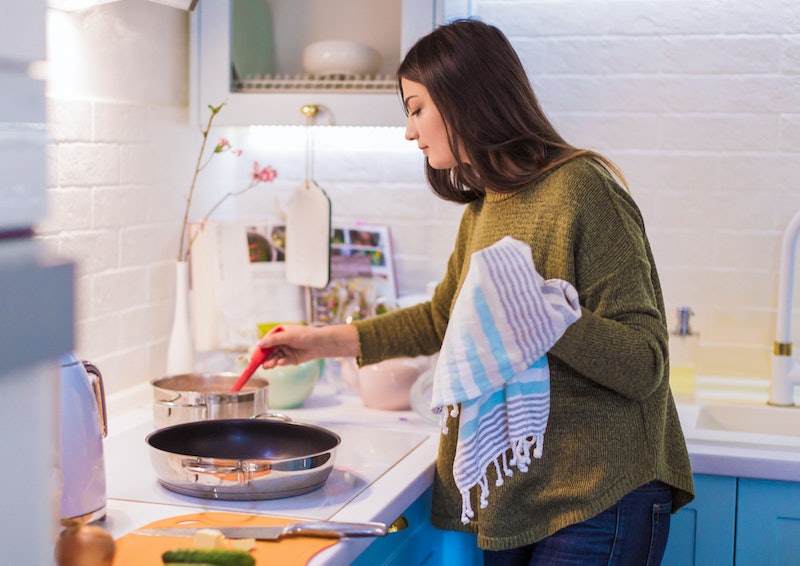 There’s nothing quite like getting all the chores on your to-do list ticked off to make you feel like a domestic goddess. Step over Mrs Hinch, once I’ve got my clothes in the washing machine, the carpet hoovered, and the pots and pans put away, there’s no stopping me. And if there’s one real unsung hero of the kitchen clean up, it's the tea towel. From drying dishes to mopping up spillages, they're incredibly handy, aren't they? But the question is, how often should you change your tea towels? They might be useful and come in super cute patterns, but they bear the brunt of most of the mess in the kitchen, and that can lead to all sorts of issues.

In June 2018, researchers from University of Mauritius studied the bacteria living in 100 kitchen towels after a month of use without washing. And the results were quite scary. While most of the bacteria found on the towels was relatively harmless to a healthy person, there were traces of E. coli and S. aureus present, both of which can be linked to food poisoning.

Researchers found that the size and diet of the group using the towel, as well as the ways in which they were using it (eg. wiping utensils, drying hands, holding hot utensils, and cleaning surfaces), all had an effect on the amount of bacteria that built up. Dr. Biranjia-Hurdoyal, Senior Lecturer from the Department of Health Sciences at the University of Mauritius, told Science Daily, “Humid towels and multipurpose usage of kitchen towels should be discouraged. Bigger families with children and elderly members should be especially vigilant to hygiene in the kitchen.”

Author of Clean My Space Melissa Maker thinks that you should be washing your tea towels at least every other day. Speaking to cooking website kitchn, she said: “Think about it: They get used so many times in one day! And even if you lay them out, they rarely dry fully between uses.” She continued:

“If a cotton dish towel is not 100% dry, it will grow mildew and smell musty and gross, then you’ll have to wash it two or three more times to get the smell out.”

Founder of Clean Mama and author of Simply Clean and The Organically Clean Home Becky Rapinchuk agreed with Melissa Maker. She told cooking website Eat This, “I recommend changing kitchen towels daily in the kitchen and family bathrooms. This habit is essential for keeping food-borne pathogens and other bacteria away.” And clinical professor of Microbiology and Pathology at NYU Philip Tierno backed up this. He told CBS, “While they should be changed daily, when knowingly contaminated by food or meat drippings, etc, change them out for a new towel immediately."

The science behind why your tea towels should get thrown in the washing machine at the end of the day makes total sense. When they are used to wipe up spills and dry dishes, they’re going to start getting a little bit disgusting. In fact, they may just be one of the dirtiest things in your kitchen. Yikes.