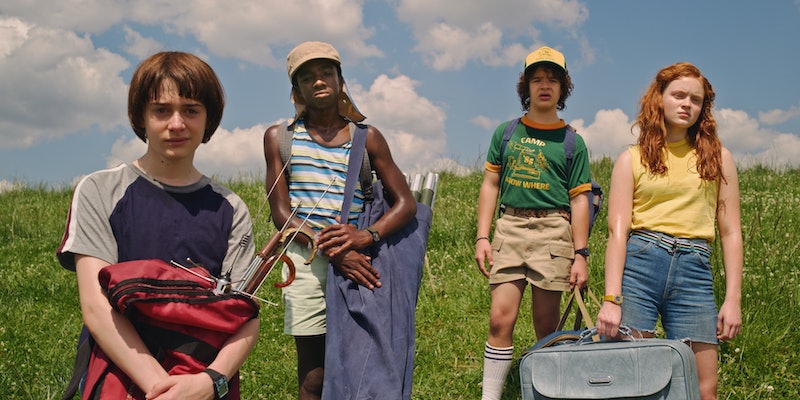 Stranger Things 3 premieres almost exactly three years after the first season hit Netflix and became a surprise sensation. Since then, the young actors who've brought Mike, Eleven, Will and the rest of the gang to life have done a lot of growing up — and so have their characters. So if you're a little confused about how old the Stranger Things kids are now, that's understandable — especially considering the show has hopped around a bit in time (and across dimensions).

However, it's not that hard to figure out how old they're meant to be in Stranger Things 3, as the show has followed a pretty clear timeline. It first picked up in November 1983, then jumped to Halloween 1984 for Stranger Things 2. Stranger Things 3 will pick up in the summer of 1985, so it's been about a year and a half since we were first introduced to everyone.

The main "crew" of Stranger Things — Mike, Eleven, Dustin, Lucas and Will — were all 12 years old in the first season, which means they're now between the ages of 13 and 14. Nancy and Jonathan, meanwhile, are now between the ages of 17 and 18, and resident babysitter Steve Harrington is roughly 18 or 19, as is the villainous Billy Hargrove. His stepsister Max was the same age (or at least in the same grade) as Mike et al when she moved to Hawkins in Season 2, which suggests she's also 13 or 14 now.

Stranger Things' first two seasons were mostly focused on taking down evil scientists and dangerous, otherworldly monsters, but as the kids get older, they're beginning to learn that the only thing stranger than multiple dimensions is being a teenager. As Stranger Things creator Ross and Matt Duffer recently teased to Entertainment Weekly, Mike and Eleven's relationship is heating up this season — much to the chagrin of Hopper. "Now that Eleven is no longer a secret, Mike and Eleven's romance is in full swing — to the growing irritation of an overprotective Hopper," Ross told the magazine.

And Dustin, too, may be exploring a new romance. "When we meet Dustin this year, he has just returned from science camp — and he may or may not have a brand-new girlfriend," Matt said.

But not all of the guys are as ready as to embrace adolescence (and the girl drama that comes with it) as Mike, Dustin, and Lucas (who, let's remember, is still dating Max). "Will is excited for a summer of D&D campaigns," Matt continued. "But his friends suddenly seem more interested in girls than games. Are they going to leave him behind?"

If Stranger Things lasts long enough to watch these children grow into adulthood, the show — and its characters — could end up looking very different than when it first started. Only time will tell if we eventually see a flannel-clad Eleven rocking out to Nirvana as a moody twenty-something in Stranger Things 8 somewhere down the line.

More like this
'Stranger Things' Finn Wolfhard Is “Proud” Of Noah Schnapp For Coming Out
By Sophie McEvoy
Netflix Shut Down 'Bridgerton' S3 Rumours About A “Very Dark” Storyline
By Bustle
'The Queen’s Gambit' Season 2 Tweet Wasn’t From Anya Taylor-Joy
By Mary Kate McGrath, Jack Irvin and Grace Wehniainen
6 'Happy Valley' Easter Eggs You May Have Missed
By Sophie McEvoy
Get Even More From Bustle — Sign Up For The Newsletter
From hair trends to relationship advice, our daily newsletter has everything you need to sound like a person who’s on TikTok, even if you aren’t.