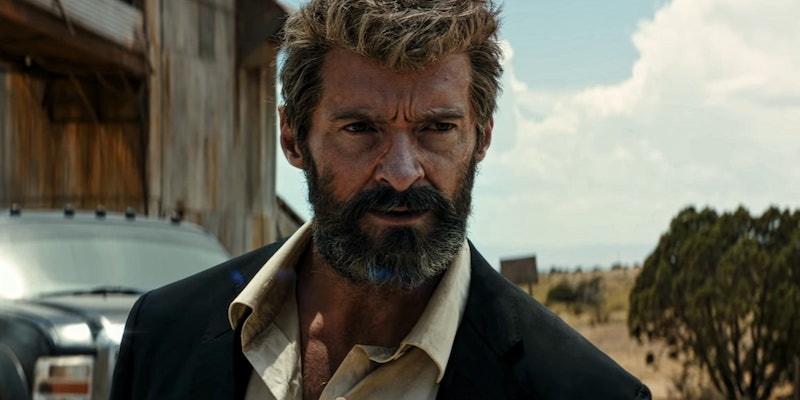 On some level, every superhero movie endeavors to show the humanity and fallibility of extraordinary individuals. The next X-Men universe movie Logan (out Mar. 3) looks as if it will break new ground in that area. Hugh Jackman is back as Wolverine, though not the one audiences first met in 2000's X-Men. This Logan is world-weary and riddled with both emotional and physical scars. His accelerated healing powers mean that Logan will live much longer than a non-mutated human. But he certainly does age. So just how old is Wolverine in Logan?

After solidifying his status as a fan favorite of Professor X's mutant team in the first three live-action X-Men movies, Logan went off on his own in the 2009 prequel X-Men Origins: Wolverine. His backstory goes like this: Wolverine was born James "Jimmy" Howlett in Canada circa 1832. As a child, he learns that his well-to-do parents have been keeping his real paternity a secret from him at the same time that his mutation first asserts itself. Jimmy Howlett's father is not John Howlett, it's the man who kills him: Thomas Logan, the family groundskeeper. In a rage, Jimmy attacks and kills his real father with his recently revealed adamantium claws. His mother throws him out, more for the mutation than the murder. Out on his own but for Thomas's legitimate son and his own half-brother Victor, Jimmy adopts the name Logan.

So to figure out Wolverine's current age, all you need is the date when Logan is meant to take place. Director James Mangold told ComicBook.com that Logan is set in 2029, which makes Wolverine 197 years young. The director chose the near-ish future as the movie's setting for a practical storytelling reason. "There's an epilogue scene in Days of Future Past which is 2024, or 2023, something like that," Mangold said in the ComicBook.com interview. "I just wanted to get far enough past. My goal was real simple: it was to pick a time where I had enough elbow room that I was clear of existing entanglements."

Wolverine is nearing his bicentennial year in Logan, but with wisdom and experience comes some body breakdown. His rapid healing process hasn't slowed necessarily, but it's changed. And the physical evidence is etched into his skin. Mangold explained to Empire how his advanced age requires that Logan be marked by combat in this particular movie. "We imagined he heals quickly, still, but it leaves a scar," Mangold said. "The simple idea was that his body would start to get a little more ravaged with a kind of tattooing of past battles, lacerations that remain of previous conflicts."

And skin imperfections aren't the only sign that Logan's Wolverine is a little past his prime. In October of last year, Mangold shared the second page of the Logan screenplay on his Twitter account, and it includes a description of the current state of the mutant's physical capabilities. I'll be honest: he's not going great. The script page reads:

"As for our hero, well, he's older now and it's clear his abilities aren't what they once were. He's fading on the inside and his diminished healing factor keeps him in a constant state of chronic pain — hence booze as a painkiller. So by all means, go ahead and worry about him."

Logan will find an almost 200-year-old Wolverine facing a decline he may have never thought possible. I do plan on worrying about him, just like the script is telling me to do. But there's hope for the future in the form of X-23 (Dafne Keen), a child mutant who reminds Logan a lot of himself.

More like this
Everything To Know About 'The Hunger Games' Prequel Movie
By Grace Wehniainen and Radhika Menon
Revisit 1992’s 'A League Of Their Own Cast' Photos After The New TV Series
By Grace Wehniainen
At 28, Lesley Manville Was Acting, Picketing, & Singing Kate Bush Songs
By Olivia-Anne Cleary
Reese Witherspoon Gave Fans Hope For 'Legally Blonde 3' After This Surprising Movie Inspired Her
By Jake Viswanath
Get Even More From Bustle — Sign Up For The Newsletter