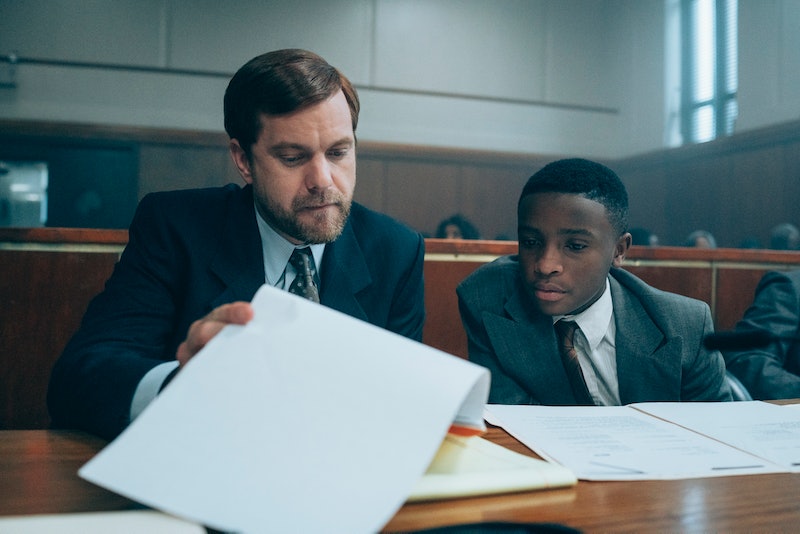 Atsushi Nishijima/Netflix
By Rebecca Patton
May 31, 2019

Ava DuVernay's latest project for Netflix, When They See Us, follows the true story of five teenage boys who were wrongly convicted of raping a white woman in Central Park in April 1989. The series premieres Friday, May 31, and will depict these five subjects — who have been named the Central Park Five — as both teenagers and adults, revealing the devastating effect the wrongful verdict has had on their lives. And it's sobering to see just how young the Central Park 5 boys were at the advent of the crime — in between the ages of 14 and 16, per the New York Times.

In April 1989, an investment banker named Trisha Meili was jogging in Central Park when she was beaten, raped, and left in a coma, per the New Yorker, and when she woke up, had no memory of the incident. The boys were interrogated for hours by the police before four of them eventually confessed on video, per the article. As a result, all five were convicted in 1990 during two different trials, the article reported.

However, It wasn't until 2002 that a convicted murderer and rapist named Matias Reyes confessed to being the sole perpetrator of the crimes against Ms. Meili, per the New York Times. His DNA matched, and the Central Park Five's convictions were overturned in December 2002, according to another Times report. By that time, the men had all completed their prison sentences, which spanned from 7 to 13 years, per the article.

"It's over! Thank you, Jesus," Linda McCray, Anton's mother, exclaimed, the article reported. Kevin's sister, Angela Cuffee, said, "I think I stopped breathing for a minute. I can't even tell you — it doesn't feel real. I can't even speak." However, it wasn't until 2014 that the men settled their civil rights suit, per the New York Times, which amounted to $41 million dollars total — approximately a million for each year in prison. McCray, Richardson, Salaam, and Santana each received $7.125, and Wise, who had a longer prison sentence, was given $12.25.

Their plight has previously been documented in the 2012 documentary, The Central Park Five, which was directed by David McMahon, Ken Burns, and his daughter, Sarah Burns, but DuVernay's series will show viewers what really happened that night in 1989. Here's how old each of the five boys were when their lives changed forever.

According to the New York Times, McRay was 15 years old when he was arrested. The boy (portrayed by Caleel Harris and Jovan Adepo in the Netflix series) was convicted of rape and assault, per the Innocence Project, before being exonerated in 2002. He served six years in prison.

Wise was 16 at the date of the crime, per the NYT, and was consequently tried as an adult. He served 12 years, per the Innocence Project, and was charged with assault, sexual abuse, and riot. "We were just baby boys, we were just trying to be entrepreneurs, having fun being kids," he told the Times, echoing an interview he'd given Time magazine back in 2013. "To go from kids, man, kids of New York to being called 'menaces to society' … It's just sad how our lives turned into a raw deal," he said. "They kidnapped me. I would call them terrorists. They kidnapped me."

According to his personal website, Salaam was 15 during the inciting incident, and the Innocent Project reported that he served six years and eight months in prison. In an op-ed for the Washington Post, Saalam said, "Starting when I was 15, my life was not my own. For years, I had no control over what happened to me."

Richardson was 14 when he was arrested, per the NYT, and was in prison for seven years. "People needed to hear that we really went through that," Richardson told Time, referring to the Burns documentary. "This really happened to us. People tend to realize that we were so young and naive that we were fragile — not just physically, mentally too. We weren't prepared for what we were about to endure."

Santana was 14 at the time of his arrest in 1989, per the Times, and served five years for rape and assault, according to the Innocent Project. The same NYT article reported that it was Santana's idea to do this show and tweeted at DuVernay back in 2015. "Ava was always my choice to do this series," he said. "I never met the woman, I didn't even know who she was, but I'd watched Selma — there's a part where [Martin Luther King, Jr.] is confronted by [his wife] Coretta with recordings [of him with another woman], and I felt like that was bold to put in the film. By showing that, it showed the human side of this man who was put on a pedestal. And it told me that she had no fear of telling the truth."