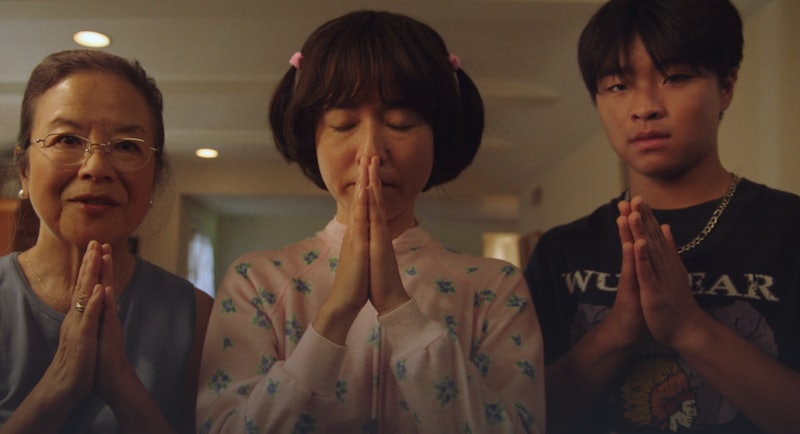 While everyone else is on nostalgia overload because Hulu’s PEN15 is middle school incarnate, I’m having a different kind of experience watching this very adult comedy. As someone born to a Japanese mom and white American dad, I very rarely see my family reflected on American television. But PEN15 depicts Japanese cultural beliefs in a multi-cultural American home in a completely normal, non-sensational way. And I am totally living for how this show celebrates my culture without all those racist Asian stereotypes about magic and mysticism.

PEN15 shows bits and pieces of Japanese language and culture throughout its 10-episode season, but episode three, "Ojichan," is the one that really stuck out to me. Though typically translated as "Ojiichan," the episode's name means "grandpa" in Japanese. Maya (Maya Erskine) and her family are praying at the family’s in-house shrine to honor her late grandfather on his birthday, when Maya’s mom (Mutsuko Erskine) mentions that their grandfather is always watching over them. She tells Maya, “He protects us and watches us all the time — when you’re walking down the street or when you’re brushing your teeth. All the time.” This completely horrifies Maya, because this also happens to be the episode Maya discovers masturbation.

American viewers probably interpreted Maya’s mom’s reaction as one of a mother just teasing her daughter for having a wild imagination. And PEN15 does play up Maya’s imagination by having her tell her friend Anna (Anna Konkle) that she “sees dead people” a la The Sixth Sense. But there’s a very Japanese element at play in that episode, and that’s what had me so tickled.

You see, many Japanese people have spiritual beliefs where their family members watch over them after they die, according to the Association of Shinto Shrines. They aren’t "ghosts" in the American sense of the term, but these spirits are believed to reside in lots of different places, like the home shrine, the place where they died, or the cemetery. Growing up, I was always taught my family was just there — as in, anywhere — watching over me and supporting me during my darkest times.

I spent summers in Japan watching my Obaachan (grandma) putting daily offerings of cooked rice and fresh water out in the family shrine. Sometimes she'd light incense and gently ring a singing bowl, and then she'd sit for a moment in what looked like prayer. I created my own makeshift in-house shrine when I was a teenager, but we never had an in-house shrine growing up in America. My mom told me you don't need physical things like an in-house shrine to have a strong spiritual connection. She said you just need to remember to be grateful and to express that gratitude to your family members, who are watching over you and protecting you.

She reminds me of this practice around July and August during Obon, a Buddhist tradition meant for commemorating your ancestors. My family and I haven't been back to Japan for an Obon Festival in a long time, but we always ask my uncle to visit my grandparents' graves on our behalf. And even though my family is always in my heart, they're particularly on my mind during Obon. I thank them for watching over me, for all of the happy memories we shared, and I ask them if they'll come to greet me when it's time for me to go.

When I heard Maya’s mom tell her to say “hello” to Ojiichan, I knew she wasn’t teasing her daughter; she was acknowledging the Japanese belief that Maya’s ancestors are watching over her, protecting her, and keeping her safe. It was a subtle detail — especially in juxtaposition to Maya’s guilt-visions of her grandfather that took the spotlight of the episode — but it was a teeny little line that warmed my hafu heart.

This show is such a refreshing take on how Asian culture is typically portrayed. In most movies and TV shows that use Asian culture as a plot point, Asian religions are warped into some mystical power that the good guy uses to defeat evil. Take Marvel's Iron Fist, for example, in which an Asian religious order is the source of both the character's power and conflict, as this Inverse piece points out. Asian religions are often treated like an element of fiction in American media, to say nothing of the fact that the diversity of Asian religions is flattened into a singular, stereotypical object. PEN15 flipped the script and showed that Asian religions are worthy of acknowledgement and respect.

Update: This story was updated on May 21, 2019, from its original version.