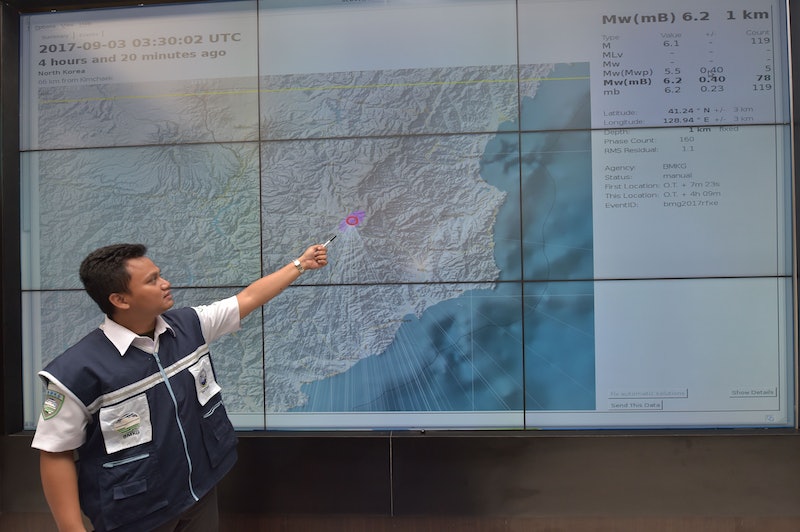 There's no doubt that North Korea tested a nuclear weapon at the beginning of September, but there was some debate on just how large the blast was. Now there's little doubt that it was quite big — big enough that you can see the effect from satellite photography. The mountain North Korea performed the hydrogen bomb test at sunk over 85 acres, and there are pictures to prove it.

The photos come from Jeffrey Lewis, head of the East Asia program at the James Martin Center for Nonproliferation Studies in California. He says that in the before picture Mount Mantap was 2,205 meters high, but then after the explosion, not so much. The scientists involved used precise measures to tell just how much the area sunk, but you can easily see the difference in photos that Lewis posted to Twitter. The mountain clearly looked taller before the weapon was tested.

Lewis used images from a satellite that is owned by Airbus. It uses Synthetic Aperture Radar to get the precise measurement of height. Unlike normal satellite images, these "radar satellites measures X-band microwaves, which can detect geo-precise surface changes when collected and processed together," Lewis explains. Airbus had the satellite record pictures from the same place in orbit twice, once before and once after the nuclear test. That means the two can be compared.

Those images alone are terrifying to look at, but wait, there's more: Evidently, North Korea has performed most of its tests at Punggye-ri nuclear test site. There are a series of tunnels under the mountain, where explosions can be set off. According to Melissa Hanham, a senior research associate at the ­Center for Nonproliferation Studies, it's lucky this test was performed where it was. "If they used a tunnel with less overburden, they might have blown the top off the mountain," Hanham told the Washington Post. Overburden is the amount of rock above a tunnel.

Hanham said these images prove that the blast is much larger than the United States and allies originally thought, meaning that the newer estimates are probably correct. Evidence suggests the blast was more than twice as strong as the original estimate, at 250 kilotons, according to 38 North, a program of the U.S.-Korea Institute at Johns Hopkins University's Paul H. Nitze School of Advanced International Studies. That would also make it 17 times as strong as the blast from when the United States bombed Hiroshima, Japan, during World War II.

In other nuclear news from the peninsula, South Korea Wednesday confirmed that an unstable form of Xenon gas was detected in the northeast of the country and off the eastern coast in the days following the nuclear test. This, they said, could not confirm the size or that the test was a hydrogen bomb, as the North has claimed, but it does confirm there was definitely a nuclear test.

The United Nations has passed sanctions in response. On Monday the Security Council unanimously approved the measure addressing the North's test. Now foreign companies are no longer allowed to "form commercial agreements with North Korean organizations," Al Jazeera reported. It could cost the country some $1.3 billion a year.

Even that, though, doesn't seem to have deterred the North. Recent satellite images show that the country is preparing for yet another underground nuclear test. Trucks and mining equipment have been seen at some of the other entrances to the nuclear test site.

"Such activity, coming shortly after the largest underground conducted at Punggye-ri to date, suggests that onsite work could now be changing focus to further prepare those other portals for future underground nuclear testing," yet another report by 38 North reads.

In other words, this last test was so strong that it damaged the test tunnels and the mountain above it to the point it can't be used again.