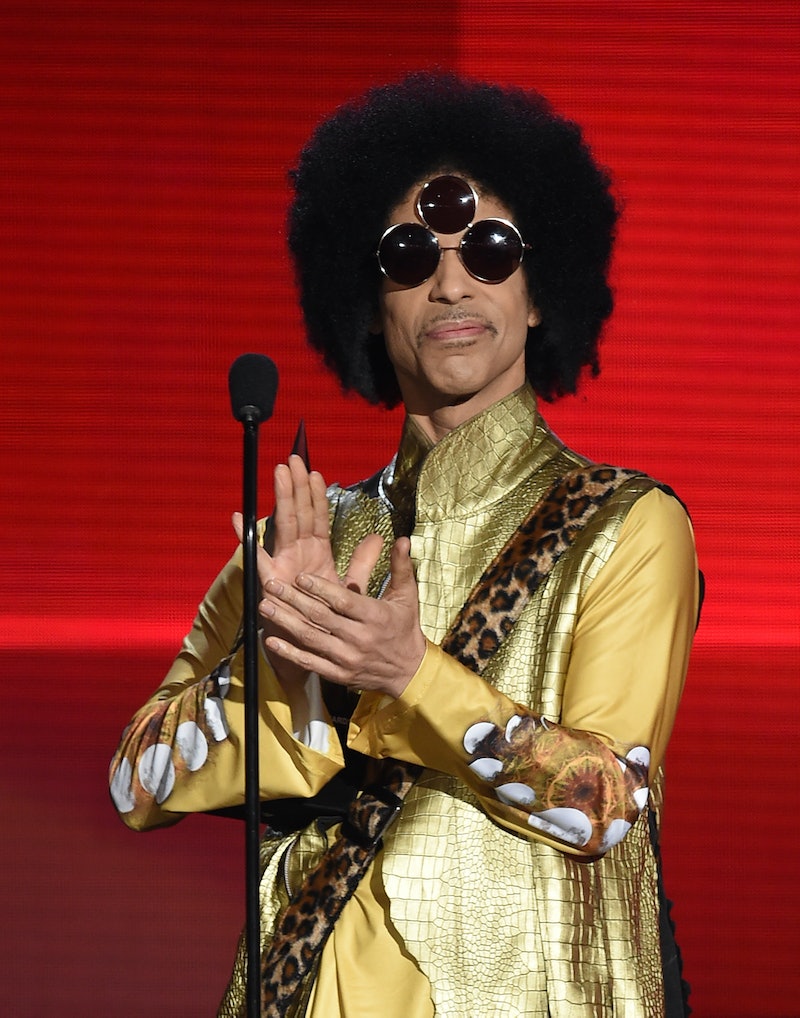 This April 20 marks the 15th anniversary of the release of Musicology, the Prince album that fittingly served as both the thesis and syllabus to the legendary entertainer's storied career — and proved that he would never allow himself to be written off as an artist. In the years leading up to Musicology's 2004 drop, Prince's star had seemingly diminished outside the realm of his devoted fandom, with the artist earning lackluster sales and reviews. Yet with Musicology, he not only made a major comeback, but made it perfectly clear that he would not take a righteous ride off into the purple sunset, no matter what his critics assumed.

At the time of the album‘s release, Prince was long past the days of his enormous early success in the '80s and '90s; the mind that had dreamed up Controversy, 1999, Purple Rain, Parade, and Batman was mostly living in seclusion at his Paisley Park facilities, and in a war with Warner Bros over creative control of his music. The widely publicized back-and-forth led to the artist infamously giving up his name to avoid certain contractual obligations to release songs, and the music he did put out was often criticized for being unimaginative or unfocused. He saw success with his live shows, spoiling his fans with incentives like early entry, Q&As and private aftershows largely based in his Minneapolis hometown, but the actual music he released wasn't having the same effect as his early smashes.

Musicology was a tool to celebrate, redefine, and study himself all at once — and it worked.

Pop culture was slowly but surely writing Prince off — but he refused to let it. In 2004, he decided to release Musicology, an album he described as having “no boundaries or formats. It is long overdue to return to the art and craft of music," according to Rolling Stone. Featuring no overt religious messages or excess, unnecessary material, the record was simple, Prince's first low-key album since 1991's Diamonds & Pearls. But its message was precise: that Prince was walking back in the room, commandeering a corner office, and refusing to be kicked out or taken for granted. Musicology was a tool to celebrate, redefine, and study himself all at once — and it worked.

Prince's opening lesson came in the title track. With lyrics like, “Wish I had a dollar / For every time you say / ‘Don’t you miss the feeling / music gave you back in the day?'", as well as “Keep that party movin' / Just like I told you / Kick the old school joint / For the true funk soldiers,” Prince reminded listeners that he could still get down like he used to. The song was designed to reignite the hearts of his fans and fulfill everyone’s craving for nostalgia, but also say that Prince was back. The song even ended with a radio flipping through a bunch of his classics, as the listener was told, "Don’t you ever touch my stereo!," while the Sanaa Hamri-directed music video saw "new school"-dressed men being denied entry to Prince’s "old school"-style show.

The rest of the album, while defined as R&B, was laced with different musical attitudes, from the the twisted hip-hop tale of “Illusion, Coma, Pimp & Circumstance" to “What Do U Want Me 2 Do”, a soulish croon of internal conflict, to "Cinnamon Girl," a dance track about colorism and prejudice faced by Muslim women after 9/11. Many of these songs, like "If Eye Was the Man In Your Life" and "Life o' the Party," strongly focused on a figure "you may never understand," i.e. Prince's vision of himself dating back to "I Would Die 4 U" off the Purple Rain soundtrack. Musicology represented a reinvigorated Prince, an artist unafraid to reflect upon his complicated work and persona, but always sure of his stardom. He used the album to transition to a legacy status — his career far from over, just in a period of adjustment.

Musicology was a crash course on music, Prince, and how neither can be controlled or reined in. He didn't speak much publicly about the album's message, unsurprising since he typically avoided talking about his past or personal life with the media. But he didn't have to, because it was all there in Musicology. The critical reaction, however, was mixed. Some loved it — Jaan Uhelszki for Harp described it as Prince's "best album since 1987's Sign o’ the Times,” and The Village Voice’s Robert Christgau wrote, “almost everything packs payback" — while others were less enthusiastic. Yet ultimately, Musicology earned Prince two Grammy wins and five nominations, connecting with the mainstream in a way his most recent releases had not.

Of course, Prince himself wouldn’t call the album a “comeback,” rephrasing an LL Cool J line from “Mama Said Knock You Out” to express his feelings in a 2004 cover story for Entertainment Weekly: “Comeback? I never went anywhere!” Instead, he focused on ensuring the album's success and winning back fans. Tickets to his Musicology Live 2004ever tour included copies of the album, and the shows sold out so fast that he had to add over a dozen more.

With Musicology, Prince educated fans on love, business, and life overall — his ultimate goal as an artist. As he told Entertainment Weekly in the 2004 cover story, “If [music] was run by musicians instead of people with M.B.A.s, everything would flip... this is what we need today. This is what I want to be — a musical mentor. To pass on the knowledge.” Even his collaborators are referred to as "alums" of his universe, such as former bandmate St. Paul Peterson, who said in a 2018 tribute after Prince's death, “I went to the College of Prince.”

Fifteen years after the release of Musicology, artists like Lil’ Wayne, Frank Ocean, and Jay-Z, among others, are using Prince as a model to take control of their work and images. He may be gone, but he's still educating many, especially about the idea of defining your own story. As he told EW in 2004, “You’ve read the magazines, the gossips. I’m not supposed to be here. But here I am.” With Musicology, Prince proved he would always be ahead of his time, and immortalized himself as an artist no one would dare underestimate.