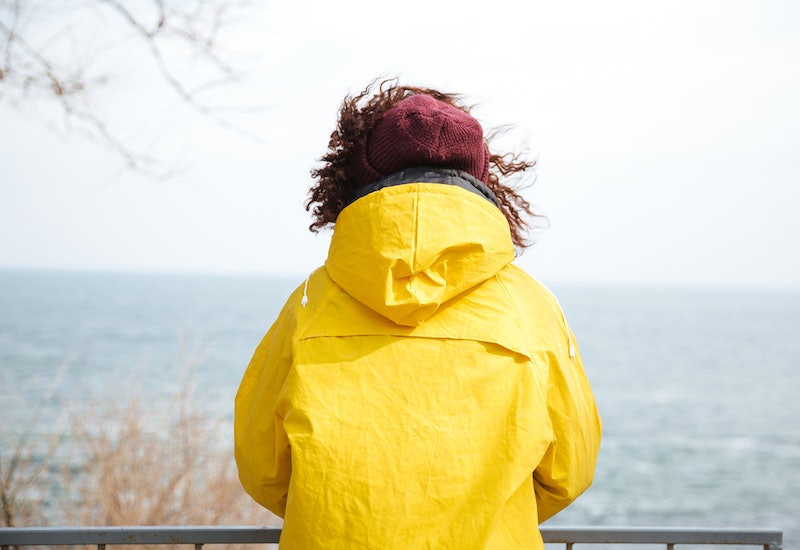 Post-traumatic stress disorder, or PTSD, is an anxiety disorder where the experience of a traumatic event has long-term, serious consequences. People with the disorder, who number 3.6% of all American adults, according to the National Institute of Mental Health, experience symptoms including flashbacks, nightmares and hyper-vigilance as a result of their traumatic experiences, sometimes many decades after the trauma itself happened. Neurologists explain to Bustle that PTSD actually has a complicated relationship with the brain — and that while there are clearly many ways in which it changes neurobiology, there are many unanswered questions about what it looks like and why.

"Severe and chronic post traumatic stress disorder has been found to change not only the function but the structure of the brain over time," Sean Clouston, Ph.D., associate professor of public health at the Department of Family, Population and Preventative Medicine at Stony Brook Medicine, tells Bustle.

It's sometimes difficult for researchers to know whether the anxiety disorder has caused physical changes in neural cells, or whether those physical characteristics were already there. Dr. Shaili Jain M.D., a PTSD expert and author of The Unspeakable Mind, explains that there are three main areas of neural tissue implicated in PTSD: the hippocampus, the frontal lobe, and the amygdala. The hippocampus, she explains, "is a part of the brain that's located in the temporal lobe where we process memories. It's smaller in people who have post-traumatic stress, but we don't know why." It's a case of chicken and egg, she notes: "We don't know if they were born with a smaller hippocampus and that somehow made them more vulnerable to trauma, or if it shrunk after they were exposed to trauma."

Post-traumatic stress isn't just a case of three independent areas operating poorly, though. The pre-frontal cortex, a part of the frontal lobe, and the hippocampus are part of a system that helps us solidify our memories. "It's the system that binds together multiple components of the memory," Dr. Israel Liberzon M.D., head of Texas A&M's department of psychiatry, tells Bustle. "These mechanisms are dependent on the integrity and appropriate function of hippocampus and prefrontal cortex and appropriate communications between the two." In people with the anxiety disorder, he says, researchers can track changes all through the prefrontal cortex and hippocampus, all the way down to their molecules.

Their brain turns on both brain and body pathways and activates stress response systems.

PTSD Changes How The Brain Works

Beyond those three areas, PTSD has broader effects on overall functioning. "In some studies, individuals with the condition have been found to have depletions in the brain's gray matter, along with changes to connections between sections of the brain," says Clouston. "These things are critical to your ability to learn, remember, and make new connections between ideas." You need gray matter (as distinct from white matter, your neural cells) as an essential part of cognitive health.

The other area that shows physical signs of PTSD is our neurochemistry, or the balance of chemicals, including hormones, that interact with neural tissue. Cortisol levels in people with the disorder are often lower than in others, Dr. Jain explains, while other chemicals, such as noradrenaline and adrenaline, are spiking. "These are released by the body when goes into fight or flight mode. We know that in people with PTSD, those chemicals are just floating around in their bodies, at much higher rates than they should be and for a lot longer," says Dr. Jain.

The neurotransmitter serotonin, which is so often the focus of mood disorder treatment, is also impacted by the condition. A study published in Molecular Psychiatry in 2016 found that people with PTSD often appear to have serotonin imbalances. This, says Dr. Jain, probably accounts for some of the mood symptoms that accompany post-traumatic stress, like depression, irritability and anger.

Flashbacks Show The Extent Of PTSD's Effects On The Mind

The long-term effects of PTSD are one thing, but what happens in the brain of somebody when they're experiencing a traumatic flashback — an episode where they seem to relive the traumatic event, with all of the accompanying sensations and emotions? Flashbacks are still mysterious for neurologists, because they aren't like a regular memory; the mind acts as if the trauma is happening all over again. "During a flashback," says Clouston, "the brain acts much like it would when individuals are actually experiencing a severely traumatic event, often the most stressful and frightening event of a person's life. Their brain turns on both brain and body pathways and activates stress response systems." The body takes cues from those signals and enters high alert, even if there's no threat whatsoever.

Studies have revealed that when it's experiencing flashbacks, a person with post-traumatic stress doesn't just seem to relive what's happened; their body actively goes through all its reactions to the event again. A study in 2016 published in Psychological Medicine, says Dr. Jain, looked at images of neural activity while patients were having flashbacks, and found that the visual cortex and the areas that control spatial and temporal awareness both showed a lot of activity.

The visual cortex, she tells Bustle, "would explain the vivid nature of the flashbacks, which is why people who have flashbacks feel they're reliving the trauma and it feels so real to them." The spatial and temporal areas, meanwhile, mean that the person undergoing a flashback loses their orientation in time and space; they're transported back to the point of their trauma, even if it's thousands of miles and many years away.

The brain also feeds the body information about how to act against the perceived repeated threat. When a flashback happens, says Clouston, the mind "starts the body's systems to facilitate the body's readiness to respond how it needs to: the heart rate increases and the body makes signals and changes needed to facilitate movement and action." This is why people undergoing flashbacks often move or act as they did when they were traumatized the first time; their neurobiology is directing their physical actions, whether it's hiding, fighting or running away.

There are still a lot of unanswered questions about the neurological effects of PTSD and how it changes the brain. Clouston points to one study published in Journal of Neuropsychiatry in 2018 showing that PTSD might cause the brain to degenerate over time, causing heightened risk of disorders like dementia. However, our understanding of the condition will grow as we get better technologies to examine neurochemistry and structure. Dr. Jain explains, "The picture we have is only as good as the tools that we have."

More like this
These 3 Signs Are Most Likely To Be In A Love Triangle — Here’s Why
By Kristine Fellizar
The 3 Zodiac Signs With Main Character Energy, According To An Astrologer
By Kristine Fellizar
How Ovulation Affects Your Sense Of Smell, Libido, & More
By JR Thorpe and Lexi Inks
5 Signs You Have A Toxic Relationship With Yourself
By Lexi Inks
Get Even More From Bustle — Sign Up For The Newsletter
From hair trends to relationship advice, our daily newsletter has everything you need to sound like a person who’s on TikTok, even if you aren’t.