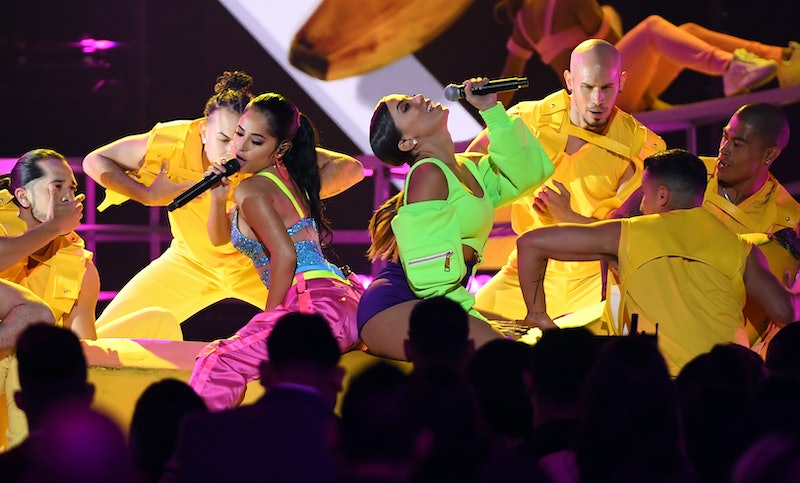 Latinx artists are dominating music in every way possible. According to a 2018 report by BuzzAngle, Latin music is currently more popular in the U.S. than country and EDM combined, and Primera Hora reports that from 2017 to 2018 alone, there was a 41% increase in streaming Latinx artists. This surge is due in large part to the popularity of reggaeton, an underground genre that began in the '90s as a combo of dancehall, hip-hop, and Latinx rhythms, and gained mainstream popularity in the early '00s. What's setting this new stage of reggaeton apart, though, is that women are leading the charge — a major switch from the genre's male-centric tradition.

Ever since the first wave of reggaeton emerged in Puerto Rico several decades ago, the genre has historically been dominated by male performers. Early success stories included artists like Daddy Yankee, Don Omar, and Nicky Jam. But even at its start, reggaeton had its share of female pioneers. Ivy Queen was one of few women who dominated reggaeton from the start. When the Puerto Rican artist challenged her male peers to old-school hype battles in San Juan’s The Noise in the late '90s, she gained respect and recognition, which only grew when she released empowering anthems like “Yo Quiero Bailar" that challenged sexist "rules" about body ownership and female sexual autonomy, on and off the dance floor. By flipping the script on the genre's norms, Ivy Queen became a reggaeton icon, paving the way for future artists like Karol G and Natti Natasha.

Yet while Ivy Queen is considered by many to be the “queen of reggaeton,” she’s not the only one who pushed the genre forward in its early beginnings. Lisa M had already found rap success in Puerto Rico before fully committing to reggaeton, and Glory’s appearances in some of the genre’s most memorable songs, like Daddy Yankee’s “Gasolina” and Hector y Tito’s “Baila Morena,” added to reggaeton's popularity over the years.

But recently, some female artists have taken reggaeton to a whole new level. In 2018, Becky G and Natti Natasha's collab “Sin Pijama” topped the Latin Airplay chart, becoming the first No. 1 in the chart's history credited to two women. Last year, Karol G and Natti Natasha became the first women in over four years to be nominated for Best New Artist at the 2019 Latin Billboard awards. And thanks in part to social media — where they can release their music and cultivate fanbases — their music is being heard loud and clear.

Some women in reggaeton attribute the radical shift to the overall rise in feminism in music, with more female artists refusing to conform to sexist stereotypes and supporting each other along the way. During the “Women in the Lead” panel at Billboard's Latin Music Week in April, Karol G said that despite there still being fewer high-profile women in reggaeton than men, she feels both sexes are now, finally, “fighting side by side" without animosity. “I feel like it was never with evil intentions,” the musician said about the historic lack of women in the genre. “It was simply a lack of listening habit towards females. Reggaeton lyrics and urban music have evolved from their beginnings."

But she added, "we’re [now] able to give our point of view in the songs.” Natti Natasha agreed, telling Billboard during the panel that female reggaeton artists collaborating "lets us show the complexity that exists among women."

Up-and-coming artists are taking full advantage of the changes happening within reggaeton. Musician Paloma Mami, for instance, has opted to not feature male artists in any of her songs. Instead, she uses singles like “No te Enamores” and “Not Steady" to celebrate female empowerment and independence. “It’s about time,” she says over the phone, when asked about the current state of reggaeton. “We’ve been listening to all these guys for all these years growing up. I want to be the girl that little girls listen to growing up.”

Mami adds that she believes her male peers have a responsibility to help uplift and promote female artists like herself. “We all have to support each other, no matter male or female,” she says. “It shouldn’t have to matter that we are women, they should be supporting us the same way they support their brothers. It’s a matter of compañerismo, a matter of respect for each other’s work.”

Becky G — who's experimented with reggaeton in her music — clearly agrees, saying on the Billboard panel that “it’s not just a girl’s thing. We can empower each other all we want but, at the same time, the men also need to take responsibility [to support us]." The singer added that in the coming months, she'd like to see more of her male peers saying, “‘Hey, I know this dope writer… or she’s a dope producer, let’s get her in the session.’" This, she believes, will help carve space for more female reggaeton artists to succeed. “It’s not that there’s a lack of talent or that there’s a lack of ambition on the side of women artists, songwriters and producers, but that there’s a lack of opportunity," Becky G said.

However, even though the genre has seen an increase in female artists, its inclusion problem is far from solved. The LGBTQ+ community, for instance, is rarely represented in reggaeton, with exceptions like the “lesbian reggaeton” band Chocolate Remix.

Latinx identity is complex, and reggaeton does not yet reflect the full diversity of its community. Yet the recent rise in female artists getting the chances to openly embrace sexuality, control their narratives, and define feminism on their terms is undeniably a major step forward.