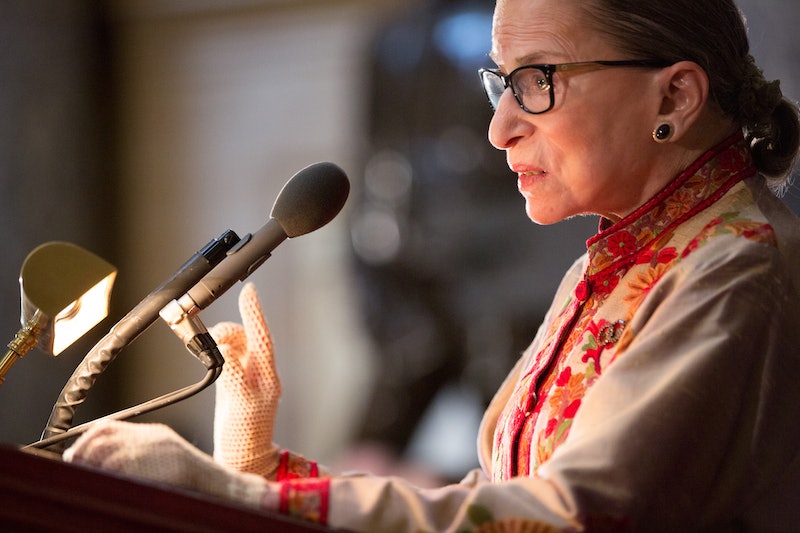 Apparently even Notorious R.B.G. can't escape being interrupted by men while she's at work. While it has long been known that men are prone to interrupting women, a new study has found the "manterrupting" phenomena even affects female Supreme Court justices. In fact, researchers have recently concluded that male justices have, over the years, reacted to the increase in women on the Supreme Court by upping their interruptions of them. But researchers also identified a key method female justices like Ruth Bader Ginsburg are using to fight back.

Northwestern Pritzker School of Law professor Tonja Jacobi and J.D. candidate Dylan Shweers studied Supreme Court oral arguments from 1990, 2002, and 2015 to compare how frequently female justices were interrupted by their male colleagues during times there were one, two, and three women sitting on the bench, respectively. Predictably, the study found that as women's representation on the Supreme Court bench increased, so too did the rate they were interrupted by men.

"Even when women become justices of the Supreme Court, they are given less respect than the male justices give one another, and receive less deference from male advocates," researchers concluded in a guest post for SCOTUS blog.

Yet researchers also noted that female justices would alter, whether consciously or not, how they spoke during oral arguments as they gained more experience on the bench. While female Supreme Court justices would reportedly use introductory phrases such as "may I ask" and "excuse me" when they were first appointed to the bench these phrases enabled them to be interrupted more easily. Over time they began to drop these polite prefatory phrases in favor of adopting a rhetoric more similar to their male colleagues.

"Three of the four women who have served on the court show clear downward trends in their use of polite phrasing," researchers wrote, noting that "very few" of the male justices showed a similar downward trend. While the majority of female Supreme Court justices were found to use less polite language over time, their usage levels did not always fall as low as the usage level many male justices were recorded as having when they first started on the bench. "After more than 30 years on the Court, Ginsburg still uses polite language more than either Kennedy or Alito did immediately upon joining the court," researchers concluded.

Yet men interrupting women may be more than just bothersome, especially on the Supreme Court. Researchers argued gender disparity in interruptions on the Supreme Court, known more commonly as "manterruptions," matter greatly as oral arguments play a significant role in determining case rulings. According to researchers, oral arguments help justices gather information and lay out persuasive arguments for other judges on the bench. "When a justice is interrupted, her point is left unaddressed, and her ability to influence the outcome of a case or the framing of another justice's reasoning is undermined," Jacobi and Shweers wrote.

More like this
Supreme Court Overturns Roe v. Wade
By Melanie Mignucci
Michelle Obama & Taylor Swift React To The Supreme Court Overturning Roe v. Wade
By K.W. Colyard
How Getting An Abortion Has Changed From The ’60s Through Today
By Amanda Chatel
Every Single Big & Small Way You Can Fight For Abortion Rights
By Tess Garcia
Get Even More From Bustle — Sign Up For The Newsletter