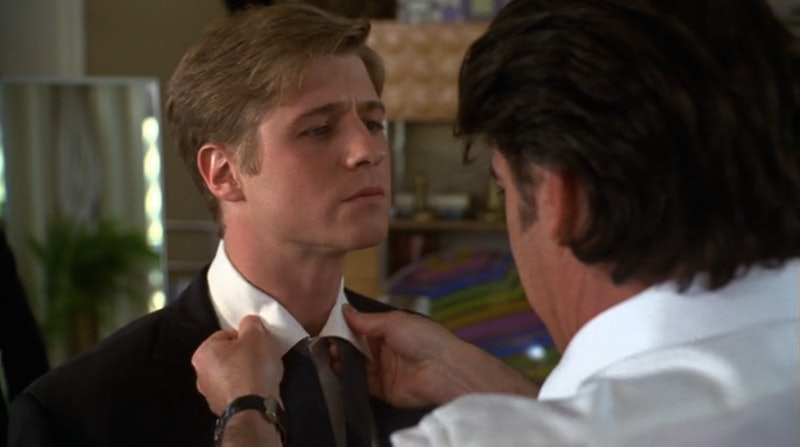 The first time we meet Ryan Atwood on The O.C. he is helping his brother steal a car. But soon, Sandy Cohen takes him in and turns his life upside down. It's easy to see how much the Cohen family changes Ryan's life, especially because the alternative is the teen dealing alone with his unpredictable mom and possibly ending up back in juvie. But Sandy does not deserve all the credit for Ryan's evolution. Ryan continued to change once he joined the Cohen family, and the Ryan in the first episode of The O.C. is different in a lot of ways than the one we see in the series finale.

At first, Ryan is reluctant to accept the Cohens' help and to participate in silly activities like Cotillion, but over time he is able to find a balance between his Chino self and his Newport self. He doesn't take up water polo and start driving a giant truck like Luke, but he does leave his life of crime behind and eventually stops punching people so much — a positive move for anyone.

Ryan goes through a lot during the series — his first love's death; not one, but two mothers with alcoholism; his disgusting brother. All of these things affect him and move his story forward. And by the end, he is ready get his Sandy Cohen on himself.

In the series premiere, Ryan is shown smoking a cigarette in front of the Cohens' house when he first meets Marissa. Sandy doesn't approve, of course, and apparently, Ryan doesn't go sneaking around behind his back, because he's not shown smoking again.

Also in the first episode, Ryan tries to buy a 7 and 7 at a swanky party. Unlike the cigarette situation, Ryan drinks again later in the show, but this being a source of drama fades out eventually.

Ryan is really serious in the beginning of the series and it takes a while for him to open up and become more relaxed. But he does eventually, and at one point, Sandy even comments on the fact that — whoa! — Ryan just made a joke. Ryan is capable of being funny, and the show does a good job of making any humor that comes from him seem natural and not like a sudden change in his personality.

He Starts Focusing More On His Future

Early on in the series, Ryan is asked by the Harbor School dean what he sees himself doing as a career, and he doesn't have an answer. He's never really considered his future when it comes to jobs. But, eventually, Ryan realizes he actually does have the chance to go to college and considers what this could mean for him. In the finale episode, it's revealed he's become an architect.

He Falls In Love With Taylor

The fact that Ryan falls in love with Taylor says a lot about how much he's changed as a person since the beginning of the series. To start, it would never have been believable that Season 1 Ryan would date someone like Taylor. (It was hard enough to believe in Season 4.) It also shows how was able to move on romantically after Marissa's death. On top of that, while he and Taylor have their own issues, it shows that he is able to have a relationship that isn't full of the more intense type of drama he had with Marissa (drinking problems, drug overdoses, helping imprisoned brothers move stolen cars... the list goes on).

His Relationship With His Dad Changes

Ryan's father, Frank, is in prison for most of the series, and doesn't appear until Season 4. At first, Ryan wants nothing to do with him, but by the end of the series they're on speaking terms. (Frank's relationship with Julie Cooper goes even better, though.)

He Stops Punching People As Much

Ryan loves getting into fights in Season 1. It doesn't even matter if the fight has to do with him (see: the Cotillion Ball fight between Jimmy and Holly's dad Ryan's hops into). But he eventually realizes that it's worth controlling his impulses so he won't get into trouble and screw up everything the Cohens gave to him. Still, if the situation calls for it, he's never afraid to step up.

He Gets Along With Julie

Ryan is usually at odds with Julie as she tries to do anything to cut him out of Marissa's life. But by the end of the series, Ryan and Julie are on good terms. They come together after Marissa's death, and she even ends up dating his estranged father.

He Goes From Getting Help To Helping Others

At the very end of the series finale, Ryan, the architect, asks a random kid on a bike if he's OK. It mirrors the situation from the beginning of the series when Sandy helped Ryan and really shows how far he's come. (Is that kid fine, though? Maybe Ryan is just overly helpful now and goes around asking every kid he comes across if they're good, even when they clearly are.)

Ryan feels uncomfortable and guilty about moving into the Cohens' house at first — and for good reason. His court-appointed lawyer is offering to have him move into his family's home. But as time goes on, Ryan feels more and more comfortable around the Cohens and they really become his family. He becomes much more willing to accept their help without putting up a fight as the show goes on.

Maybe that sounds a little cheesy, but in order to be able to accept the Cohens' help, Ryan has to come to terms with who he is. Among many things: His mother is an alcoholic who can't support him, he doesn't have a relationship with his dad, and, yes, he is from Chino. As time goes on, Ryan becomes more and more comfortable with himself and that lets him move forward.

And, on a less cheesy note, his haircut changes a lot, too.

More like this
Liz Feldman Explains The 'Dead To Me' Series Finale & Fan Theories
By Brad Witter
Twitter Can’t Get Over The One Thing Missing From 'GBBO's Tense Finale
By Darshita Goyal
'Tell Me Lies' Season 2 Is On The Way & The Cast Already Has Ideas For What's Next
By Gretchen Smail and Grace Wehniainen
The First Trailer For 'That '90s Show' Includes So Many Nods To The Original Series
By Jack Irvin, Alyssa Lapid and Grace Wehniainen
Get Even More From Bustle — Sign Up For The Newsletter